Not A White House Failure To Communicate, But An Aversion To Driving A Message 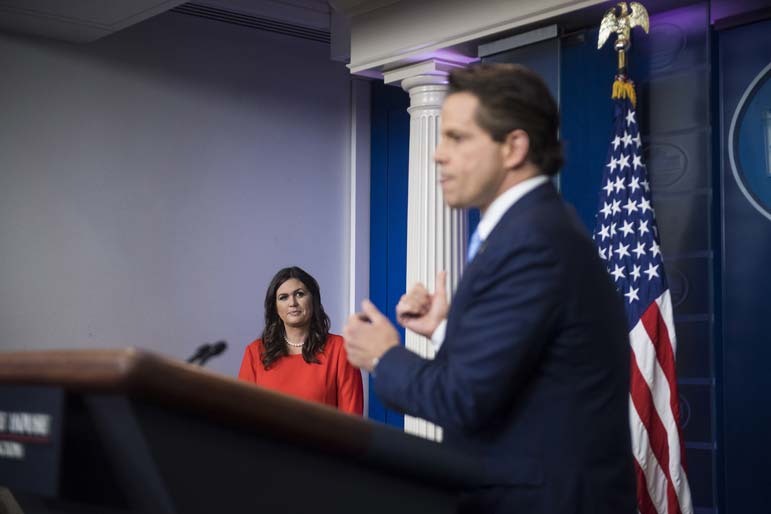 I don't have a degree in economics and I've never worked a day in the financial sector, but if asked I'm ready to run a hedge fund.

Hey, if Anthony Scaramucci is qualified to take command of the White House communications shop - his background: working at big trading houses like Fidelity Investments, Goldman Sachs and Lehman Brothers before setting up his own hedge-fund outfit - then surely I can convert my past work in political communications into sound investment advice.

This isn't to suggest that Mr. Scaramucci will fail at his new undertaking. If you saw his first turn at the podium at Friday's White House press gaggle, he doesn't lack for alpha-dog confidence. It's a take-no-prisoners, suffer-no-fools style that resonates with President Trump because . . . well, that's how Donald Trump got elected in the first place.

Still, one does wonder if the Trump White House fully appreciates what ails it - and how communications differ from raging against the machine, as did Trump in 2016, versus trying to coax a reluctant political system into going along with an incumbent's agenda as Trump now attempts.

The reason for the appointment carousel? Sometimes, it's as simple as shifting West Wing responsibilities. Other times, it symbolizes a bigger failure - the communications team taking the fall for the White House stumbling out of the gate (you can blame this in part on pop culture: in movies like Wag The Dog and tv sit-coms like Spin City, it's the communications hand who comes across as the weak link in the chain).


In each of those instances, the new administration went with a replacement with a background in politics and/or media. Clinton's Gearan was a newspaperman turned press secretary. Bush's Bartlett had worked on policy and campaign rapid response. Obama's replacements could point to political ad-buying and campaign strategist gigs on their resumes.

As one of Trump's most aggressive television surrogates, he obviously understands the world of sound-bite punditry and short argumentative bursts.

But getting a word in edge-wise isn't this White House's biggest need.

What we've got here - you're expecting me to say "failure to communicate" - is a failure to drive the conversation . . . by using more traditional means of strategic communications.

Take the recent Republican meltdown over Obamacare repeal. The President has tweeted on the subject and made passing references to passing a repeal bill in press q&a.

But here's the White House's dilemma. Obamacare is obviously flawed. But trying to sell the argument that it's fatally failed - and thus deserving of a euthanistic fate - is like convincing the world that the Titanic is going sink when it's still days away from the iceberg.

Rather than a war of words, what the Trump White House needs to consider is a new vista - literally.

Did it occur to the White House to send the President to, say, Arizona, the scene of genuine Obamacare drama (Aetna, citing financial risk and long-term uncertainty, notified customers in late June that it plans to exit Arizona's individual health-insurance market next year)?

Waltzing into Arizona carries with it political complications for the Trump White House. The state's GOP governor hasn't made much noise one way or the other about Obamacare repeal, whose effect on Arizona is subject to interpretation. Sen. Jeff Flake, a first-term Republican who's up for re-election in 2018, has been a presidential thorn in the side.

So what's a White House to do?

Try sending the man into the state. Hold meetings with voters. Sit down for interviews with local television and conservative talk radio.

Maybe Anthony Scaramucci understands this and we'll see a different approach come the time to sell another thorny matter such as tax reform or infrastructure investment.

In the meantime, one Mr. Scaramucci's first and smartest moves would be to tap into the communications reserve that comes with the GOP's political success over the past decade. That includes the President's would-be friends on Capitol Hill (292 GOP congressmen and senators, some with some very sharp press operatives) and state executives across the heartland (33 GOP governors skilled at making news in big and small markets).

It's one aspect of another challenge that plagues the Trump White House: the appointments void.

I was in the nation's capital last week. As far as the Trump White House's interaction with "The Swamp's" Republican establishment goes, three problems seem obvious: Republicans disqualified from administration jobs due to anti-Trump slights real or perceived (it's a movable bar - Scaramucci got a pass for his past transgressions); Republicans stuck in the appointments pipeline; Republicans who don't want to work for the Trump Administration because they see it as a career liability.

Only the White House can adjust its standards for what constitutes political black sheep. As for the clogged pipeline, it's likewise on the White House to gets it act together.

It's the latter category - right or wrong career move - that bears watching. Can the White House draw the best communications talent the GOP has to offer? Is it willing to pursue and woo the hacks and the flacks in the establishment crowd, lest such outreach seem to tarnish the Trump populist brand?

But if the Trump White House does gets it communications act together?