Voter by voter, GOP super PAC tries to separate the party from Trump 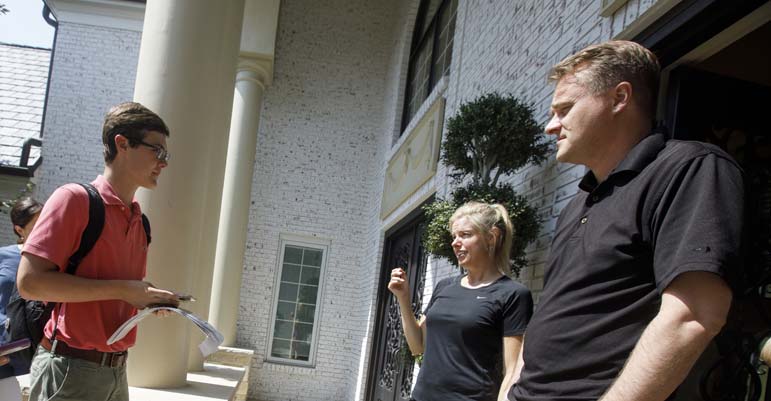 OMAHA, Neb. - It was a humid Saturday morning, four hundred and seventy-three days before the next election, and Jack Mowat was walking door to door to support his congressman. At home after suburban home, voters heard a knock, then heard the pitch.

"I'm with the Congressional Leadership Fund," Mowat, 17, told a voter in workout gear. "Do you support Congressman Don Bacon?"

The answer was yes. "Awesome," said Mowat, updating his doorknocking phone app. "And what would you say is your most important issue?" The answer: Bacon was a "military guy."

That was all Mowat needed to hear. As one of dozens of volunteers for the Congressional Leadership Fund (CLF), the deep-pocketed super PAC backed by Speaker Paul D. Ryan, R-Wis., he was on a months-long mission to knock on the doors of semi-frequent voters and tell them that their congressman was doing what they sent him to do.

In Nebraska's second district, where Bacon narrowly defeated Democrat Brad Ashford last year, the goal was to build up the Republican before Democrats had a chance to try and tear him down.

The CLF's multi-million dollar campaign, unfolding now in 20 targeted districts and expanding next year to 30, is an ambitious bet that the Republican House majority can be spared from a Trump midterm backlash. If it works, each endangered Republican will be reintroduced to voters as a post-partisan who delivers on their key issues; each Democratic challenger will be framed as a vote for Nancy Pelosi to snatch back the speaker's gavel, while empowering an anti-Trump "resistance" that only wants to wreck the country.

In an interview at the CLF's Washington office, where the targeted districts are scrawled on the wall across from his desk, the PAC's executive director, Corry Bliss, said the strategy was the culmination of what he'd learned in a run of winning campaigns. Veterans of Bacon's 2016 campaign were running the CLF effort in Omaha; they'd scoured local high schools for volunteers who'd work for free to help their congressmen, gaining political experience while no other campaigns were underway.

For 2018, the strategy is to do more of the same, framing races as a choice between local heroes and "resistance"-obsessed Democrats, on a hoped-for $100 million budget.

"Donors get really excited about this," said Bliss. "For the cost of one TV ad buy, you knock on tens of thousands of doors. We do a microdata survey in every district, and our goal is to come out of it in the 60,000-80,000 voter range. If we can switch 20,000 votes in the district, that's the difference between winning or losing."

The ads and materials being distributed by the group make no mention of the president or which party currently runs Congress. A door-hanger for Rep. David Valadao, R-Calif., whose district voted heavily for Hillary Clinton last year, tells the story of how his family built a successful dairy farm and how he wants to "fix our broken immigration system." A door-hanger for Rep. John Katko, R-N.Y., who represents a swing seat in upstate New York, calls him an "independent voice" who's "working to combat the heroin and opioid crisis" and ensure "clean, safe drinking water."

In Omaha, there were already targeted ads, aimed at Trump supporters, reporting that "Don Bacon is fighting for President Trump's agenda." But most of the campaign for Bacon was built around his long military service, especially his years commanding the district's Offutt Air Force base. "We have a list of 41,000 people who say: That's my issue," said Bliss.

But the effort to portray Bacon as Offutt's savior had already raised eyebrows. The door-knocking campaign had been complemented by a digital ad campaign that thanked Bacon for fighting to "keep Offutt Air Force Base open." When the Omaha World-Herald pointed out that there was no serious effort to close the base, Bliss explained that Bacon offered a "stark contrast to Democrats' opposition, led by Nancy Pelosi, to strengthen our military."

That line was familiar to Ashford, the defeated Democrat who announced last week that he would run again in 2018. In an interview in the district - interrupted, briefly, by a barista who recognized him from an Obama rally - Ashford suggested that the early CLF buy was a sign that opponents took him seriously. In 2016, CLF was among the groups that battered him for supporting Pelosi. Asked if he would support her again, Ashford said it wasn't clear whether she'd even run for speaker again and pivoted to a criticism of Ryan.

"For me, the criteria is a willingness to work with the other side," said Ashford. "I don't think you can overstate how ineffective these guys are at that. Paul Ryan and his team can come in here with guns blazing, like they did before, but they have nothing to show for it. They can't govern."

The CLF's strategy, though, was to convince voters that Bacon could govern - and that as loyal Republicans, they should want an ally instead of a Democrat who would wreck everything they loved. Ashford, said Bliss, would be driven to the left to please Democratic activists and put away a primary challenger, making a contrast race even easier.

Democrats, not cocky, were also not convinced. The CLF's well-funded campaign was limited by laws that separate campaigns and super PACs and some of its voter targeting might duplicate what Republicans were doing already. "Resistance" groups, demonized in TV ads, were also organizing in Nebraska's 2nd district like they were across the country - hence the CLF's need to counteract them.

Veterans of the 2010 and 2014 Democratic routs were also skeptical that Republicans could divorce themselves from Trump. Jesse Ferguson, who joined the Democratic Congressional Campaign Committee during the 2010 cycle, watched dozens of Southern and Midwestern Democrats run on local issues and get dragged under by an anti-Obama wave.

"Candidates can sometimes be successful creating their own brand and demonstrating to voters their independence but political parties can't separate themselves from their political leaders," said Ferguson. "For most people voting in 2018, the election will be a referendum on President Trump and whether Republicans in Congress have done their job to be a check and balance. Spoiler alert: they haven't."

On Saturday, on the trail and in the CLF's western Omaha campaign office, Trump was an afterthought. At the doors, Mowat met fan after fan of Bacon; a voter named Gina Engel praised him for acting fast on a VA issue, while a voter named Brad Schroeder said the whole Republican agenda was on track.

"I'm not worried about Obamacare," Schroeder said. "That's going to collapse by itself."

At the office, decorated by homemade Bacon signs, around 20 volunteers were making calls from the CLF's script, which focused on how "Congressman Bacon knows what it takes to protect our country." Asked how he'd rate Trump's performance in office, Mowat emphasized the confirmation of Neil Gorsuch to the Supreme Court, and the unfurling of regulations that didn't always get coverage.

"The way Trump has gone about the business of passing legislation has been a problem sometimes," said Mowat. "You've got voices like Sean Spicer, who were really boisterous. I wish Trump would speak a little bit less and focus a little bit more on his policy."

Mowat sat down to make calls, while his fellow volunteers kept reading the script, which did not mention the president at all.