Chief Justice Roberts gets personal with a special audience 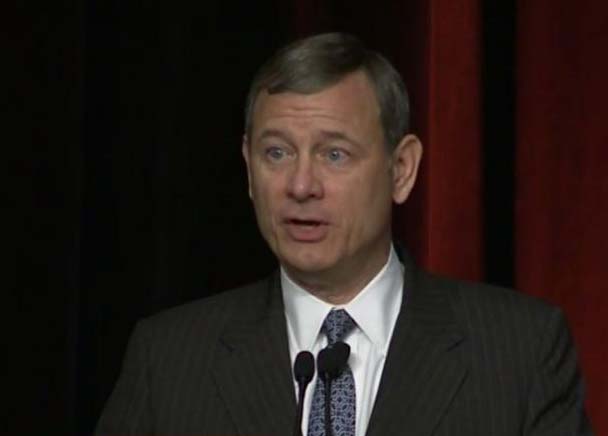 But none probably meant as much as the statement he handed down on a rainy, early June morning in a small New Hampshire town.

It was the ninth-grade commencement address for the Cardigan Mountain School, an elite boarding school for boys grades six through nine. Sitting up front under a large white tent as John Glover Roberts Jr. took the stage was graduating student John Glover Roberts III.

In Canaan, New Hampshire, Head of School Christopher Day said, the 17th chief justice of the United States would always be known as the dad of "our Cardigan Cougar Jack."

You may remember Jack Roberts from his own moment on the national stage 12 years ago, when his father was chosen for the Supreme Court. As President George W. Bush revealed his choice in a formal White House ceremony, John and Jane Roberts struggled to simultaneously ignore and control the rambunctious boy in the short-pants ice-cream suit. His father later said Jack was pretending he was Spiderman, shooting webs from his hands.

Roberts' commencement address was not publicized in advance, but it was recorded by the school, uploaded to YouTube and is slowly gaining attention. Several readers emailed the link to me. One person wrote, "I'm a Democrat and I can't stand the guy's views, but I was in tears."

There is nothing about the Supreme Court or the law in the short speech, although each graduating Cougar received an autographed, pocket-size Constitution along with his certificate.

Instead, the address was personal, understated and popular probably because it touches on universal themes, such as a parent's worry about whether he or she is making the right decisions for their child.

Driving through the gates after leaving a student at Cardigan, Roberts said, parents travel a "trail of tears" to an "emptier and lonelier house."

Roberts is considered one of the Supreme Court's better writers, whose public addresses show a quick wit and professional timing. He first asked the Cardigan students to turn and applaud their parents and others who had guided them.

He joked that he would later be able to report that his speech was "interrupted by applause."

"From time to time in the years to come, I hope you will be treated unfairly," Roberts said, "so that you will come to learn the value of justice."

Betrayal "will teach you the importance of loyalty." Loneliness will instruct "don't take friends for granted." Pain will cause someone "to learn compassion."

A commencement speech is supposed to offer "grand advice," Roberts said, so his first was to recognize the exalted perch from which they started - a school with a 4-to-1 student-teacher ratio, where students dine in jackets and ties, and tuition and board cost about $55,000.

Through his son, Roberts had come to know many of the students, he said, and "I know you are good guys."

"But you are also privileged young men, and if you weren't privileged when you came here, you're privileged now because you have been here," Roberts said. "My advice is: Don't act like it."

At their next school, he urged them, introduce themselves to the people "raking the leaves, shoveling the snow or emptying the trash." Learn their names, smile and call them by name. "The worst thing that will happen is you will become known as the young man who smiles and says hello," he said.

"I have no advice for you."

In his speech, Roberts quoted Socrates, and, not surprisingly, he ended it with the words of "the great American philosopher, Bob Dylan."

The song he quoted at the commencement speech, of course, was "Forever Young." Roberts is an unusual parent. Now 62, he and Jane married rather late in life. Their contemporaries are welcoming grandchildren, while they have two high-schoolers, Jack and his sister Josephine.

The wishes expressed by Dylan for his son, Jesse, are "beautiful, they're timeless, they're universal," Roberts said.

But the phrase that gives the song its title and refrain - forever young - is unrealistic, the chief justice said. It can't come true.

"That wish is a parent's lament," he said.