A new idea about Amelia Earhart 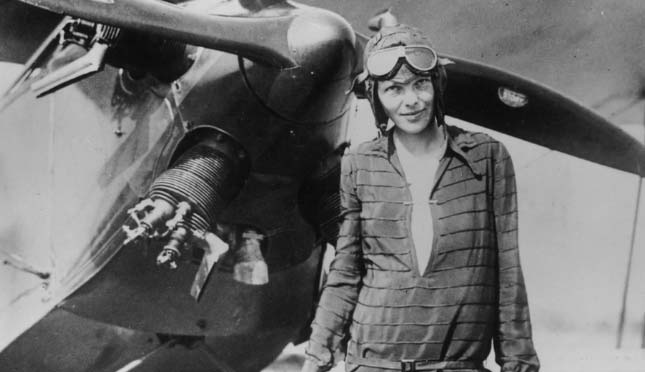 At the age of 75, I'm coming to realize that I may never know for certain what happened to Amelia Earhart and her navigator Fred Noonan on their round-the-world flight that disappeared in the South Pacific in July 1937.

I have been in love with her forever and it's painful to have no resolution, only the same old theories.

Like Hansel and Gretel disappear into the woods and some think they got baked by the witch and others think they were deadly allergic to gingerbread containing glutens. I like to think Amelia was rescued by Howard Hughes and lived with him secretly at the Royal Flush in Las Vegas, had a child, and gave him up for adoption by my parents John and Grace Keillor in Anoka, Minnesota, but it's a theory based on alternative facts and has been suppressed until now.

A recent TV documentary tries to prove she crashed and was captured by the Japanese and it brings forth a blurry photograph of a dock on Jaluit Atoll in the Marshall Islands and a slight woman with short-cropped hair sitting, her back to the camera, a hundred feet away, who purportedly is our Amelia.

We want it to be her, but it could also be your Aunt Sadie of Schenectady.

Meanwhile, a Japanese gentleman comes along to say he spotted that very photograph in a book published in 1935, two years before the flight.

It is hard to believe that one of the most famous women in the world could walk away from a crash in a populated area, then vanish without anyone taking note. Very hard.

I can live with the mystery of Jimmy Hoffa's disappearance --- he's gone, it's done, bada bing bada boom.

I don't care about the identity of Jack the Ripper.

I am satisfied that Lee Harvey Oswald fired the shots that day in Dallas.

It matters little if Edward de Vere or Christopher Marlowe or the Duke of Earl wrote Shakespeare's plays, let's just enjoy them.

My faith in the Resurrection does not depend on the authenticity of the Shroud of Turin.

Bigfoot is a fake, ditto the Loch Ness Monster.

D.B. Cooper died; parachutes are no cinch for jumping out of a jetliner and into a national forest.

Stonehenge is a circle of ancient stone blocks erected by some people for some purpose, probably religious: I don't need to know any more.

But I need to know about Amelia.

She was a sweetheart, a Kansas tomboy who was not out to make a statement so much as she simply loved to fly and feel the wind in her hair. In newsreels, she grins as she climbs out of cockpits, a dashing feminist in the Age of Dowagers.

She wore pants. She was lithe and limber. She enjoyed her fame. She flew solo across the Atlantic, solo from Hawaii to California, she was the forerunner of the spirited feminists we've known and loved, who bore no grudge against men but prevailed thanks to wit and smarts and perseverance and a terrific smile.

OK, she was not a great pilot. She was careless at times. She was a self-promoter who married her publicity guy and agent. She used her fame to pitch Lucky Strike cigarettes, Beech-Nut chewing gum, Longines watches, Mobil Oil and her own line of women's clothing. She was no Dorothy Day or Pearl Buck.

I forgive her all of that for her gumption, her ebullient spirit in the midst of the Great Depression, and also for the fact that, in 1913, when she was 17, she lived in St. Paul, a few blocks from where I live, and attended Central High, as her alcoholic father struggled to hold onto his job at the Great Northern Railroad.

In fact, 1913 was the year my dad was born. I am not putting forth the theory that the 17-year-old Amelia moved to St. Paul to hide her pregnancy and that she gave up the boy to my grandparents Dora and James Keillor of Anoka, but the truth is that Dad was more glamorous than anyone else in his family, obviously an import. He had a big romance with my mother and they eloped in 1937, the year the plane went down.

Mere coincidence? We may never know for sure.

The past is wreathed in shadows as we fly on into the mists, looking for an island that according to our maps is somewhere out ahead and if not, we will be swallowed up by history.

May it be kind to us all.