The Dems aren't being honest about health care 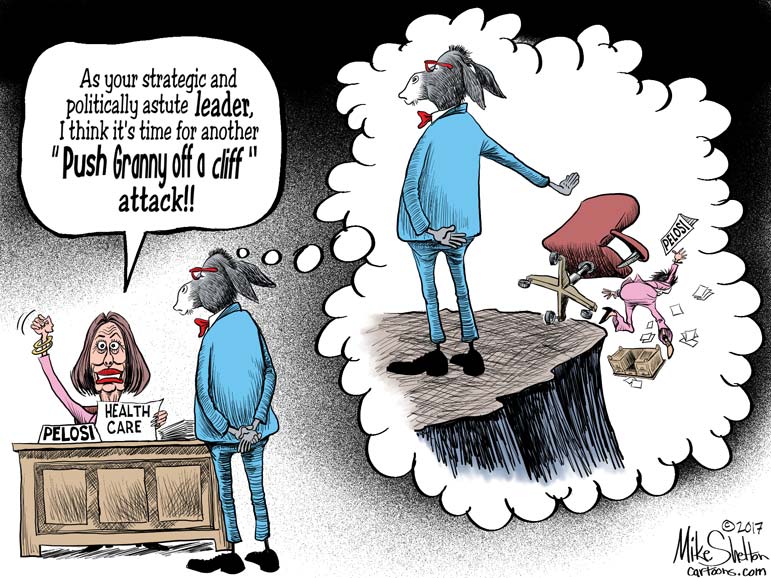 The Democrats and their allies in the media want you to believe two conflicting "certainties" about the recently passed House Republican health-care bill.

First, they want you to think that this bill doesn't amount to anything -- that it's not a victory for Trump, will never become law, and has been completely disregarded by the Senate.

Second, they want you to think that Republicans' repeal-and-replace bill is a catastrophic development for the GOP and the nation - that it will cost Republicans their majority, is certainly political suicide for the party as a whole, and is already adversely affecting the health of many Americans. But the health-care bill simply cannot amount to nothing on the one hand and deal a fatal blow to the entire Republican Party and be a plague on the population on the other. In listening to House and Minority Leader Nancy Pelosi, D-Calif., and Senate Minority Leader Charles E. Schumer, D-N.Y., one is led to believe that the pain and suffering caused by the Republican health-care bill will be unbearable, that widows and orphans will be dropping like flies.

Even former President Barack Obama took a break from his jet-setting, yacht-sailing life to prevail upon Congress the need to exercise "political courage" in not repealing Obamacare.

The Democrats' comments are just partisan spin meant to distract from the real story - that liberals' beloved Obamacare is falling apart. Since the House's successful repeal-and-replace vote, the liberal media has relentlessly supported Democrats' most extreme pronouncements. Politico embraced the warped narrative about the bill's campaign consequences, publishing a story Saturday with the headline "Obamacare repeal vote upends 2018 House landscape."

But buried deep in that story are wise words from veteran GOP strategist Curt Anderson, who appropriately noted, "Those who think Republicans will be defeated ... because of this vote ... are either in a parallel universe, or have been asleep for the past seven years. The notion that Obamacare is suddenly popular and will be missed is a mirage that seems real during the fog of war, but will disappear as you get closer to it."

He's right. Obamacare is not popular now, and it definitely was not popular in 2014 when Republicans took control over the House and Senate for the first time in eight years. Just look at the CNBC report indicating that 60 percent of small-business owners support a repeal of Obamacare. They are the engine of job creation in the United States, they understand how harmful Obamacare has been to business.

Still, leave it to CNN's always predictable Don Lemon to argue that Obamacare is "collapsing" only because President Donald Trump is "causing uncertainty among insurers." Give me a break.

But the left's deceptive outrage does not end with Democratic congressional leaders or Don Lemon. The award for the most pretentious, sappy and over-the-top production goes to Rep. Joe Kennedy, D-Mass., whose speech on the House floor was edited by a liberal organization to include a solemn violin soundtrack. I'm serious. Striking a made-for-bad-TV pose, Kennedy argued that the repeal of Obamacare "rejects ... common humanity and continues the administration's calculated attempt to divide up our nation." And the New York Times' Charles Blow similarly weighed in with the wild overstatement that "(w)hatever eventually comes of the bill, the death threat it poses for many Americans may well be a death wish Republicans have just issued for their own careers."

It's all a tad too much.

When Republicans voted to repeal and replace Obamacare last week, they fulfilled a major campaign promise, advanced the president's agenda, and demonstrated the party's commitment to addressing the concerns of struggling Americans and taking the foot of Obamacare off the neck of small businesses, even as the Democrats refused to come to the table.

I can't help but question whether Democrats really think people are buying the argument that Republicans don't just want take away your health care, but want you dead, too. Does the left really believe people are so gullible, so naive? Maybe they just don't have anything affirmative to say.

I think the left is dreading the prospect of seeing a strong Republican Party get its act together and keep its promise to repeal and replace Obamacare. And, if this is the debate they really want to have, the Democrats' drama and faux anguish only serve to damage their credibility.