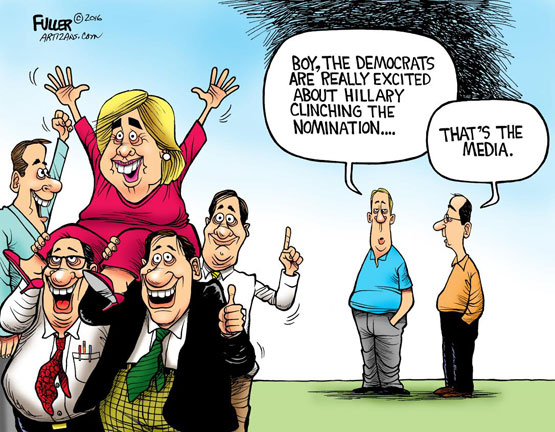 "The tone of Trump's press coverage during the last month of the primaries was negative," writes scholar Thomas Patterson. "The mostly favorable coverage he had received earlier in the primary season had turned sharply downward. Negative statements about his candidacy outnumbered positive statements by 61 percent to 39 percent. His coverage was more negative than that of any other victorious candidate of either party at any stage of the primaries."

The explanation is not terribly complicated. The Harvard study looks at two kinds of campaign coverage -- on one hand, horserace and process stories, and on the other substance, or issue, stories. Like so much academic press analysis, the study rues the dominance of horserace coverage.

Good or bad, Patterson concludes the emphasis on horserace helped Trump in the early weeks of primary and caucus voting; Trump's coverage was at its most positive when the campaign was in its most intense horserace stage. Coverage at that point in any race is about who's winning, who's losing, who's moving up, and who's moving down. Trump was moving up.

But then, as Trump took command and there was progressively less suspense in the race, the emphasis on horserace went down -- to 57 percent midway through the campaign, and to 40 percent in its final month -- while coverage of substance went up. According to Patterson, issue coverage was 12 percent of coverage in the middle stage, and 16 percent in the final month.

Issues coverage of Trump was negative from the beginning; it's just that there wasn't much of it in the early, heavily horserace period. But when the horserace died down, there was more issues coverage, and it was just as negative as always. Presto -- the overall coverage became more negative.

"The unfavorable tone of Trump's coverage owed to a shift in its content," writes Patterson. "The primary victories that moved him ever closer to a delegate majority were a source of positive news. But victories in the absence of competitors are less newsworthy, opening up news time and space for other subjects.

In the campaign's final month, journalists increasingly probed Trump's character and policy positions, framing them through the lens of Trump as a possible president rather than Trump as a striving candidate. News references to Trump's character and policies, which in earlier stages had never accounted for even as much as 10 percent of his coverage, jumped to 19 percent of it. The tone was cutting. Negative statements outpaced positive ones by 10 to 1."

Some Republicans, at least the ones who strongly support Trump, will attribute the negativity to media bias rather than any coverage "shift in content." But Trump's amazing run through the primaries did keep a lot of journalists and analysts transfixed on the amazing run. Once it was over, and Trump was the Republican nominee, there was never any doubt that would change, for whatever reason.