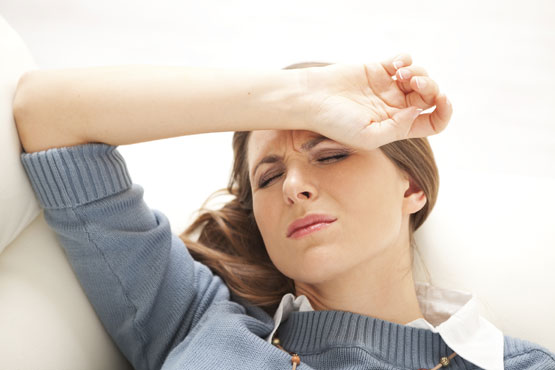 Alana Broe had hoped college would mark a turning point in her health.

Since third grade, Broe had battled a constellation of ailments that had kept her home from school more times than she could count. She had frequent stomachaches and migraines, and seemed to catch every virus that swept her high school. Even so, she pushed herself, taking AP classes, running track and playing club volleyball; sports and academic achievement were expected in her family.

College promised a respite. For the first time in years she would not be playing sports. She would have time to take better care of herself and make new friends who didn't know her as "The Hypochondriac" -- as a coach had dubbed her in a public dressing-down that still stung.

So when her freshman year at an Alabama college turned out to be the sickest period of her life, Broe felt "extremely defeated" and genuinely worried about her future.

A friend's advice -- coupled with subsequent testing -- revealed that she had a much-publicized disorder, a revelation that seems most surprising because it was overlooked for so long.

Although the news required a radical change and the knowledge that she will have to manage its effects for the rest of her life, "I was thrilled to have a diagnosis," said Broe, who is now 22.

For nearly as long as Broe can remember, her stomach hurt.

Her childhood in suburban Atlanta was marked by numerous trips to the pediatrician, who invariably diagnosed a virus. The dull ache in her lower abdomen made sitting difficult; lying in bed seemed to relieve the pain. To settle her stomach, she would nibble on crackers or bread.

Her mother, a labor and delivery nurse, was as baffled as Broe's pediatrician about the cause of her pain. "My mother knew enough to know I wasn't faking," Broe said. "I loved school and hated to miss it." Her grandfather, a surgeon, was also at a loss. But Broe's teachers suspected that her stomachaches were a reflection of the social stress she felt at school.

This wasn't an outlandish theory. Broe's absences were so frequent that her elementary school classmates devised a "game" guessing how many days she'd be out that week. When she did come to school, she was teased.

When Broe was 12, her mother took her to a pediatric gastroenterologist. He ruled out ulcers. "She is a high achiever and strives for perfection," the doctor wrote, and sometimes experiences "stress related to this."

The specialist, who did not order blood tests, concluded that she suffered from visceral hyperalgesia -- essentially, a highly sensitive stomach. Among his recommendations: Minimize stress.

She was repeatedly tested for mononucleosis, a common virus that causes fatigue. Sometimes when her headaches became severe, she would leave class to take naps in the school infirmary. She took more vitamins: Blood tests showed that she was anemic and deficient in vitamin D. More sleep didn't seem to boost her energy. After eight hours she awoke feeling exhausted, not energized.

Volleyball provided something of a refuge: When she was playing, she did not notice the pain. "I think I just compartmentalized it," she said.

One of the lowest moments occurred during her senior year, when one of her coaches, in front of the team, accused her of being a hypochondriac, a characterization that seemed to resonate with her teammates. Broe wondered if the coach was right. "I'd question myself and wonder, ŌĆśWhy am I always sick?'ŌĆē"

Her attendance that year was so spotty -- she missed more than 20 days -- that the dean of her private school told her that if she missed any time during the month before graduation, she would be unable to get her diploma with her class. By then Broe had turned down several athletic scholarships to colleges, fearing she would never be able to compete all four years.

She also decided that in college, she would not play sports at all, "which had never really been an option in my family." Not playing would free up her time to take better care of herself, she thought. In contrast to high school, she planned to take a light course load her freshman year.

Before she left for school in the fall of 2012, her pediatrician took 13 vials of blood to test for a host of potential illnesses but found nothing. "She told me, ŌĆśAt least we know there's nothing serious,'ŌĆē" Broe recalled.

During her freshman year. Broe felt worse than ever. "I was nauseated every morning when I woke up, I had piercing migraines and I had to take a nap or lie down after every meal," she remembered. Her diet consisted largely of student fare: grilled cheese, canned soup and microwaved quesadillas. She gobbled over-the-counter pain relievers to feel well enough to get to class.

On the days she was too sick to get out of bed, she would curl up in her dorm room, eating Wheat Thins and relying on friends to bring her water and food. A few times she was in so much pain that she literally crawled to the bathroom.

Her visits to the student health center followed a pattern. "I guess you have the flu again" seemed to be the habitual response, Broe said.

She decided that maybe this was her new normal. A month later, a friend mentioned that her own stomach problems had greatly improved after she adopted a diet devoid of dairy products and gluten, a protein found in wheat, rye and barley.

"I thought gluten-free was just too hard," said Broe, who decided to see how she fared without dairy. After a month she noticed a slight improvement.

In May 2013, soon after she returned home from school for the summer, Broe consulted Atlanta gastroenterologist Marc Sonenshine.

Sonenshine said he noted Broe's decade-long history of abdominal pain and the fact that she had undergone both a CT scan and an ultrasound, neither of which had found anything. He decided to order a blood test for tissue transglutaminase, or tTG, which screens for celiac disease, a chronic intestinal disorder caused by an allergy to gluten. Broe had never been tested.

The results were unequivocal. A tTG reading over 4 units per milliliter indicates probable celiac disease. Broe's level was 94; another test also pointed to celiac.

The next step in confirming the diagnosis was an endoscopy, a procedure that involves snipping tiny samples of tissue from Broe's small intestine for a biopsy.

The biopsy, performed a few weeks later, was definitive: Broe "had a pretty slam-dunk case" of celiac disease, Sonenshine said.

Celiac disease affects an estimated 1 in 133 Americans, most of whom do not know they are affected. The disorder runs in families -- Broe's cousin has been diagnosed with celiac -- and is more common in women and Caucasians. In people with the disease, consuming gluten or something that has come into contact with it -- such as water used to boil wheat pasta -- triggers an autoimmune reaction that damages the villi, tiny projections in the small intestine that absorb nutrients. The result is inflammation and long-lasting damage to the villi, which can cause malnutrition resulting from malabsorption.

Although celiac is mostly associated with GI symptoms -- abdominal pain is among its most prominent features -- the disease can also cause anemia, fatigue and headaches as well as depression. Despite the publicity surrounding gluten-free diets, celiac disease remains underdiagnosed: Experts estimate that fewer than 20 percent of affected Americans know they have it.

"There are ramifications for not making the diagnosis," Sonenshine said. These include osteoporosis, infertility and anemia. But, he noted, celiac is "very treatable with lifestyle modifications" -- namely, avoiding gluten, which is found not only in food but also in toothpaste, vitamins and other products. It was certainly in the crackers that Broe ate believing they settled her stomach, and it was probably in the vitamins and some of then over-the-counter-medicines she took.

Broe said she was delighted to finally have a diagnosis. Avoiding gluten initially was difficult, she said, but after a month on her new diet, she felt markedly better. A follow-up biopsy in February 2014 showed that the damage to her intestine had healed. Broe is scheduled to graduate in May and has been accepted to law school next fall.

Adjusting to her diagnosis has not been without bumps. Broe said she has gained 20 pounds and continues to battle skepticism about why she can't eat gluten. "Gluten-free," she said, has become a shorthand for fad -- a diet undertaken by people who claim they have a food allergy when they don't, but merely prefer to avoid certain foods.

Previously:
• A mom's discovery about her daughter's odd teeth leads to a shocking revelation
• For more than two years, he lived with a diagnosis of fatal dementia. He never had it
• What caused a newborn twin's swollen legs