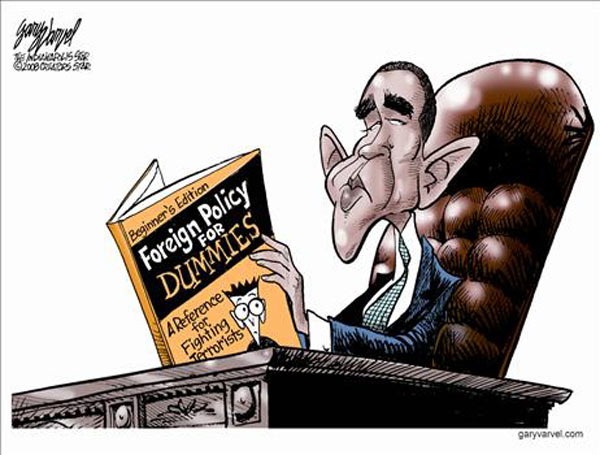 Here is a sampling of some recent news abroad:

A Russian guard attacked a U.S. diplomatic official at the door to the American Embassy in , even as leaders met to galvanize against the next act of Russian aggression.

The Islamic State continued its global terrorist rampage with horrific attacks in and .

rebuffed warnings and defiantly boasted that it will continue testing ballistic missiles. German intelligence believes that , empowered by the release of in impounded cash, is violating its recent American-led nonproliferation deal in an effort to import nuclear bomb-making technology.

conducted a test (unsuccessful, apparently) of a submarine-based guided missile.

There are various ways of interpreting these ominous events.

They could represent just more empty chest-thumping by our enemies.

Or, because this is an election year in the U.S., enemies are posturing in order to advance their agendas, as they often do in times of uncertainty about who will be the next president.

Or, Obama is perceived as an exceptionally lame-duck president who is hoping to wind down his tenure in passivity, without a major incident abroad that might imperil his presidential legacy.

Or, after the explosive rise of ISIS, the disaster in Benghazi, the failed reset with , the unchecked Chinese aggression in the , the concessions in the deal, the veritable implosion of the , and the president's counterproductive sermonizing about Brexit, enemies sense that the U.S. is directionless. These enemies may be unsure whether America still wishes to -- or even can -- exercise its traditional leadership of the free world and remain the custodian of the postwar international order.

But perhaps there is yet another catalyst prompting such events.

appears to be entering another era of dangerous internal instability similar to the one it endured in the 1960s-1970s.

After the attacks by radical Islamists in San Bernardino and , Americans did not rally together as they had after 9/11. Instead, almost immediately, the country was torn further apart. About half the nation saw the terrorist killings as a reason for stricter gun control rather than a reason to fear the continuing spread of radical Islamic terrorism. The other half worried that political correctness and the president's refusal to even mention radical Islamic terrorism are eroding the ability to deter it.

America's enemies draw their own conclusions.

After the attack, al-Qaida urged lone-wolf terrorists in the U.S. to focus exclusively on white targets. The organization's leaders apparently worry that if terrorists again hit minority communities, it will prompt a bickering America to blame itself rather than give full credit to the attackers.

After the recent deaths of two black men in confrontations with police (in and ), followed by national Black Lives Matter protests and the killing of five law-enforcement officers in , it might appear to our enemies abroad that the American superpower is internally unwinding into tribalism in the fashion of the Balkans, or .

As in the case of Islamic terrorism, America seems to have no answers to racial tensions. Half the country believes African-Americans are inordinately targeted by police and that inner-city violence can be attributed to a long history of racism, national neglect and economic stagnation. The other half blame disastrous social-welfare and big-government policies for creating dangerous dependencies and a dearth of jobs in America's inner cities, as well as a popular culture that glorifies rather than discourages the excesses of many young black males.

One America believes that the Obama administration genuinely tried, but so far has failed, to resolve the tensions between inner-city residents and police. The other America thinks Obama sought to leverage those tensions for political reasons.

Either way, most of America privately thinks that Islamic terrorist acts and racial tensions are going to get far worse -- a perception that is probably shared overseas as well.

Our enemies increasingly may gamble that provocations won't elicit a U.S. reaction. Or that even if America did respond, the resulting domestic divisions and turmoil would diminish the effectiveness of the response.

Add to the equation record debt and vast cuts in the defense budget, and our enemies may conclude that we are of AD 500, of the late 1940s, or of the 1980s.

To be blunt, America's vulnerable postwar global order may already seem to those abroad to be bloated carrion ready to be picked apart by opportunistic vultures.