What would have happened if Joe Biden had run? 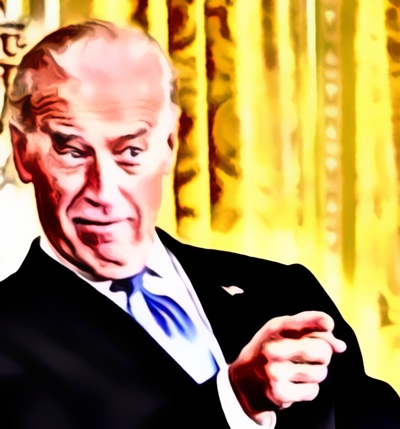 It's the first thought that enters Vice President Joe Biden's head every morning, the moment his bedroom windows at One Observatory Circle grow light from the sun. "What if," Joe Biden thinks.

The race for the Democratic presidential nomination was never supposed to be as close as it ended up. Last spring, Hillary Clinton led her possible opponents by a country mile; by July, 12 months ago, she still led Bernie Sanders by nearly 50 points. But over the summer and into the fall, her lead narrowed, and by the time Biden announced that he wouldn't run in late October, Clinton's lead over Sanders had been as small as 13 points.

Then Biden made his announcement and, as expected, Clinton saw most of the benefit. Why? Because Clinton and Biden shared similar bases of support: Those without college degrees, those earning lower incomes and, most importantly, non-white voters.

Once Biden declined to run, it was fair to assume that was it. For her clear path to the nomination, Biden was now offering Clinton a ride.

But then Sanders kept closing.

As voting began, thanks in part to Clinton's decision not to take the gloves off against Sanders in a number of contests, Sanders caught up. By April, the two were nearly tied nationally. It was too late for Sanders to catch Clinton in delegates, but it showed that there was still a big appetite for a non-Clinton in the contest.

So: What if? What if Biden had stayed in? What if voting in Iowa and New Hampshire kicked off with Biden joining Clinton and Sanders on the ballot?

Fundamentally, this question is impossible to answer. So much changes and evolves over the course of a campaign that it's hard to simply imagine a realistic counterfactual that incorporates every possible scenario. Joe Biden has an unfortunate habit of saying things he's not supposed to say, for example, like when he made condescending and racially loaded comments about Barack Obama early in the 2008 primary cycle. You can't account for things like that.

But if Biden had stayed in and not shot himself in the foot, there would clearly have been a shift to the dynamics -- especially in one important way: Clinton's margins of victory (if not her victory itself) were due to her massive advantage with black voters. That's a voting bloc with which Biden also did well. So: What if?

We can try to answer that question by looking at how polling last fall looked with and without Biden in the race. The Washington Post and ABC News polled in September and October, and we can look at the results of those two polls through two lenses: How support broke down among all three candidates and how it broke down if we reallocate Biden's support to voters' second choices. What's interesting about these two polls is that they reflect two very different moments in the race. The September poll was a particularly bad one for Clinton, putting her at just over 40 percent -- one of her lowest levels of support of the campaign. By October, she'd rebounded somewhat.

In that September poll, Clinton earned the support of 42 percent of the Democrats and Democratic leaners that were surveyed. Take Biden out, though, and her support jumped to 56 percent. Which means that Biden not being in the race gave Clinton a 14-point boost -- and that one-third, 33 percent, of her support in a one-on-one contest with Sanders came from people who would otherwise have backed Biden. For Sanders, the numbers were 24 percent with Biden and 28 percent without -- so 17 percent of his one-on-one support came from Biden.

We can do a similar calculation for all of the demographic groups with large enough sample sizes to be significant. And we can do it for both September and October, to get a sense of how much support Clinton got thanks to possible Biden backers during a bad month and how much she got during a good month.

Let's now assume that those figures didn't change much. One of the things we know is that margins of support from demographic groups remained fairly consistent for Clinton and Sanders even as Sanders gained. As he improved, he improved across the board, but the gap between male and female and between white and non-white didn't change much.

So let's assume that the percentage of support Biden drew from Clinton and Sanders was also somewhat consistent. This is not necessarily a fair assumption, any more than it was fair to assume that Sanders was D.O.A. once Biden dropped out. But it allows us to revamp the field in light of the best data we do have, from September and October.

Exit polling conducted in primary and caucus states gives us a sense of how demographic groups voted over the course of the Democratic nominating process. We can use exit poll figures to approximate the breakdown of delegates won by each candidate, thanks to the Democrats' relatively simply proportional distribution process. There are gaps and flaws in this (including that not every state is included in exit polling), but it at least serves to approximate how the candidates would have done against one another.

How? By taking the support Clinton and Sanders got in exit polling by gender, race and partisanship -- the three categories that overlap well with our poll data -- and taking out those chunks that would otherwise have gone to Biden. So if we're basing this estimate on the figures from the September poll, one-third of Clinton's statewide support would be sliced off and put in the Biden pile, along with 17 percent of Sanders's.

We can do that calculation in each demographic category; that is, how many delegates Clinton, Sanders and Biden would have gotten if the polling for whites and non-whites was our guide, or how many each would have gotten if we used the polling for gender. Then, we can do the calculation using the polling from September and October, giving Biden bigger and smaller slices of Clinton's totals, respectively. Doing so gives us two theoretical outcomes for the Democratic primary (with the actual exit-poll-based results for the sake of comparison).

If Biden had only pulled as much from Clinton and Sanders as he did in October, Clinton would still have won a plurality of the pledged delegates at stake. But if Biden had pulled from the two candidates at the rate he did in September, the contest would would have been much closer.

It's critical to note that the exit poll figures here don't include a number of large states in which exit polls weren't conducted. They don't include Washington, for example, which Sanders won by a wide margin. They also don't include New Jersey, Arizona or California, won by Clinton and which offered a lot of combined delegates. If Clinton and Sanders ended up that close in states with exit polling, once we include Biden, it's hard to know who might have come out on top. It wouldn't have been Biden, if these numbers hold, but it might not have been Clinton.

That's based on September polling, of course. Those September numbers didn't even last until October, so it's unfair to assume they would somehow have stuck around until May. Maybe Biden would have surged past Clinton. Maybe Sanders and Biden would have allied. Maybe Biden would have undercut Sanders' support with young people. None of this is captured in our rough calculation. All we can say is that if Biden pulled from Clinton and Sanders as he did in September and if nothing else had changed, then maybe Clinton wouldn't have won a majority of pledged delegates.

We can put that another way: The answer to the what-if question that no doubt plagues Biden is: Who knows?