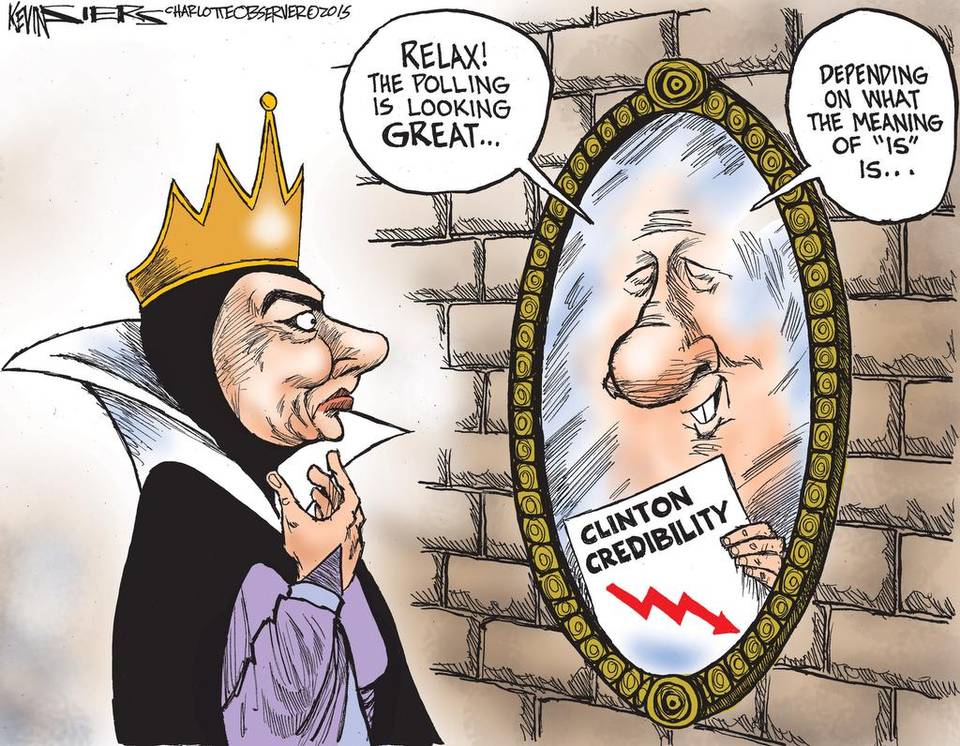 If it weren't for Donald Trump, Hillary Clinton would be the most disliked major-party presidential nominee in recent American history.

That qualifier, of course, is important here. Clinton doesn't need to be liked; she needs to be liked slightly more than Trump in what will very likely boil down to a two-candidate race.

But it's hard to overstate just how bad Clinton's numbers are. And a new Washington Post-ABC News poll is the latest to suggest they just keep getting worse - so much so that they are in some ways about as bad as Trump's.

The poll shows 54 percent of all Americans have an unfavorable view of Clinton and 44 percent have a "strongly unfavorable" view of her. When you boil it down just to registered voters, those numbers tick up to 57 percent and 47 percent, respectively.

Either way you slice it, Clinton's image is as bad or worse than it has ever been. On her "strongly unfavorable" number among all Americans, that 44 percent figure is an all-time high - as is the 47 percent figure among registered voters.

In a campaign between two candidates neither of whom a quarter of Americans say they like, it seems apparent this race will come down to whom they dislike less and whom they trust to be president - despite their personal distaste. But while many Americans will basically have to vote for someone they dislike, there are degrees of dislike. And voting for someone you strongly dislike is a much tougher haul.

This is not the first poll to suggest Clinton is hitting a new low. Recent polls have shown her unfavorable rating as high as 60 percent. Real Clear Politics' average of recent polls shows her unfavorable at 56.2 percent. For Trump, it's at 60.1 percent.

But while Trump has certainly struggled, he seems to have leveled off and maybe even improved a bit in recent months.

Clinton, meanwhile, is trending worse and worse and flirting with Trumpian levels of negative feelings.

There was a time in which Trump was clearly on worse footing with his image than Clinton; back in May, 7 in 10 Americans disliked Trump, while 55 percent disliked Clinton - a 15-point gap. That is no longer clearly the case, with the Post-ABC poll showing just a five point gap among registered voters. And it has to test our assumptions of how much of a favorite Clinton is to become the next president.

Running for president, of course, isn't completely a popularity contest. It helps to be liked, but other things factor in, like a candidate's ability to create change and a candidate's readiness for the job. On the former measure, Trump clearly leads; on the latter, Clinton clearly does.

In fact, the Post-ABC poll shows 58 percent of registered voters say Trump isn't qualified to be president, but just 42 percent say the same of Clinton. A relatively strong majority - 56 percent - says Clinton is qualified. That's a significant gap, and it suggests that if the 2016 election comes down to who appears more presidential, Clinton very likely wins.

But if voters are looking for change and to shake up the system, that's where Trump excels. When it comes to who could bring the "needed change to Washington," Trump leads by 11 points, 50-39. Again, if it's a change election, Trump probably wins, but if voters are more concerned about 3 a.m. phone calls and presidentiality (presidentialness?), it's probably Clinton.

What's clear from the numbers above, though, is that Clinton can't count on a popularity edge. Her email problems - and other problems - have clearly taken a major toll on her image. More than 7 in 10 Americans say Clinton is too willing to bend the rules.

And to the extent elections are popularity contests - which they often have been - that's significant. Then again, we haven't seen an election with two politicians who are so unpopular. So consider this the kind of uncharted territory that should give the Clinton campaign heartburn.