A world in turmoil raises the bar for the party conventions 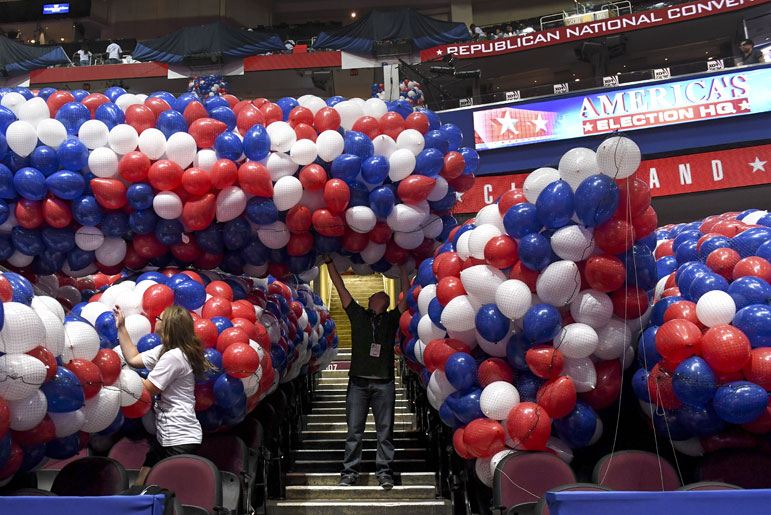 CLEVELAND --- The deadly shootings of police officers in Baton Rouge, Louisiana, on Sunday, coming after the coup attempt and subsequent roundup of plotters in Turkey over the weekend, which followed a devastating attack in the French city of Nice, all have combined to redraw the backdrop for the Republican National Convention, which opens here today.

In normal times, American political conventions command the attention of the world. They are carefully designed infomercials for the two main U.S. political parties and their presidential nominees. But they are only in part reality, and over the next two weeks, they will compete for attention with real and shocking events around the globe.

Television networks could be making split-screen decisions all week about where to focus their coverage and commentary. Judging by the home pages of news websites and newspaper front pages this weekend, it's clear that politicians and their conventions will have no guarantee of prime space.

Because of events, Republicans this week and Democrats a week from now will be judged on far more than whether their conventions are well run and well produced, on whose video bio of the nominee is more compelling or whether the balloon drop works smoothly. Both Donald Trump and Hillary Clinton will be measured by more exacting standards than usual. Can either speak in language strong enough to break through the wall of polarizing rhetoric with which both political parties seem most comfortable?

That bar has now been raised significantly. Normal politics might not be enough for the moment. The question is whether Trump and Clinton can rise to meet it. The real-world backdrop presents both an opportunity and a danger for the candidates. It's questionable whether an electorate already highly dissatisfied with each candidate and the choice in November will judge the same old thing as adequate.

The rewards for success could be significant. Which candidate will be seen as more suited for the demands of the Oval Office in an uncertain time? Which candidate can voters imagine responding effectively to terrorist attacks? Who will be judged as equipped to bridge racial divisions and ease racial tensions? There will be nothing abstract about all these questions. The videos from around the world will be a constant reminder of the stakes of this election.

Republicans had set a relatively low bar for their national convention: a quality acceptance by Trump, preferably one that sticks to the teleprompter; testimonials about the humanity and reliability of their presumptive nominee; some face time for rising stars, at least those who have decided not to skip Cleveland; no real disruption from the anti-Trump delegates; some unexpected glitz and glitter from the showman and his team.

But even with that low bar, Saturday's introduction of Indiana Gov. Mike Pence as Trump's vice presidential running mate should make the entire high command of the Republican Party and those in the rank and file who already had doubts about Trump extremely nervous. It was another demonstration that nothing is predictable about a campaign that is all about - and almost entirely directed by - the candidate.

Saturday's rollout was a mashup of problems, which were well documented in the coverage of the day. The setting in the New York hotel was minimalist. Trump's indifference to his running mate was glaringly obvious. The family tableau on stage at the end was awkward. And Pence's homecoming rally in Indiana seemed an afterthought by a campaign that has shown it knows how to stage big rallies when it wishes to make a splash.

The choice of Pence is popular with the GOP's evangelical base and with many party leaders, who see him as a reliable politician, a true conservative and a loyal soldier. Republican National Committee Chairman Reince Priebus called him "the perfect pick" as vice president on NBC's "Meet the Press" on Sunday.

But if the selection of a vice president is designed to create energy and excitement heading into a convention, Trump's choice and the messy optics surrounding the decision-making and the unveiling have done the opposite. They helped to deflate the mood and dilute the value of what is one of a handful of critical events - the convention is another - over which the candidate has control.

The vice presidential rollout also sent a fresh signal, if all the previous ones had been missed or ignored, that the party is in Trump's hands this week. So the mood in Cleveland on the eve of the convention is guarded rather than festive.

Still, pumping excitement into the Quicken Loans Arena this week should be relatively easy for the convention organizers. The real challenge for Trump as he arrives here is that he has not yet crossed the threshold of acceptability for a majority of the country.

The latest Washington Post-ABC News found that just 39 percent of registered voters nationally judge Trump as qualified to serve as president. Overall, 58 percent say he is not qualified - with 49 percent saying they strongly believe he isn't. Even a quarter of self-identified Republicans say he's not qualified.

He has a cadre of passionate supporters, along with the grudging support from some Republicans who will back him only out of loyalty to the party or because they don't want Clinton as president. But that won't be enough to elect him as president.

There are other judgments the New York business mogul must try to reverse this week. By 2 to 1, Clinton is seen as more temperamentally suited to be president. By about 2 to 1, she is seen as better equipped to handle an international crisis. At the same time, she has only a narrow advantage (four points) on who would be trusted to handle a terrorist attack.

Republicans begin the week with uncertainty about their candidate and with external events adding an element of insecurity to their proceedings. With the country on edge, Trump has the best opportunity of his campaign to reach a wider audience with a broader message. But there is no way to predict how he will respond.