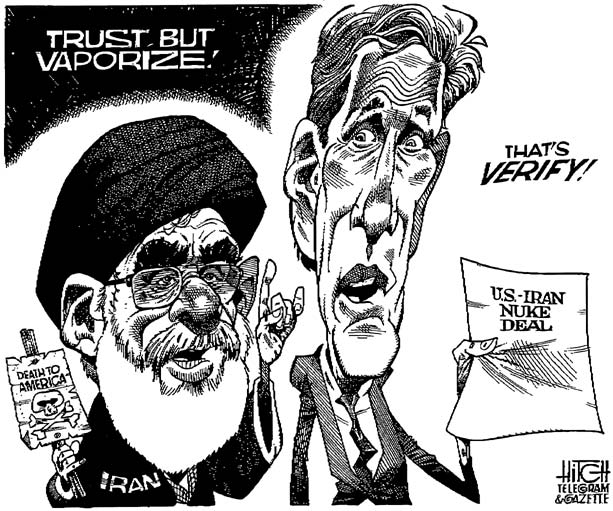 On Tuesday, we moved into a new nuclear age.

In the old nuclear age, the US-led West had a system for preventing the proliferation of nuclear weapons. It had three components: sanctions, deterrence and military force. In recent years we have witnessed the successful deployment of all three.

In the aftermath of the 1991 Gulf War, the UN Security Council imposed a harsh sanctions regime on Iraq. One of its purposes was to prevent Iraq from developing nuclear weapons. After the US-led invasion of Iraq in 2003, we learned that the sanctions had been successful. Saddam largely abandoned his nuclear program due to sanctions pressure.

The US-led invasion of Iraq terrified several rogue regimes in the region. In the two to three years immediately following the invasion, America’s deterrent strength soared to unprecedented heights.


As for military force, the nuclear installation that Syrian dictator Bashar Assad built in Deir a-Zour with Iranian money and North Korean technicians wasn’t destroyed through sanctions or deterrence. According to foreign media reports, in September 2007, Israel concluded that these paths to preventing nuclear proliferation to Syria would be unsuccessful.

So then-prime minister Ehud Olmert ordered the IDF to destroy it. The outbreak of the Syrian civil war three years later has prevented Assad and his Iranian bosses from reinstating the program, to date.

Pakistan and North Korea exploited the post-Cold War weaknesses of its sanctions and deterrence components to develop and proliferate nuclear weapons and technologies.

Due to American weakness, neither paid a serious price for its actions.

Yet, for all its flaws and leaks, the damage caused to the nonproliferation system by American weakness toward Pakistan and North Korea is small potatoes in comparison to the destruction that Tuesday’s deal with Iran has wrought.

That deal doesn’t merely show that the US is unwilling to exact a price from states that illicitly develop nuclear weapons. The US and its allies just concluded a deal that requires them to facilitate Iran’s nuclear efforts.

Not only will the US and its allies remove the sanctions imposed on Iran over the past decade and so start the flow of some $150 billion to the ayatollahs’ treasury. They will help Iran develop advanced centrifuges.

They even committed themselves to protecting Iran’s nuclear facilities from attack and sabotage.

Under the deal, in five years, Iran will have unlimited access to the international conventional arms market. In eight years, Iran will be able to purchase and develop whatever missile systems it desires.

And in 10 years, most of the limitations on its nuclear program will be removed.

Because the deal permits Iran to develop advanced centrifuges, when the agreement ends in 10 years, Iran will be positioned to develop nuclear weapons immediately.

In other words, if Iran abides by the agreement, or isn’t punished for cheating on it, in 10 years, the greatest state sponsor of terrorism in the world will be rich, in possession of a modernized military, a ballistic missile arsenal capable of carrying nuclear warheads to any spot on earth, and the nuclear warheads themselves.

Facing this new nuclear reality, the states of the region, including Jordan, Egypt, Saudi Arabia, Turkey and perhaps the emirates, will likely begin to develop nuclear arsenals. ISIS will likely use the remnants of the Iraqi and Syrian programs to build its own nuclear program.

Right now, chances are small that Congress will torpedo Barack Obama’s deal. Obama and his backers plan to spend huge sums to block Republican efforts to convince 13 Democratic senators and 43 Democratic congressmen to vote against the deal and so achieve the requisite two-thirds majority to cancel American participation in the deal.

Despite the slim chances, opponents of the deal, including Israel, must do everything they can to convince the Democrats to vote against it in September. If Congress votes down the deal, the nuclear chaos Obama unleashed on Tuesday can be more easily reduced by his successor in the White House.

If Congress rejects the deal, then US sanctions against Iran will remain in force. Although most of the money that will flow to Iran as a result of the deal is now frozen due to multilateral sanctions, and so will be transferred to Iran regardless of congressional action, retaining US sanctions will make it easier politically and bureaucratically for Obama’s replacement to take the necessary steps to dismantle the deal.

Just as the money will flow to Iran regardless of Congress’s vote, so Iran’s path to the bomb is paved regardless of what Congress does.

Under one scenario, if Congress rejects the deal, Iran will walk away from it and intensify its nuclear activities in order to become a nuclear threshold state as quickly as possible. Since the deal has destroyed any potential international coalition against Iran’s illegal program, no one will bat a lash.

Obama will be deeply bitter if Congress rejects his “historic achievement.” He can be expected to do as little as possible to enforce the US sanctions regime against his Iranian comrades. Certainly he will take no military action against Iran’s nuclear program.

As a consequence, regardless of congressional action, Iran knows that it has a free hand to develop nuclear weapons at least until the next president is inaugurated on January 20, 2017.

The other possible outcome of a congressional rejection of the deal is that Iran will stay in the deal and the US will be the odd man out.

In a bid to tie the hands of her boss’s successor and render Congress powerless to curb his actions, the day before the deal was concluded, Obama’s UN Ambassador Samantha Power circulated a binding draft resolution to Security Council members that would prohibit member nations from taking action to harm the agreement.

If the resolution passes – and it is impossible to imagine it failing to pass – then Iran can stay in the deal, develop the bomb with international support and the US will be found in breach of a binding UN Security Council resolution.

Given that under all scenarios, Tuesday’s deal ensures that Iran will become a threshold nuclear power, it must be assumed that Iran’s neighbors will now seek their own nuclear options.

Moreover, in light of Obama’s end-run around the Congress, it is clear that regardless of congressional action, the deal has already ruined the 70-year old nonproliferation system that prevented nuclear chaos and war.

After all, now that the US has capitulated to Iran, its avowed foe and the greatest state sponsor of terrorism, who will take future American calls for sanctions against nuclear proliferators seriously? Who will be deterred by American threats that “all options are on the table” when the US has agreed to protect Iran’s nuclear installations and develop advanced centrifuges for the same ayatollahs who daily chant, “Death to America”? For Israel, the destruction of the West’s nonproliferation regime means that from here on out, we will be living in a region buzzing with nuclear activity. Until Tuesday, Israel relied on the West to deter most of its neighbors from developing nuclear weapons. And when the West failed, Israel dealt with the situation by sending in the air force. Now, on the one hand Israel has no West to rely on for sanctions or deterrence, and on the other hand, it has limited or no military options of its own against many of the actors that will now seek to develop nuclear arsenals.

Consider Israel’s situation. How could Israel take action against an Egyptian or Jordanian nuclear reactor, for instance? Both neighboring states are working with Israel to defeat jihadist forces threatening them all. And that cooperation extends to other common threats. Given these close and constructive ties, it’s hard to see how Israel could contemplate attacking them.

But on the other hand, the regimes in Amman and Cairo are under unprecedented threat.

In theory they can be toppled at any moment by jihadist forces, from the Muslim Brotherhood to ISIS. It’s already happened once in Egypt.

As for Turkey, its NATO membership means that if Israel were to attack Turkish nuclear sites, it would run the risk of placing itself at war not only with Turkey, but with NATO.

Given Israel’s limited military options, we will soon find ourselves living under constant nuclear threat. Under these new circumstances, Israel must invest every possible effort in developing and deploying active nuclear defenses.

One key aspect to this is missile defense systems, which Israel is already developing.

But nuclear bombs can be launched in any number of ways.

Old fashioned bombs dropped from airplanes are one option.

Artillery is another. Even suicide trucks are good for the job.

Israel needs to develop the means to defend itself against all of these delivery mechanisms. At the same time, we will need to operate in hostile countries such as Lebanon, Syria and elsewhere to destroy deliveries of nuclear materiel whether transferred by air, sea or land.

Here is the place to mention that Israel still may have the ability to attack Iran’s nuclear sites. If it does, then it should attack them as quickly and effectively as possible.

And no, Israel shouldn’t be overly concerned with how Obama will respond to such actions.

Just as Obama’s nuclear capitulation to Iran has destroyed his influence among our Arab neighbors, so his ability to force Israel to sit on the sidelines as he gives Iran a nuclear arsenal is severely constrained.

How will he punish Israel for defying him? By signing a nuclear deal with Iran that destroys 70 years of US nonproliferation strategy, allows the Iranian regime to grow rich on sanctions relief, become a regional hegemon while expanding its support for terrorism and develop nuclear weapons? Years from now, perhaps historians will point out the irony that Obama, who loudly proclaims his goal of making the world free of nuclear weapons, has ushered in an era of mass nuclear proliferation and chaos.

Israel can ill afford the luxury of pondering irony.

One day the nuclear Furies Obama has unleashed may find their way to New York City.

But their path to America runs through Israel. We need to ready ourselves to destroy them before they cross our border.