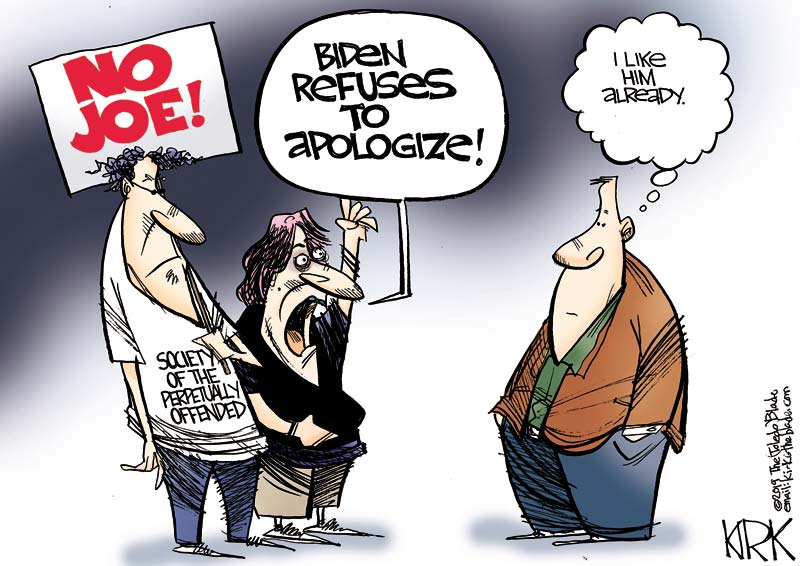 WASHINGTON - Thirty-five percent of presumptive Democratic presidential nominee Joe Biden's campaign operation are people of color and just over half are women, according to figures released Saturday under public prodding, after months in which his campaign declined to make that information public.

At least 60% of the staff is white, a number in line with the percentage of the United States population identifying as such, according to 2019 data from the U.S. Census Bureau. Five percent of the staff opted not to specify a race.

When it comes to senior officials - which the campaign said includes nonstaff "senior consultants who spend the majority of their time on the campaign" - 36% are people of color and 58 percent are women.

Biden's campaign provided the data hours after he was pressed on his campaign's diversity during a virtual presidential town hall hosted by Asian Pacific Islander American Vote. The Washington Post and other news outlets had previously requested information on the campaign's diversity, which it had refused to provide.

The numbers prompted tepid reactions from some Democrats.

"That's not terrible," said Aimee Allison, the founder of She the People, a group that promotes women of color in politics. But she added that it did not fully reflect the party's base.

"I'd love to see a staff that reflects the base," Allison said. She added that the Biden campaign will be "more successful having a set of top advisers who relate to and can connect with the very communities they are dependent on to win."

Also on Saturday, Biden said he has already prepared an immigration bill, and he reiterated his previous vow to send Congress legislation on his first day as president that would create a path to citizenship for undocumented immigrants. Biden and his campaign have drawn criticism from some Hispanic leaders and activists about his record and level of outreach to Latino communities.

"There are things that I had promised before that I'd do on Day 1 that aren't going to go away," Biden said at a virtual fundraiser. "We need to deal with immigration. I already have a bill written. I'm going to send to the United States Congress on Day 1 a path to citizenship for those in fact who are undocumented."

The makeup of Biden's team has come under intensifying scrutiny as questions of race have dominated the national political conversation, with protests against racism and police violence against African Americans erupting across the country. Some supporters have indicated concerns about the diversity of his team, whose most visible leaders are white.

Biden recently added more people of color to his team, which, along with the inclusion of consultants in its newly released figures, appeared to have increased his percentage of nonwhite staff members. Consultants are not traditionally considered staff on campaigns.

Senior staff means "senior leaders who meet regularly to make decisions. People with authority," the campaign said in a statement.

The Republican and Democratic coalitions differ in their racial makeup. A majority (53 percent) of white, non-Hispanic voters identify with the Republican Party or lean Republican, according to data from the Pew Research Center. Four in 10 Democratic registered voters are now nonwhite, compared with just 17 percent of the GOP, the data show.

When it comes to staffing, the Biden campaign is working with a group called Inclusv, which seeks to ensure that staff of color can be found at all levels of politics. Alida Garcia, the founder of Inclusv, said it plans to promote job opportunities to its members. The figures released Saturday amounted to a "great first step," she said, but they "indicate there is a lot of room for growth."

The names of Biden's staff members were not included in the information released Saturday. Symone Sanders, a campaign senior adviser, is his most visible African American aide. Biden also has a large crew of surrogates of color, but they are not campaign staff members. The figures released by the campaign did not distinguish race beyond whether the officials were white or of color.

The campaign said its definition of senior staff "includes department heads, senior advisers, deputy campaign managers, and senior consultants who spend the majority of their time on the campaign, and others." It added in a statement that it is "still continuing the hiring process and expects to continue to add key leaders across the campaign."


Hours before the release, PBS correspondent Amna Nawaz noted to Biden in the town hall that his campaign had not yet released specific information about the diversity of his staff.

"When will you release that staff diversity data?" she asked.

Biden replied: "I'll release that staff diversity data today. When we get off this call, we'll call you."

Nawaz followed up by asking whether Biden was talking about "the senior-most members of your staff, not staff overall - the people with agency who are at the decision-making table. Is that correct?"

Nawaz said she would take Biden up on his offer.

"My team has to be watching this. When this is over, pick up the phone immediately and call her, OK?" Biden added.

"Look at my staff. I have the most diverse staff of anybody running. I've always done that," Biden told NPR in December. "The administration should look like the American public."