One wrong 'like' will get you canceled by cancel culture 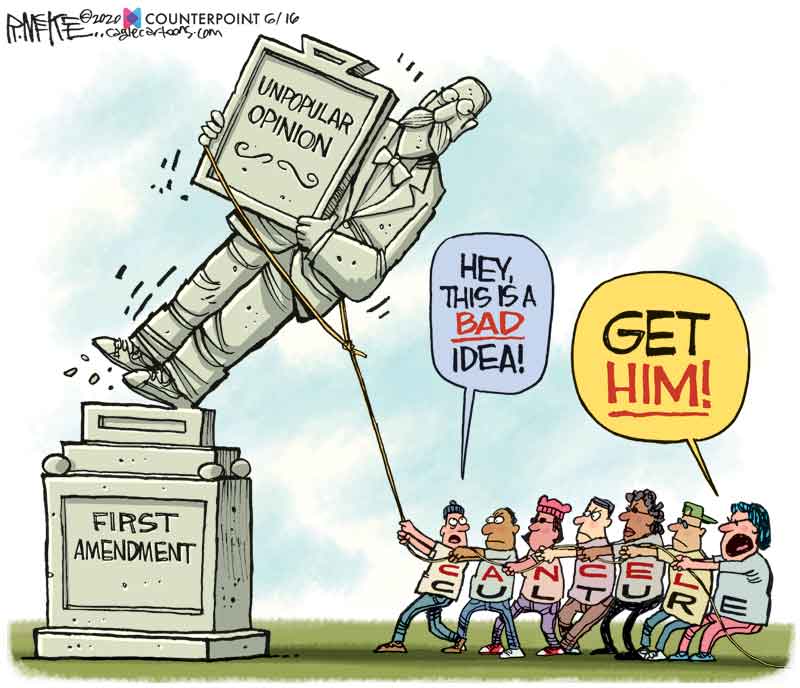 The Thought Police of the American left now rule what's called the "cancel culture." You know this.

Ask yourself: What is it doing to the young? Some will go through life kneeling. And others may be driven deeper into the arms of the hard far right.

What kind of country are we building here?

"Cancel culture" is a force of Democratic politics now, just as Joe McCarthy, a thoroughly evil man, used his political witch hunts to become a force of Republican politics years ago.

Now Democrats hope to use it to win power. If you disagree, show me Democratic politicians who dare condemn this cultural terror?

Who wants to be the witch?


Just say the wrong thing. Merely like the wrong tweet — say, of someone criticizing Black Lives Matter — and you may lose your career.

Your employer will be pressured to fire you. You will be shunned as were liberals of the 1950s, terrorized that they would be marginalized as communists.

It's the same dynamic, only now with Twitter, Facebook and other social media platforms, which skew left. If that's not terror, then what is?

"I've been writing about cancel culture for a while," New York Post columnist Karol Markowicz told me Thursday as we recorded "The Chicago Way" podcast that I co-host with WGN producer Jeff Carlin.

"Now, they're coming for the audiences," she said. "What we're seeing now is (targeting) not just opinion makers. But opinion consumers."

I recommend that you read her column titled "The â€˜cancel' crew will come for you someday soon."

In the recent past, "cancel culture" was used by the left on liberals who strayed too far to the center. The new thought police would also attack prominent conservatives, but most of those had support from conservative magazines and other platforms and just kept writing and talking.

And what of those who don't have such support? And what of young people, who may have to suppress the urge to like a conservative take on Twitter?

"I really do think it leads to more conspiracy theories and more extreme opinions (among the young)," she said. "Because if you're told that mainstream conservative opinion is not OK, you might seek out even more extreme, more unacceptable opinions."

Markowicz mentioned that just the other day, Michael Korenberg, the chairman of the University of British Columbia's board of governors, was forced to resign. I don't know his Canadian politics. But I do know his thought crime.

He was accused of having liked tweets by Dinesh D'Souza, the conservative who dares mock Black Lives Matter, and other tweets praising President Donald Trump and condemning the violent antifa movement.

All Korenberg did was like them. He was denounced. He groveled. Then he was gone.

Just imagine if you were canceled for liking tweets by columnists who loathe Trump and who praise Black Lives Matter and appreciate antifa.

Can you imagine being canceled (i.e., fired and humiliated) for that?

No? Neither can I.

My friend Charlie Lipson, the political scientist and writer, also has a great piece on cancel culture at RealClearPolitics.com. It is titled "Defund the Thought Police."

As a longtime professor at the University of Chicago, Lipson has a special fondness for the free and open exchange of ideas. But that's ancient history.

"The idea of an open forum, so basic to democracies, already lies a-moldering in the grave of academia, at least in the humanities and social sciences. Imagine applying for a job in Gender Studies and saying you oppose abortions after, say, Week 38. The term for such a person is â€˜unemployed.' Imagine merely calling for a discussion on the pros and cons of affirmative action, taking the negative side, and hoping to win tenure in political science, sociology, anthropology, or history. Bad career move. There is more robust political debate at the Academy Awards."

"â€¦ Yet all of the (universities) proudly tout, with no sense of irony, their â€˜office of diversity and inclusion,' fully staffed and generously funded. For them, of course, diversity never includes diverse viewpoints. It's all about DNA and gender identity. Modern universities are now well-oiled machines to stamp out dissenting views."

The new wrinkle is that cancel culture has spread, like a virus, out from the universities and into elementary schools, mainline churches, corporate HR departments.

It has spread to newsrooms, as The New York Times proved when it disgraced itself recently, by firing its editorial page editor for the sin of daring to run commentary from U.S. Sen. Tom Cotton.

"The thought police," Lipson writes, "are on patrol and ever-vigilant, twirling the twin batons of guilt and moral superiority."

Will the cancel culture come for me? I suppose so.

But as a boy, I never thought the Thought Police would come from the left.

I was taught the terror would come from the right. The McCarthy hearings were still in the public mind. We didn't call it "cancel culture" then, but "cancel culture" movies were popular, like "Fahrenheit 451," directed by Francois Truffaut, from the novel by Ray Bradbury.

My older cousins, liberal teachers and artists — whom I love and love me — wanted me to read the novel first.

It was horrifying. The firemen were the ones who burned the books.

I was about 12 years old when I read it. I couldn't think of a world more frightening than one without books, thoughts, the freedom to speak your mind.