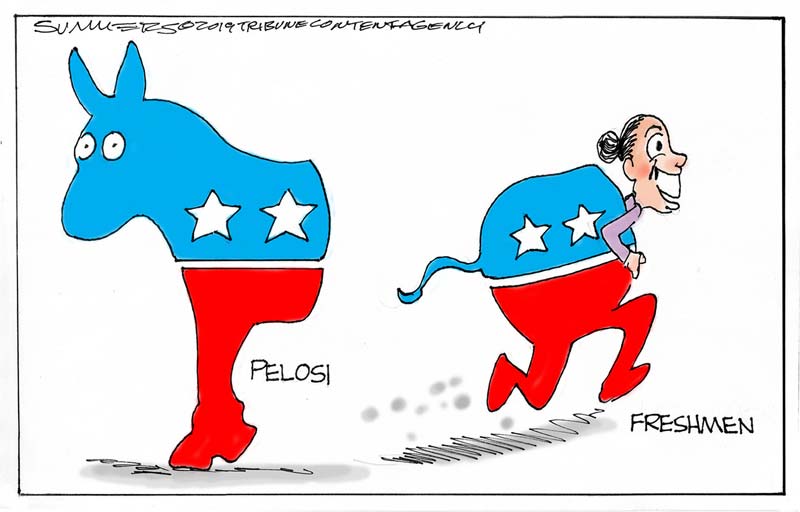 Even though she's not running, Speaker Nancy Pelosi, D-Calif., is the Democrat with the most authority to shape the 2020 presidential debate. And she's on a mission to keep her party from veering further left than it already has.

She is putting up guardrails for the party on issues including impeachment (not going to happen under her watch), health care (she's not a fan of Medicare-for-all) and climate change (nor is she a champion of the Green New Deal).

As leader of the House of Representatives, she has quite a bit of sway. She is the top elected Democrat in Washington. And she decides what bills her chamber votes on. The lawmakers in the House and Senate running for president - 11 in all - just get to vote.

So it's notable that under her leadership, the House hasn't voted on any big-government policy package championed by the Bernie Sanderses and Elizabeth Warrens of the world.

In May, the House voted on seven health-care bills designed to bandage Obamacare now that the Trump administration is trying to kill it by a thousand cuts. Not a single one of those bills would establish universal health care, even though Medicare-for-all is a defining policy debate of the 2020 presidential primary. Five of the seven senators running for president support a Medicare-for-all bill.

She also hasn't allowed a vote on the Green New Deal, a plan to tackle climate change with Roosevelt-era-style government-funded jobs, despite the fact that many 2020 candidates support some aspect of the plan. And she's held off her party from taking the first steps to impeach President Donald Trump even though 67 House Democrats - and a number of presidential candidates - want to.

Pelosi's logic is simple. She's not thinking about the Democratic primary.

She believes that the battle for her House and the White House in November 2020 will be waged in communities that voted for President Trump in 2016 such as Rep. Elissa Slotkin's Lansing, Michigan, district or in Georgia where Rep. Lucy McBath got narrowly elected last year or in Iowa, where Rep. Abby Finkenauer is campaigning to stay elected after knocking off a Republican member of Congress. All three represent districts that voted for Trump in 2016 in states Trump won. None of them support impeachment of Trump.

Meanwhile, Sanders, one of the leaders in polling in the 2020 race, just gave a speech on why his particular brand of socialism is exactly what the party needs to win.

Pelosi has said that that kind of talk is a net negative for her party. So she is not going to give universal health care or impeachment or other big-government actions that Republicans can use to slander Democrats as "socialists" any more legs by allowing her chamber to consider such issues.

Polling on public opinion backs her up on much of this. A new Wall Street Journal/NBC News poll finds 48 percent of Democrats believe that there's enough evidence to support impeachment proceedings, but that survey and other polls still find that about half of Americans oppose it.

Half of Americans say they would support paying more in taxes to assure that all Americans have health care, according to a WSJ/NBC News poll. But getting rid of private insurance, which Medicare-for-all would do, is much less popular.

And less than half of Americans say they are intensely concerned about climate change, a March Gallup survey finds, even as it ranks among the top issues for Democrats.

Americans are wary of the federal government, writes Frank Newport, a senior polling scientist for Gallup. He points to recent Gallup polling that shows 62 percent of Americans "want the free market, rather than the government, to be primarily responsible for 'the economy overall' and 'wages.' "

That's not to say Pelosi is the only Democrat in the House having an impact on the 2020 presidential primary. Rep. Alexandria Ocasio-Cortez (N.Y.) is the House's author of the Green New Deal. She rapped former Vice President Joe Biden for being "middle of the road" on climate change. Soon after, his campaign rushed out a plan that advocates say mirrors her Green New Deal. (It was so rushed that some phrases were lifted directly from advocacy groups.)

But as the presidential contest pushes all the candidates to the left, Pelosi is gripping the wheel to try to keep her party focused on the center. While Democrats spend the next year deciding who they want to be their leader, Pelosi is the de facto one.