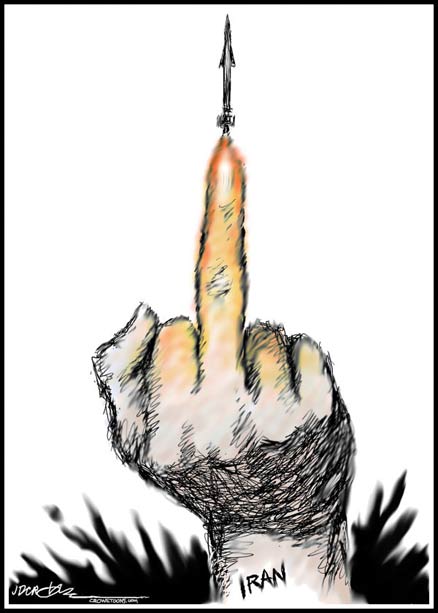 As President Donald Trump mulls a comprehensive response to what he says was an Iranian attack on oil tankers in the Persian Gulf last week, his smarter critics are not questioning Iran's likely culpability. Instead, they are asking, "What did you expect?"

So Rep. Adam Schiff, the Democratic chairman of the House Intelligence Committee, agreed that evidence of Iran's responsibility for the attacks is "very strong and compelling." But he also lamented that Trump had isolated the U.S. from its allies, and how those allies and U.S. intelligence analysts warned "that this kind of Iranian reaction was likely - a result of a policy of withdrawing from the Iran nuclear agreement."

Schiff is right about those warnings. He is wrong, though, if he means to suggest that the U.S. is somehow responsible for Iran's latest predation, a point made by other Trump critics. This kind of analysis is leading to some bizarre policy recommendations. Already, European diplomats are urging Trump to drop his campaign of maximum pressure and adopt one of "maximum restraint."

This is asking to be blackmailed. And now that Iran is threatening to exceed the limits to uranium enrichment it agreed to in the 2015 nuclear deal, it's more important than ever to understand that restraint and dialogue will not bring Iran to heel.

Start with an obvious point: Whether it was helping overthrow the government in Yemen or saving Syria's dictator as he gassed his own people, Iran was destabilizing the Middle East even as it negotiated with the West over its nuclear program starting in 2013. That's one reason why Trump is now trying a maximum pressure approach - to get Iran to end its own adventures in the Middle East.

Another aspect of the critique of Trump's policy is a fear that U.S. brinkmanship with Iran will lead to a repeat of the Iraq War that started in 2003. Pete Buttitgieg, the Democratic candidate for president, shared this concern in an interview. He pointed to the presence of John Bolton as Trump's national security adviser as a reason to be alarmed.

This is not the way to look at it. To start, Trump and his top advisers are not planning a large-scale invasion and reconstruction of Iran as George W. Bush's administration did with Iraq in the aftermath of Sept. 11. The Pentagon announced Monday that it is sending only 1,000 troops and made clear they are "for defensive purposes." Administration officials tell me that a limited strike on Iranian naval facilities is being considered, along with less kinetic options, such as military escorts for some tankers.


A quarter-century ago, this kind of military action was known as "cruise missile diplomacy." There was a lot of criticism of President Bill Clinton's decision to strike targets in Sudan and Afghanistan in response to al Qaeda's bombing of two U.S. embassies in Africa. But there was no credible argument then that the attacks were a pretext for a U.S. invasion, and there isn't one now that limited strikes against Iranian naval facilities will lead to a ground war.

More important, the public fretting about launching a war with Iran ignores the fact that Iran has waged its own war against the U.S. and its allies for decades. It has supplied insurgents in Iraq and Afghanistan with the roadside bombs that maimed and killed U.S. soldiers. It tried to assassinate the Saudi ambassador in Washington. More recently, Iran's diplomats and operatives were tied to terror plots in Western Europe.

Iran's bellicosity began long before Trump's maximum pressure campaign. It has been a feature of Iranian statecraft since the 1979 revolution. If allies in Europe and Democrats in Congress are worried about war with Iran, they should start by holding the regime accountable for its actions, instead of blaming them on an administration trying to deter them.