US holds all the cards in showdown with Iran 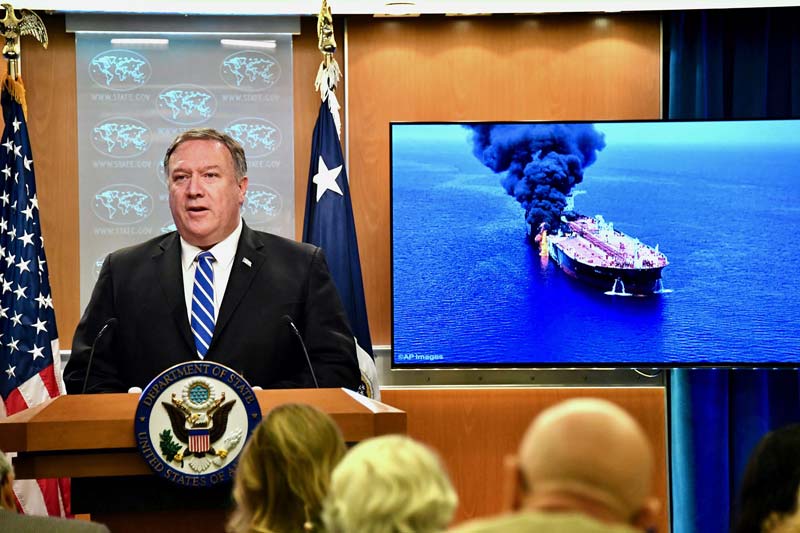 In , the Donald Trump administration withdrew from the Joint Comprehensive Plan of Action with , popularly known as the nuclear deal.

The then ramped up sanctions on the Iranian theocracy to try to ensure that it stopped nuclear enrichment. The Trump administration also hoped a strapped would become less capable of funding terrorist operations in the and beyond, proxy wars in the Persian Gulf, and the opportune harassment of ships transiting the .

A desperate Iranian government is using surrogates to send missiles into while its forces attack ships in the Gulf of .

The Iranian theocrats despise the Trump administration. They yearn for the good old days of the Obama administration, when the agreed to a nuclear deal that all but guaranteed future Iranian nuclear proliferation, ignored Iranian terrorism and sent hundreds of millions of dollars in shakedown payments to the Iranian regime.

believed that the Obama administration saw it as a valuable Shiite counterweight to and the traditionally American-allied Sunni monarchies in the Gulf region. assumes that an even more left-wing American administration would also endorse -friendly policies, and so it is fishing for ways to see that happen in 2020 with a , or presidency.

Desperate Iranian officials have already met secretly with former Secretary of State and openly with Sen. , likely to commiserate over Trump's cancellation of the nuclear deal and to find ways to revive the Obama-era agreement after Trump leaves office.

To that end, the Iranians wish to disrupt world oil traffic while persuading , and the to pressure the to back off sanctions.

hopes to provoke and embarrass its nemesis into overreacting -- or not reacting at all. If Trump does nothing, he looks weak to this Jacksonian base of supporters. But do too much, and he appears a neoconservative, globalist nation-builder. Either way, the Iranians think Trump loses.

After all, knows that Trump got elected by flipping the blue-wall states of the Midwest -- in part by promising an end to optional interventions in the . Accordingly, hopes to embarrass or bog down the before the 2020 elections. In view, the challenge is to provoke Trump into a shooting war that it can survive and that will prove unpopular in , thus losing him the election.

, of course, is not always a rationale actor. A haughty always magnifies its own importance and discounts the real dangers that it is courting. It harkens back to its role in the 2003-2011 Iraq War, a conflict that proved that efforts could be subverted, hundreds of American soldiers could be killed, public support for war could be eroded, and a more malleable American government could be transitioned in.

But what worked then may not work now. The is not only the world's largest producer of oil and natural gas, but soon to become the largest exporter of energy -- and without getting near the Iranian coast. Likewise, American allies in the such as are energy independent. America's Arab friends enjoy seeing competing Iranian oil all but off the market.

Time, then, is on the Americans' side. But it is certainly not on the side of a bankrupt and impoverished that either must escalate or face ruin.

If starts sinking ships or attacking assets, Trump can simply replay the strategy of selective off-and-on bombing. The did not lose a single pilot to enemy action.

Translated, that would mean disproportionately replying to each Iranian attack on a asset with a far more punishing air response against an Iranian base or port. The key would be to avoid the use of ground troops and yet not unleash a full-fledged air war. Rather, the would demonstrate to the world that Iranian aggression determines the degree to which suffers blows from the

Of course, may try to stir up trouble with through its Syrian and Palestinian surrogates. may in extremis also stage terrorist attacks in and the And it may lie that it has already developed enough fissionable material to launch a nuclear missile.

But the truth is that America has all the cards and none in its game of chicken.

Because is losing friends and money, it will have to escalate. But the can respond without looking weak and without going to war -- and without ensuring the return to power of the political party responsible for giving us the disastrous nuclear deal that had so empowered in the first place.