Already fighting for their political lives, the 3 Dems who backed Gorsuch are caught between the lurching left and GOPers calling for them to stand with Trump 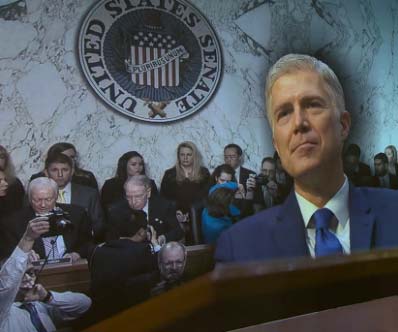 WASHINGTON - Three centrist Democrats fighting for their political lives faced growing pressure from liberal activists and some of their own Senate colleagues Thursday to oppose President Donald Trump's choice for the Supreme Court.

Sens. Heidi Heitkamp of North Dakota, Joe Manchin III of West Virginia and Joe Donnelly of Indiana already were navigating tough politics five months before the midterms, seeking reelection in states Trump won by hefty double digits in 2016. Each is critical to Democratic chances of wresting control of the Senate in November.

The three broke party ranks last year and voted to approve Neil Gorsuch. Now, with Justice Anthony Kennedy's retirement, they are caught between liberals demanding that Democrats unite in opposition to Trump's next lifetime appointment to the court and conservatives insisting they stand with the president.

All three met with Trump Thursday evening to discuss the court vacancy, according to White House press secretary Sarah Huckabee Sanders, as did three Republican senators.

In front of the Supreme Court on Thursday, left-leaning activists and four potential Democratic presidential candidates staged a rally under the blazing late-morning sun urging the party to oppose the 25 people from which Trump has said he would choose a nominee.

"The battle lines have been drawn," Gillibrand said , shouting at the top of her lungs at the rally. "Which side are you on?"

The extraordinary scene underscored the divide in the Democratic Party, pitting the centrists facing reelection this year against the possible 2020 hopefuls. Liberals fear Trump's pick would solidify the conservative court for generations, overturning decisions on abortion rights, gay rights, health care and the environment.

"Joe Donnelly, Heidi Heitkamp, Joe Manchin, we know you stood with us in fighting back the repeal of health care. We need you to stand with us now," said Brian Fallon, the executive director of Demand Justice.

The three senators' excruciating dilemma underscores how Kennedy's decision to retire has scrambled the midterm landscape in favor of Senate Republicans. The GOP has charted a path to keeping its narrow Senate majority through Trump-friendly states represented by Democrats.

Facing pressure from the right, the Judicial Crisis Network, a conservative group, announced a seven-figure ad campaign urging the centrist Democrats to support Trump's nominee. The ads told voters to call their senators and ask them to help Trump install another justice. They are airing in North Dakota, West Virginia and Indiana, among other states.

"They all will have the decision of voting for someone I can be confident will be a highly qualified, experienced and talented nominee like Justice Gorsuch or . . . aligning themselves with the fringe of their party rather than the bulk of the states they represent," said Carrie Severino, chief counsel and policy director at the Judicial Crisis Network.

Manchin, Heitkamp and Donnelly have avoided taking sides before Trump announces his nominee, but have signaled they would be open to voting for the pick.

"I just think you have to go through a process," Manchin said Thursday. "I want qualification - somebody that's well qualified, understands the Constitution and rule of law. That's it."

In a statement issued after the meeting with Trump Thursday, Donnelly said that when the president makes his choice for the Supreme Court, "I will thoroughly review the record and qualifications of that nominee."

Heitkamp sounded bipartisan notes in a statement, saying Trump has an "opportunity to choose a nominee who reflects the same qualities embodied by Justice Kennedy of being fair, pragmatic, and empathetic to all who appear before the court - and who could gain support from senators on both sides of the aisle."

All three have run reelection campaigns designed to appeal to Democrats and Republicans. Heitkamp, for example, recently unveiled an ad highlighting praise she has received from the GOP. All have studiously avoided wading into the polarizing culture wars that tend to send voters running back to their partisan camps.

But that may no longer be possible now that abortion rights and other hot-button issues have been thrust to the forefront of the national conversation. At the rally in front of the Supreme Court, activists highlighted the protections they feel are at risk if the court replaces Kennedy - a longtime swing vote - with a conservative. They scrawled them in bright colors on pieces of paper and taped them to the sidewalk.

"Marriage," "My body my choice," "Mass incarcerations," some read. The leader of the Senate Democrats has made similar arguments.

"The president and his hard-right ideological judicial acolytes are way far away from where the American people are, and are trying to create a court to turn the clock backwards in so many ways, with Roe at the top of the list," Senate Minority Leader Charles Schumer, D-N.Y., said in a speech on the Senate floor on Thursday.


As a candidate, Trump promised to try to overturn Roe v. Wade, the 1973 decision that legalized abortion nationwide.

Fallon, a former Schumer aide, said his group is likely to run advertisements applying pressure on the centrist Democrats to resist the temptation to back Trump's nominee. One issue they plan to single out is health care, which red-state Democrats discuss frequently in the campaign.

"We know that these senators are perfectly comfortable campaigning on ACA," Fallon said in an interview, referring to the Affordable Care Act. Republicans have opposed the law, which has survived legal challenges.

He said that if Trump's nominee will not clearly state respect for prior rulings upholding the law, "Our argument would be, that should be an adequate basis to treat the vote on Trump's nominee as a vote to uphold A.C.A."

There is nothing Democrats can do on their own to prevent Republicans confirming the next justice, which Senate Majority Leader Mitch McConnell, R-Ky., has said will happen this fall. Even if all 49 Democratic senators voted no, they would still need one Republican to join them - two if Sen. John McCain, R-Ariz., returns from a lengthy absence. That will not be easy.

Nevertheless, there is a greater urgency in the party than ever to do everything possible to make it more difficult for Trump and his party to muscle through a nominee they don't like.

"This this a different vote on the court than the Gorsuch vote," said Sen. Chris Murphy, D-Conn. "The consequences of this vote are fundamentally different, and so I hope that everyone here will look at this decision differently."