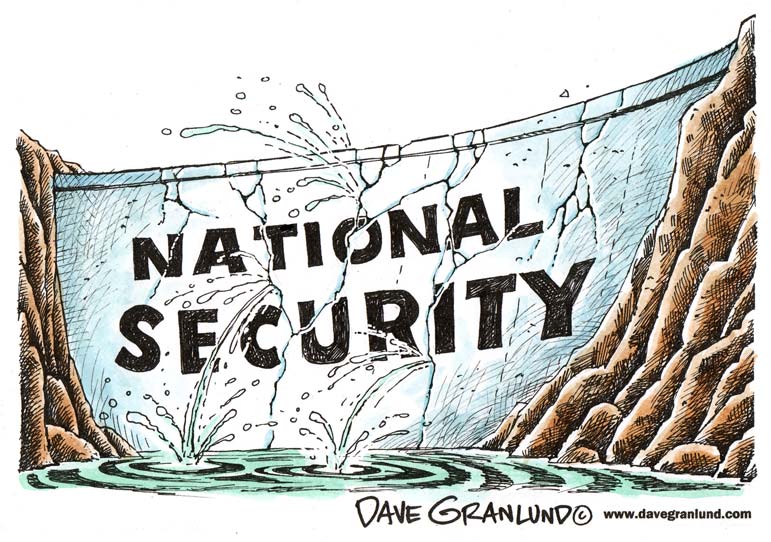 In modern Washington, leaking is a bit like gambling at Casablanca. Everybody does it, but you never know when inspector Captain Renault is going to shut you down.

To understand this insight, I recommend reading Page 458 of the new Inspector General Report on the FBI's 2015-2016 investigation of Hillary Clinton's use of a private email server. It says: "We have profound concerns about the volume and extent of unauthorized media contacts by FBI personnel that we have uncovered during our review."

It goes on to say that FBI agents were enticed to spill the goods from reporters who plied them with meals, invitations to parties, tickets to sporting events and golf outings.

Indeed, the fear that details about the Clinton investigation would leak to the press were so prevalent among the FBI's senior leaders that they advised former FBI director James Comey to inform Congress and the public that he was reopening the investigation into Clinton's email server, not two weeks before election day in 2016.

"We do not believe the problem is with the FBI's policy, which we found to be clear and unambiguous," the report says. "Rather, we concluded that these leaks highlight the need to change what appears to be a cultural attitude."

For the most part I encourage leaking. It keeps us journalists in business. And all kidding aside, it's a crucial check on the government. Without leaks, the public would be informed essentially by press releases. Americans would know no more than their government wanted them to know.

That said, the confirmation that the FBI leaks just like the rest of the U.S. government is important because in this scenario the bureau is the Captain Renault. It's the FBI and the Justice Department that choose what unauthorized disclosures of classified information to investigate. This concern was a major factor in the FBI's probe of Clinton's private email server: the prospect that classified information transited through these servers that were vulnerable to hacks from foreign governments.


And here is where Inspector General Michael Horowitz has provided Washington with a marvelous irony. His investigation found that senior FBI officials, including Comey himself, also used private emails to conduct official business.

In Comey's case, Horowitz didn't find that Comey discussed classified material on his personal email account. But Agent Peter Strzok did. Horowitz found that on Oct. 29, 2016, Strzok forwarded from his work account to his personal account an email about the proposed search warrant for the laptop of former congressman Anthony Weiner. Horowitz notes the warrant at the time appeared to be under seal from a federal court.

Sztrok was a senior agent on the FBI's investigation into Clinton's emails as well as the bureau's investigation into Russia's efforts to influence the election. He became a public figure in December when the Justice Department released private and political texts between him and former FBI lawyer Lisa Page.

It should be said here that the inspector general was critical of Comey's insubordination and the manner in which he decided to depart from Justice Department norms to inform the public of the FBI's decision not to seek a prosecution of Clinton. The report is also highly critical of Strzok and Page for using FBI phones and devices to share their negative views on Trump. The FBI is now reviewing whether to take further action against Strzok, even though it did not find evidence that his political bias (or for that matter Comey's) influenced the Russia or Clinton investigations.

But the big story here is really all about the FBI's culture of leaking. This is the bureau that is supposed to investigate leaks; it can destroy powerful Washington figures like General David Petraeus, who pleaded guilty to lying to the FBI about giving his mistress and biographer his personal notebooks that contained code-word sensitive information about his time as commander in Afghanistan.

Petraeus managed to avoid jail time. But lower-level leakers have not been so lucky.

John Kiriakou served 30 months in prison for disclosing the identity of a CIA officer who helped capture al Qaeda operative Abu Zubaydah. Former NSA official Thomas Drake, who was charged with felony leaks, was ruined by the allegation even though the charges against him were dropped in 2011.

Until recently the FBI itself was largely immune to the kinds of leak probes it conducts on everyone else in Washington. That appears to be changing. Earlier this year, the inspector general released a scathing report on former deputy FBI director Andrew McCabe. It accused him of lacking candor when asked about unauthorized disclosures to the media. Horowitz notes in his report this week that Comey himself urged the inspector general to look into leaks as well. That investigation is still ongoing.

There is a danger to this zero-tolerance approach. The problem is not that there are too many leaks. Rather there are too many state secrets. The FBI cannot be expected to protect all of them. Better to narrow in on the kinds of state secrets really worth protecting, like the identities of Americans under court-ordered surveillance.

Unfortunately, the Justice Department has decided to expand on the Obama administration's overzealous approach to leak investigations, ensnaring journalists and bragging over the apprehension of even low-level leakers.

There's some good news, though. We most likely won't have to wait for indictments to find out who's been leaking. The FBI, after all, has plenty of friends in the media.