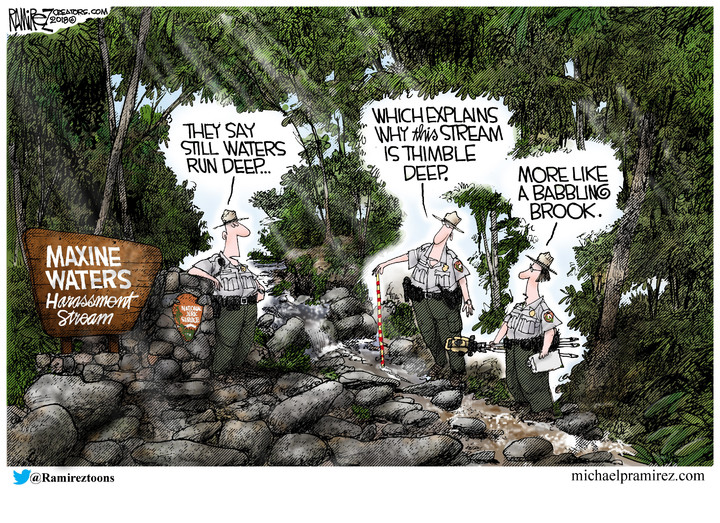 Just what will the rage-filled American political left and their Democratic Party handmaidens do when they take power?

Given their recent calls to mob action, harassing and their families out of restaurants and movie theaters, spittle flying from angry mouths, America is right to wonder what will happen when the left holds the federal hammer in its hands.

The end of is a dream they chase, just as they chased press secretary and her family from the Red Hen restaurant in , a few days ago.

But just about the last thing any American wants to dream about is the rat cage strapped to your face before a thorough confession of political sins. Then come the other rituals, from the shaving of heads to the public walks of atonement, with cackling and shrieking in the background.

Oh, pardon me. I'm sorry. Did I just type "rat cage"? What was I thinking?

With all the easy references in media to "Nazis" these days, a dehumanizing term applied to Americans who dare believe their country should have secure borders, I thought perhaps a small mention of "rat cage" might be acceptable, too.

I apologize. My hyperbole is wantonly irresponsible. And what makes my sin worse is that now we're being told by the voices of reason to take a step back and remember a time of gentle civility in America, before Trump and his brutish, vulgar ways.

So, let's remember those civilized times, shall we?

It seems almost quaint to remember kicking more than 60 million people to the margins of American culture. She sentenced them to eternal limbo in her "basket of deplorables." Remember?

is a practical town. A crooked, violent town, yes, and broke, but practical in some things. Wise Democrats could see the chaos Clinton unleashed with her "deplorables" remark.

But by then it was too late. America heard her words. And more than 60 million of them voted for Trump.

It wasn't the only reason she lost the election. It wasn't the Russians. Clinton was the dowager empress of a discredited establishment, 2016 was the year of insurgency, and her "deplorables" comment became a rallying cry.

Shaming is a goad. It keeps people in line, lest they stray and are devoured on social media as a lesson to others.

Americans aren't big on shaming. They don't like it when it comes from the Twitter feed of some anonymous troll with a cartoon head.

They like shaming even less when they envision themselves as the next , up close, their families surrounded, the screamers in their faces, flecks of spittle flying. What comes after shaming? Pain.

But the left loves to publicly shame those who challenge them. The left's attacks on conservative speakers at college campuses was but a precursor to what's happening now.

Americans don't mind debate. What they do mind is picturing themselves ordering a chicken dinner and being told to leave because of their politics, as happened to Sanders.

Or shouted at in a restaurant, and outside her home, as is happening to Kirstjen Nielsen, the secretary of homeland security.

Or being yelled at and allegedly spat on as was Attorney General at a theater where she hoped to watch the documentary on the gentle .

Won't you be my neighbor?

Waters, the Democrat considered a hero and wise woman to some, argued publicly that those loyal to should be hounded, publicly.

"And if you see anybody from that in a restaurant, in a department store, at a gasoline station, you get out and you create a crowd," Waters said at a rally the other day. "And you push back on them."

This is exceedingly dangerous. It begs violence. And if it happens, it will rightly be put in the lap of the .

Because Waters is a Democrat, and what she calls for is mob action and vengeance. The mob lunges forward, filled with self-righteousness, and seeks a dehumanized enemy.

What adds to the danger is that Trump voters have already been dehumanized as "deplorables" and most recently and loudly as Nazis by many in media and the left, for daring to think America should have control over its borders.

Trump wouldn't know civility if it bit him. He's not an example of prudence and good manners. And he's no .

What he's doing is making Waters the public face of his opposition. He won't let it go. Her idiocy has great currency.

Some , like Senate Minority Leader of , properly admonished Waters. But unless censure her publicly in the House (and they wouldn't dare), they'll sidestep this and search for some new outrage to change the subject.

They are such expert dancers in , as they must have been in their past lives, in the glittering French palace of Versailles, knowing just when to point the toe, and when to put their best foot forward, while stepping off to the side.