Trump and Dems both weaponize children in immigration fight 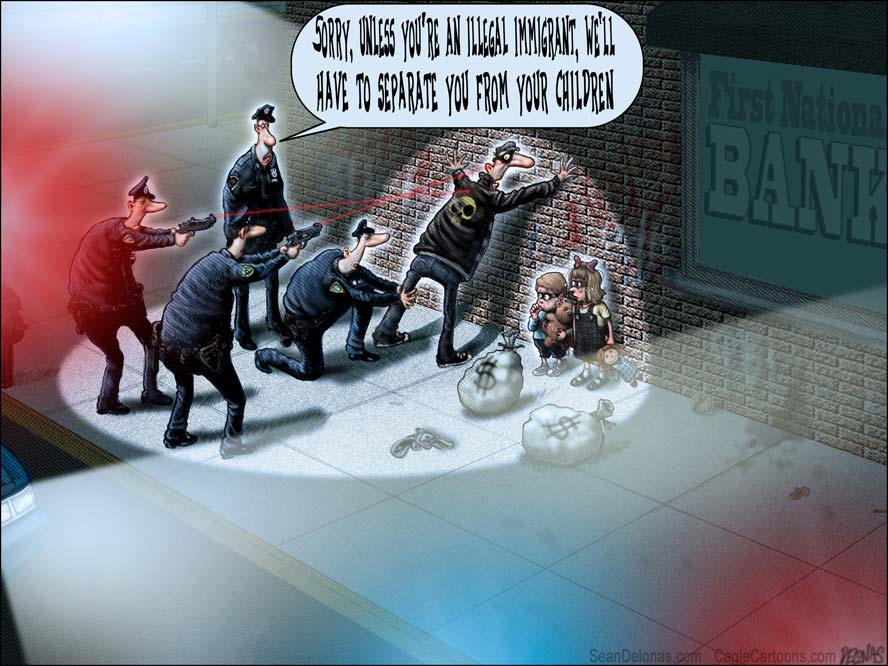 And the wave of emotion in America over the plight of families separated and children held in detention along the southern border is as potent as anything we've seen in a while.

It has allowed political actors to say just about anything and get away with it. President opponents gleefully drop the race card. They breathlessly accuse him of child abuse.

immigration policy has even been compared to the death camps of Nazi , as Never Trumper and former CIA Director did the other day on Twitter, to his shame.

Emotion is exactly what politicians want, especially if they have that media prod in their hands, the better to herd public opinion.

held that prod years ago, when the Bush administration pushed its disastrous war in . And have it now, with the specter of those children being separated from their parents along the border.

It makes for power politics.

If you don't feel powerful emotion at the sight and sound of children being taken from their parents who tried to cross illegally over the southern border, you have no heart.

The repeated images of frightened children, some shouting "Papa! Papa!" as they're taken away by federal agents, are horrible and beyond words.

But what's also apparently beyond words is this: The children in the detention centers have now been thoroughly politically weaponized by the left and their allies in the .

The children are the arrows in the Democratic quiver. are panicking, trying to come up with compromise legislation. Polls show Americans are overwhelmingly opposed to Trump's family separation policy.

And so have absolutely no political incentive to help solve the problem in . They'd rather draw their bows and let fly at Trump.

Make no mistake, Trump is deserving of the arrows. He did this ham-handedly, with confused and contradictory messaging. The public relations disaster he created is written on the panicked faces of his fellow .

Yes, the Obama administration engaged in forced separation too, but not nearly to this extent.

Trump was first to weaponize these children. With his "zero tolerance" policy aimed at either deterring illegal immigration or helping negotiate changes in immigration law in , the president took things to a grotesque, draconian level.

And now, and others who are part of the left's no-borders alliance feel they've scored a significant political victory. They're not wrong. They have scored a victory, at least in the short term.

In the past, people crossing the border illegally (a misdemeanor) with children were charged, then released into with the promise they'd return to court. Naturally, few returned. And so, more came with children. They had been given incentive.

Border policy was already a complete mess when former President took office, and he was slammed by the left as a betrayer and as the "deporter in chief."

In 2014, at a town hall meeting, Democrat said deterrence was critically important.

"We have to send a clear message: Just because your child gets across the border, that doesn't mean the child gets to stay," Clinton said. "We don't want to send a message that's contrary to our laws or will encourage more children to make that dangerous journey."

But talking about sending a message when children are involved is quite different from actually sending it.

Trump sent that message and now he's paying for it.

He made securing the border the centerpiece of his presidential run. It propelled him past establishment Republican candidates who tried appeasing the desire of business for cheap labor, without angering those who were economically left behind.

But they were inconsolably angry. And Trump was not about compromise. But he seems ready to compromise now. And , facing the midterm elections, are worried.

and Trump are now focusing on a new plan for the families who don't properly seek asylum at border crossings, but who are caught illegally crossing the border.

The law now limits the amount of time minors can be held to 20 days. One Republican plan would allow children to be kept with their parents in detention for longer than that. A revised bill would give the powers to use $7 billion in "border technology funding" to build family detention centers.

Can you see the problem here? Refugee camps growing along the southern border, families and children held for extended periods, with the left increasing its call to let everybody in and put an end to something as cruel and exclusive as borders.

It could serve as an incentive for others to come, and our new refugee camps could grow even larger, as desperate people run from poverty, the cruelty of their corrupt Central American governments and the violence back home.

In the short term at least, Schumer and the won't budge. Schumer's got those weaponized children in his quiver and ample support in the media.

But what are the long-term consequences? We're not really thinking about the long term, are we?

We don't want to see those children crying. We just want an end to it. And the long-term consequence of policy isn't on our minds.