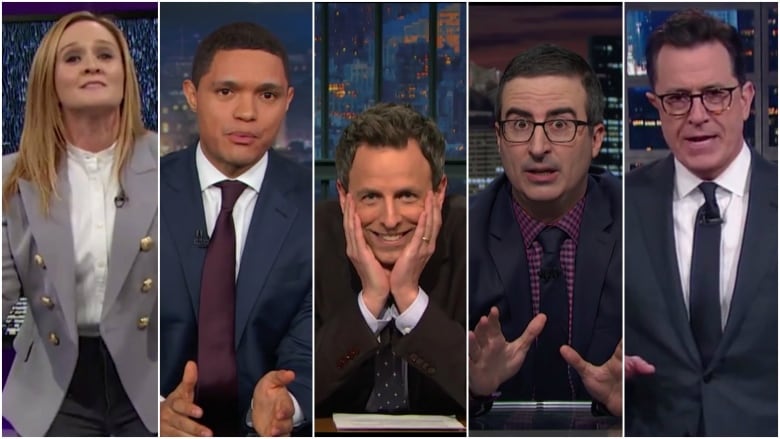 The late-night hosts hate President Donald Trump, so the idea that they would make friendly alliances shouldn't be shocking.

But as we've come to understand, in today's world anything that reflects negatively on this president becomes "news."

So when Stephen Colbert at CBS called up Jimmy Kimmel at NBC and Conan O'Brien at TBS for a joint mockery of Trump, the liberal media jazzed up its importance.

Vanity Fair called it a "Historic Group Chat," as if these were world leaders in arms negotiations. Entertainment Weekly hyped them as superheroes engaging in an "Avengers-esque collaboration." CNN senior media reporter Brian Stelter led his "Reliable Sources" newsletter with the headline "Late night collusion!"

This underlines how liberals elevate late-night comedians and "Saturday Night Live" satirists as the smartest, greatest Americans, an honor they don't deserve.


The "cold open" that Colbert and Fallon presented on their shows was, as usual, a lame series of references to insults President Trump had issued. At a Monday-night rally in South Carolina, he called Colbert a "lowlife" and Fallon a "lost soul." Colbert and Fallon greeted each other with these insults.


Oh, how touchy these comedians are when the tables are turned, where Colbert acting like a "lowlife" registers as a really serious insult. This is the same Colbert who ranted last year that Trump is the "presi-dunce" and "prick-tator" and speaks "like a sign-language gorilla who got hit in the head." Colbert even said the only thing our president's mouth is "good for" is being Russian President Vladimir Putin's penis holster.


All that is acceptable. Calling Colbert a "lowlife" in response is not.


Colbert and Fallon wrapped up by lamely agreeing to do lunch ... at the Red Hen, the Virginia restaurant — #Resistaurant? — that kicked out White House press secretary Sarah Huckabee Sanders.


Trump also mocked Fallon for an interview he gave to the Hollywood Reporter in which he sounded like a distraught teenager when obsessing over being attacked for mussing Trump's hair on his show in 2016. "Choking up," the Reporter writes, Fallon said: "I heard you. You made me feel bad. So now what? Are you happy? I'm depressed. Do you want to push me more? What do you want me to do? You want me to kill myself?"


Comedians are expected to do the left's bidding like pop-culture guerrillas. The agitators apparently driving Fallon to brink of suicide threats never minded when Fallon fawned all over Hillary Clinton.

In 2012, he hosted then-President Obama for a segment of "Slow Jam the News" during which he let Obama push his agenda and then endorsed it, saying: "Awww, yeah. You should listen to the president, or as I like to call him, the preezy of the United Steezy." In 2013, Fallon dressed up as a woman and partnered with then-first lady Michelle Obama for a skit called the "Evolution of Mom Dancing."


All is apparently right with the world when the networks work overtime to confirm the "effortless" coolness of Democratic leaders. But Republicans can never be normalized or humanized by late-night hosts.


When Johnny Carson mocked President Ronald Reagan, it was gentle and had a "just kidding" vibe. All these years later, the left expects late-night comedians to lead a vicious campaign of character assassination to ruin Trump, which is why Fallon's hair mussing gets metaphorically reimagined as treason.