This Is Seth Meyers on Drugs 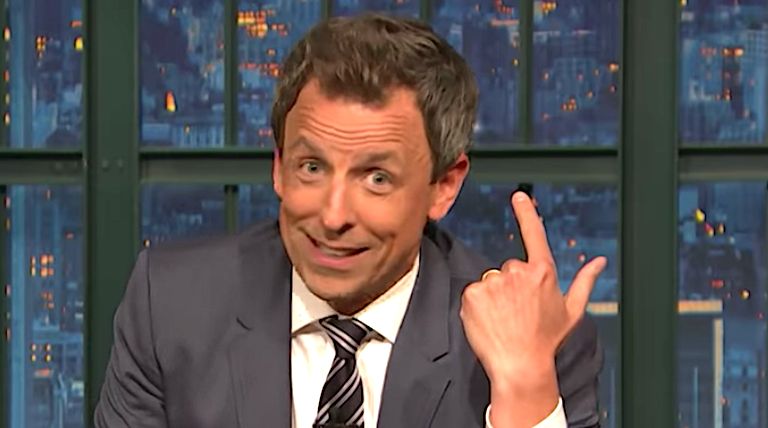 CNN host Van Jones, a former Obama White House aide, interviewed NBC late-night host Seth Meyers with the usual reverence that liberals offer to comedians of the Resistance. "You're an icon. You're a legend," Jones gushed. "You're doing a phenomenal service to the country."

But the best comedy in this interview came when Jones asked about the jesters lining up against President Trump. "You are really tough on him. A lot of the late-night folks are really tough on him," Jones acknowledged. "Do you feel that the red-state folks have a legitimate complaint when they say all these late-night guys are just a, you know, attack squad against the president and there's no diversity there when it comes to ideological diversity or fairness?"

Next he'll wonder if CNN has an issue with Trump, too.

Meyers started with a who-needs-ratings answer: "Look. I can understand that they don't like it. And I certainly respect their opinion to choose not to watch." In other words, this show isn't really performed for anyone other than disgruntled liberals who think they're living in hell.

Then came the line that makes you reach for a drug test: "With that said, most comedians are pretty consistent in calling out hypocrisy and lying. I don't think, you know, we don't every day just say, 'Hey, we got to attack Donald Trump. What is there?' It's the opposite. The thing comes first, and then we realize in order to talk about it is to, in some degree, to attack Donald Trump."

"(M)ost comedians are pretty consistent" on hypocrisy and lying? Does anyone remember the comedians hammering Hillary Clinton when she lied or demonstrated hypocrisy? What we remember is comedians rolling out the red carpet to honor her. Women at Comedy Central nearly fainted in her presence as she winked at them.

Then there is Meyers, who helpfully loaned his star power to the opening of the Clinton Global Initiative Annual Meeting in 2014. He announced: "President Clinton is here! And so is Bill!" The Washington Post later reported, "Bill grinned and applauded from the audience." Meyers the Merciless really let them have it for their hypocrisy and lying.

In the February 2013 issue of GQ magazine, Meyers nominated Hillary Clinton for the GQ "100 Hottest Women of the 21st Century." He told the magazine: "I think somebody who is getting sexier every year is Hillary Clinton. Every year she seems better at whatever she's doing."


In April 2015, Meyers took on Peter Schweizer's book "Clinton Cash" on his show, saying, "It's certainly fair to raise questions about the donations to the Clinton Foundation, but it's also fair to be suspicious of the cottage industry of anti-Clinton books that come out every year." As if he's not part of a "cottage industry" of anti-Trump comedians? He didn't mention his own Clinton Foundation gig from the year before. He then suggested the anti-Clinton books wouldn't be damaging. "She's been attacked for 25 years. It's possible she's built up an immunity to everything," he said. The liberal audience laughed. "At this point, she could walk into Disneyland, lick the handrails at Space Mountain and walk out with a clean bill of health."

When Jones asked how he can still "find the funny," Meyers was more honest about his personal Resistance: "if you can point out how insane it all is, I think that helps keep you sane and keeps bringing you back. ... If you take a few days off criticizing what the president does, I feel like maybe that means he wins, and I don't want somebody to be so abnormal and have them win by us ignoring it."

Trump. Must. Lose. That is the late-night "comedy" rule. That's the only consistency.