' Autistic boy's classmates had never heard him speak. What he finally said at graduation blew them away - Tara Bahrampour

Autistic boy's classmates had never heard him speak. What he finally said at graduation blew them away 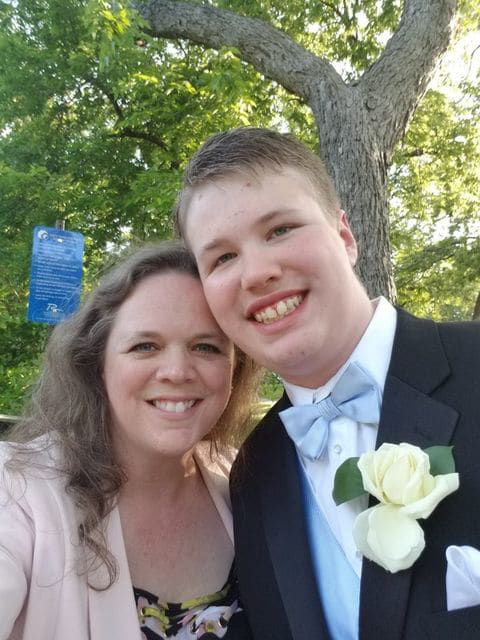 People who know Sef Scott know he doesn't normally speak. The 17-year-old from Plano, Texas, has autism, and other than quoting lines from favorite movies, he is mostly nonverbal.

So the members of the Plano Senior High School Class of 2018 - along with Sef's relatives and even his father - were stunned June 9 when he took the mic and addressed his fellow graduates.

"I would imagine that to the seniors that know who I am that it is entirely unexpected that I would be standing here giving a speech," he said. "Just by my being here speaking to all of you - me - that alone is unexpected." Explaining that his mother and his brother Sim, a brain tumor survivor, helped him write the text, he added, "Knowing that I want to be heard - I imagine that is unexpected."

While many students had seen Sef in the halls, he was largely in special-needs classes and most didn't know him, his mother, Vicki Scott, said. She doesn't know quite why, but when she saw a notice inviting seniors to audition a speech for graduation, she had an inkling that he'd want to do it.

She ran the idea by him, and "he jumped up out of his bed with a full-body shiver and giggle, and he said, 'Yes!' "

His response took even his mother by surprise. "He's not a demonstrative individual at all, and to have him shaking with excitement, with a huge smile, making eye contact, looking at me straight in the eye and firmly saying yes, it was great."

The speech took seven weeks of writing and editing, helped by Sim, 15, who has given many speeches about having had a brain tumor. "He was excited to do what his brother does," Scott said. "He knows that Sim does it for the benefit of others and he knows that people come away happy after hearing him talk."

When Sef started elementary school, his parents worried he'd be a target for bullying. Instead, they saw his classmates holding his hand and leading him to where he needed to go. They decided that they could never move away from the place where other kids knew him and cared for him.

But to get onto the graduation-day podium, Sef had to audition the speech before a panel of judges who did not know him. His mother and brother did not tell anyone else about the plan, and even after he was selected, his father and other relatives had no idea it was coming.

As they sat in the audience, Sef stepped up to the podium.

"Unexpected," he began. "This is what I want you to remember. Unexpected."

The speech wasn't just about Sef. The burly, affable teenager also had advice for the other graduates: to follow their own hopes and goals and not just blindly tread a path that doesn't feel true to them.

"Don't follow someone else's dreams. Don't waste time on something you never wanted. Do the unexpected. It's your life that you are living, not anyone else's, so do what fulfills you. Don't fear the future, don't fear the unknown. Will it be unexpected? Yes. Yes it will. But that does not make it wrong."

He read the speech through, pausing a few times but never stopping. At a couple of points, the audience burst into applause. Then Scott began hearing sniffling around her. Then she started sniffling.

Sef got a standing ovation. Afterward he was surrounded by people offering congratulations.

Luke Traina, 16, a rising junior who was Sef's buddy in an "angel" baseball league for students with special needs, learned shortly before the ceremony that Sef was going to speak. He went there to hear him, with knots in his stomach.

"I was really nervous, I was saying prayers the whole entire time," Luke said. "But as soon as I heard him start I knew he had it. . . . When he started speaking it was like all of a sudden the boy trapped inside him all those years got to have his voice heard."

Brittney Love, a paraprofessional at the school who worked one-on-one with Sef this year, said she had seen him build up confidence and maturity over the past year. For him to give a speech like that felt like opening doors for other kids with special needs.

"I feel like people have no idea what it's like for kids like him," she said. "They're overshadowed. But there's a lot of very smart kids in special needs."

The theme of his speech applied to everyone in the room, --- special needs or not, Love said. "Do what's best for you - I think that's just perfect," she said.

Sef's mother thinks his willingness to speak was driven by a realization that this was the last opportunity he would have to be with the schoolmates he'd grown up with, and he wanted them to know him.

And while he generally prefers to be alone rather than with other people, being on the podium seemed to infuse him with a greater sense of connection to the world.

"Maybe giving the speech in front of the whole room brought an awareness of those around him that maybe doesn't normally enter his autistic world," Scott said. "It makes me think that in recent years, maybe he wanted to all along."