NATO is still practicing for the worst 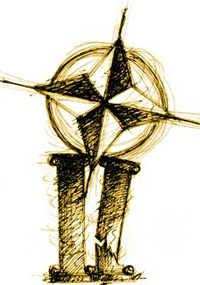 NORTHERN POLAND - Scruffy, yellowish-brown buildings are bunched around a long courtyard; portable toilets and generators have been set up on the dusty ground beside.

Inside, military-grade laptops, the kind that don't break if you drop them, are arrayed along a series of tables, their cables spooling off onto the floor. Men from different countries, some dressed in camouflage, talk in low voices. A large map of Europe's Baltic coast has been projected onto one of the walls, with different colored markers scattered across it.

This is the transatlantic alliance in practice. It's the temporary headquarters of Trojan Footprint, the largest NATO special forces training exercise in recent memory, an operation involving more than 2,000 conventional and unconventional troops from more than a dozen countries, including Germany, Britain, Canada, Belgium, and even Sweden.

It doesn't look like much from the outside, and that's partly the point: It was set up discreetly, outside a nondescript Polish village. Now that it's over, the portable toilets and generators will be removed, the men and the laptops will go home.

This exercise was sort of undercover - I've been asked not to tell you the name of the Polish village - but not entirely. The 10th Special Forces Group, the Green Berets, who were running the operation, are happy for potential aggressors to know it took place.

In particular, they are happy for the large country just to the east of Poland, Lithuania, Latvia and Estonia to know they are planning and practicing for all possible scenarios, up to and including fending off a full-scale invasion.

The Green Berets have been thinking about how to deter invasion in Europe since the 1950s, though for the past 20 years, their attention has mostly been elsewhere. More recently, the Russian military buildup, the Russian invasion of Ukraine (Ferguson describes that as a "wake-up call"), as well as the intensification of anti-European propaganda in the Russian media and a series of large-scale Russian military exercises, have set off warning bells in NATO capitals.

That is especially true here in the Baltic region, because when the Russian military exercises, it practices an invasion of the Baltic states.

If this were ever to happen in real life - sparked by a real political incident, or perhaps a fake one - the first phase might end quickly: The Baltic states are tiny, and could be overrun by Russian forces within hours.

That's why NATO special forces rehearsed the next steps: How to conduct reconnaissance, how to bring irregular troops into the region, how they might meet up once they got there, what they might do.

Because the real next step would involve popular resistance, civic organizations were part of the exercise, too. Lt. Gen. Leonids Kalnins, the chief of national defense in Latvia, told me that his country's national guard, which includes civilians who identify as both Latvian and ethnic Russian, is a critical part of the country's military: "Russian propaganda uses ethnic groups as the main tool to separate the society. We consider this to be hybrid warfare and are fighting against it."

Because online disinformation operations are now part of any conflict, too, some of the soldiers in the exercise used a kind of artificial internet to practice their responses. The point of all these things is to learn lessons, to figure out what doesn't work, to find solutions - and, of course, to build relationships that someday might save lives.

Though nobody planned it this way, the timing of this exercise was significant. It is no secret that, looked at from a greater distance, the Western alliance is in deep trouble, maybe never more so.

A part of the European political class is already asking whether Russia might be a better partner than the United States. For the foreseeable future, the news coming out about U.S.-European relations is going to be bad - maybe very bad.

So think of this column as a form of reassurance. Even as you read about fights between Presidents Donald Trump and Emmanuel Macron of France, remember this: In various quiet corners of Europe, small groups of Americans and Europeans are still devoting their time to one another's mutual safety. If a crisis comes, we might need them.