Another issue of separating children from parents 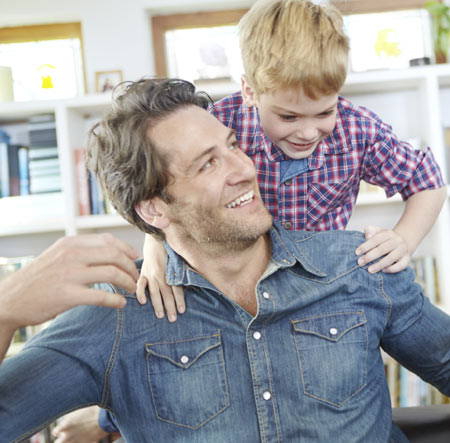 The deservedly big news splashing us all in the face lately has been about the children being ripped away from their illegal-immigrant parents at the U.S.-Mexico border. Many Americans are horrified, which is far from what seems the mostly lackadaisical, yawning reaction to a similar, far more terrifying issue, one in which tens of millions of children live without their father. There are horrible consequences, one of which is too often suicide.

Killing ourselves has been another big news story lately -- the rate has gone up 25 percent since 1999 -- and a joint federal study shows that 63 percent of youths who commit suicide come from single-parent homes, which are almost always fatherless homes. The studies do not stop there. One from Michigan State University, for example, shows 75 percent of adolescent murderers are from these homes, and the Centers for Disease Control says 85 percent of children with behavioral disorders will look in vain to find a father around the house.

I have written about all of this before, also noting, for instance, that an astonishing 42 percent of all American children now are inhabitants of these homes with missing fathers. Then come the angry emails. They tell me poverty is at work here, not a lack of a biological parent. They say I am degrading innocent mothers who do not need a mess of a man around to worsen their lives and abuse the little ones. These mothers can handle everything just fine, I am informed, although they often do need help from the daddy substitute, known as government. What is definitely not needed, I am informed, is someone caught up in preserving an ages-old familial tradition that somehow is no longer necessary for societal preservation.

First off, while poverty can obviously make everything worse, all kinds of evidence shows it is not poverty at work in childhood crises nearly as much as that missing father. For instance, there are poor urban neighborhoods without a lot of crime, but that changes when fatherless homes step in. Getting married helps end poverty. Not getting married often instigates it. Children raised in single-parent homes are far more likely to be poor as adults than those from two-parent homes, perhaps in part because those children from single-parent homes are also far more likely to drop out of school.

Clearly, many mothers do an excellent job of raising their children without a father around, but the strain on them can be next door to cruelty. It is true, too, that there are fathers abusive to both wives and children, men who help nary a bit and are more hindrance than help in child-raising. Unwed motherhood, the principle factor in single-parent homes, can often be a consequence as much as anything of the fathers fleeing responsibility. But men are not inevitably toxic by nature or culture, and, generally speaking, it takes two parents to raise a child. Each sex brings something special to the task, and if you want a well-rounded, emotionally mature, self-reliant adult to arise from a family, it counts for a lot to have a family to arise from.

Government is not going to take care of all of this. It can give money to the needy, but money is not love nor guidance. It is not a male model nor something who can give a daughter more a sense of what and who men are in a world in which there are quite a few of them to deal with. Visiting or live-in boyfriends? Statistics show they are far more likely to abuse children than their fathers are. Some may compensate to some degree or the other while many will just make things worse.

America remains in many ways a great country, but we are also a society in deep trouble. Social norms are disappearing, not just in the White House but among people who think it is somehow funny and smart and courageous to shout obscenities on national TV or to wholly avoid protocols or to disrespect anything and everything, from religious faith to country. Religion itself appears to be dying out around the country, and, while some may cheer that occurrence, there are dire communal and personal consequences. An example gets us back to the suicide issue â€” research demonstrates people who attend church regularly are less likely to take their own lives. And suicide is one of a number of reasons, also including widespread opioid abuse, of an increasing death rate. Trust is declining, not just in media and political institutions, but in everything, even including next-door neighbors. Mass incarceration is ruinous.

Family is and always has been a fundamental building block of society. Let it continue to fade away and see what happens to us. The recent concern about parents and children being separated from each other at the border shows people can just maybe be moved as well to look at this broader, difficult, horrendous separation of children from fathers and to engage in making changes and fighting to restore old moral principles without which we are lost.