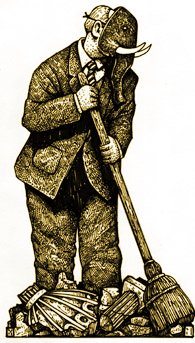 On Nov. 9, 2016, in the stunned afterglow of Republicans taking the White House and holding both chambers of Congress, former House Majority Leader Eric Cantor put it plainly:

"It is now time for Republicans to govern," he said on CNBC. "There'll be no excuses now. And I think the number one focus will be repeal and replacement of Obamacare. I think that's where they'll go first."

Cantor was right, and it's a reminder Republicans need to hear today, as they return from recess with the first six months of the Trump presidency almost over.

Members of the GOP majorities need to realize that they have a job to do right now. Contrary to what many politicians seem to believe, that job is not, first and foremost, to get re-elected. Under President Barack Obama, Republican leaders had an effective formula for that. They would hold message votes, pass bills such as the repeal of Obamacare that had no chance of becoming law, avoid forcing members to take difficult votes, and suppress dissent and display unity by curtailing the committee process and the tradition of floor amendments.

That won't work anymore. There is now no easy formula for Republicans to win elections. The job of Republicans, now that voters have handed them control of the federal government, is to govern.

Specifically, they must repeal Obamacare and make sure that its replacement is reasonable, responsible and workable. Then voters will support it. Second, Republicans need to reform the complex, distorting federal tax code, for both individuals and corporations, rekindling economic growth and, again, winning voter support.

Neither of these tasks will be easy. Both will, indeed, be very difficult, and will meet fierce opposition. But important jobs are often hard, and the nation sent the current crop of lawmakers to Capitol Hill to do this one.

The promise to repeal Obamacare is the central pillar of Republican control of government. Its passage in 2010 guaranteed the GOP takeover of the House. Republicans lost in 2012 when they nominated Mitt Romney, who had created Obamacare's predecessor in Massachusetts. Running on Obamacare repeal won the Senate in 2014. Trump won the White House in 2016 promising grandiosely to repeal the bill on his first day on the job.

Rushing repeal and replacement was never a good idea, and the American Health Care Act's failure in March highlighted that. It raised doubts around the country about whether Republicans were capable of governing. Most of Washington blamed that failure on intransigent conservatives in the Freedom Caucus. That charge stuck because in the Obama days, the Freedom Caucus felt free to be the loyal opposition to the loyal opposition, the out-of-power caucus within the out-of-power party.

But then in May, the Freedom Caucus negotiated, cut deals, compromised and, in the end, voted "yes." It started to try to govern rather than simply oppose. Conservatives weren't the only ones to adapt. The Tuesday Group of centrists splintered, and enough of them got behind the bill. House Speaker Paul Ryan also changed his ways and fostered a more collaborative, not merely consultative, legislating process.

There's still a long distance to cover before Republicans can be said to be governing. The healthcare bill needs to pass the Senate, pass the House again and become law.

Republicans need to do tax reform, and as a practical matter, they need to get it down before election season heats up next year. On both of these efforts there will be dozens of competing interests.

First, there's K Street and the donor base. Industry lobbyists generally oppose Republicans' repeal and replacement of Obamacare. Special interests trying to protect their credits and loopholes have successfully fought off tax reform for years.

Passing the bills they need to pass will require, at some point, telling lobbyists to buzz off and telling the donors they don't call the shots.

Second, there's political pressure on vulnerable incumbents. Liberal activists are dialing up the heat, and many Republicans are terrified of losing if they vote for something unpopular. But Obamacare is crumbling and needs to be replaced.

Likewise, our tax system needs to be reformed. Statesmanship requires taking unpopular stances. So, lawmakers, screw up your courage and get it done.

In any event, Republicans worried that an unpopular vote will cost them their seats need to realize that there is no safe harbor anymore. Failure to govern will also cost Republicans their majority. Their choice is between being thrown out of power for incompetence, and heading into the 2018 midterm elections having demonstrated ability and resolve.

Coming up with a tax bill and a healthcare bill that can pass both chambers will be very difficult. Passing them will be risky. Governing isn't easy, but for Republicans today, it's their job.