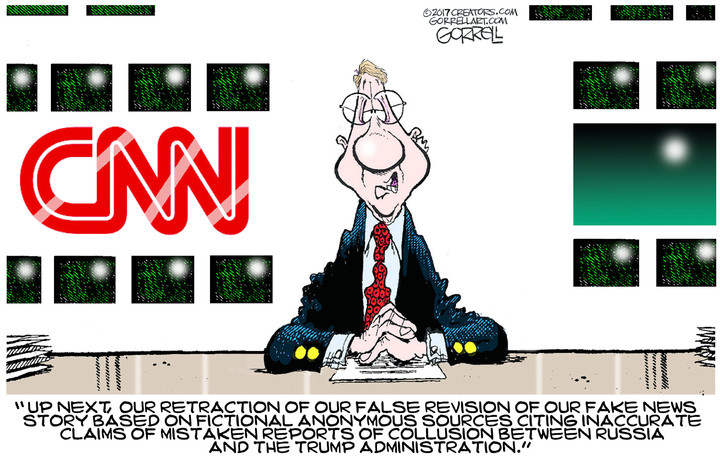 Thomas Frank, a reporter for "CNN Investigates," last Thursday appeared to have a compelling exclusive on the story of the year. The Senate Intelligence Committee, reported Frank, was investigating a Russian investment fund - the Direct Investment Fund (RDIF) - "whose chief executive met with a member of President Donald Trump's transition team four days before Trump's inauguration."

That transition team official is Anthony Scaramucci, a Wall Streeter who was expected to take a prominent White House position but did not. Scaramucci met in January with RDIF head Kirill Dmitriev.

The CNN exclusive - which hung from one unnamed source - didn't take long to wither. Breitbart News' Matthew Boyle bombed the CNN piece as baseless. Sputnik News published a refutation, indicating that the fund was not a part of Russian state bank Vnesheconombank, as the CNN report had claimed. This detail mattered a great deal, considering that Vnesheconombank was listed in a set of sanctions issued by the U.S. government.

According to the CNN report, the Senate Intelligence Committee's probe into this matter was linked to the meeting between top Trump adviser/son-in-law Jared Kushner and Vnesheconombank CEO Sergey Gorkov during the presidential transition.

Scaramucci himself chimed in, tweeting:

"It's ok. I did nothing wrong. They like hitting friends of @potus who are loyal advocates on his behalf."

Now for the consequences.

CNN announced on Monday afternoon that three network officials are leaving their jobs over the incident: Frank, the reporter on the story; Eric Lichtblau, a recent CNN addition from the New York Times who edited the piece; and Lex Haris, the executive editor of "CNN Investigates." The moves follow an investigation carried out by CNN executives over the weekend, with the conclusion that longstanding network procedures for publishing stories weren't properly followed. "There was a significant breakdown in process," says a CNN source. "There were editorial checks and balances within the organization that weren't met."

The official CNN statement: "In the aftermath of the retraction of a story published on CNN.com, CNN has accepted the resignations of the employees involved in the story's publication."

Regarding the personnel changes, a CNN source said, "The individuals all stated that they accepted responsibility and wanted to resign." A compelling wrinkle in the saga of the story springs from the careful language in the editor's note: "That story did not meet CNN's editorial standards and has been retracted. Links to the story have been disabled. CNN apologizes to Mr. Scaramucci," it reads.

CNN is not bailing on all the factual representations in the story, however. "We pulled it down not because we disproved it," says a CNN source, adding that there was "enough concern" on some factual points that "given the breach in process, we decided to pull it down."

The event is a cataclysm accentuated by the peculiar bind in which the 24-7 network has found itself. CNN tops President Donald Trump's list of objectionable news outlets, one that he famously claimed in a January transition press conference was "fake news," even though the reporting he was referring to - about high-level intelligence briefings - was 100 percent correct. Trump fans everywhere have taken up the fight, hammering the network every time it equivocates or otherwise over-reports the Russia-Trump line of inquiry. In the regular White House briefings, Press Secretary Sean Spicer carries on a sneering and long-running feud with CNN correspondent Jim Acosta, perhaps the press corp's most outspoken detractor of the White House's no-camera and no-audio briefings.

That context explains the speed and severity of CNN's personnel moves over the Russia-Scaramucci story. An organization of nearly 4,000 news professionals; an organization that has spent huge sums recruiting ever-greater reportorial muscle; an organization that promises both sides a fair shake; an organization that values right-on-the-money exclusives - it just cannot abide getting shamed by Sputnik and Breitbart. A CNN source rejected the notion that the company does anything differently because of the pressure coming from the commander-in-chief and his supporters. "We don't feel hemmed in by the administration or the words that they use at all," says the source.

Nor is the Russia-Scaramucci story the only recent CNN black eye. In advance of former FBI Director James Comey's Senate testimony, CNN used four bylines - Gloria Borger, Eric Lichtblau, Jake Tapper and Brian Rokus - to report that Comey would contradict Trump's claims that the fired FBI chief had told him that he wasn't a target of an investigation. Instead, the opposite turned out to be the case: Comey confirmed those claims of Trump. The story piled poor editorial judgment on top of faulty reporting, in that there was little merit in predicting Comey's testimony a day or two before he gave it. A CNN source insists that the Comey-prediction screwup was "not connected" to its handling of the Russia-Scaramucci episode. "That said, we have to play error-free ball," says the source.

At a panel discussion Friday afternoon hosted by the Washington Press Club Foundation, CNN senior congressional reporter Manu Raju addressed these difficult journalistic times. "You just cannot screw up in this environment because they'll use every small mistake to come after you and suggest that you have some nefarious motive in your reporting," he said.

Journalism mills presiding over acts of misconduct have a patented approach to juggling the public demand for punishment with their preference for keeping their beloved colleagues: the suspension. That this case didn't end with such a lousy and always unproductive resolution underscores the stakes for mainstream media outlets reporting on the Trump administration.

Critics will long cite this episode as evidence that CNN is precisely what Trump has called it - "fake news." Yet the departure of three journalists immediately following a mangled story provides a counterpoint to this particular slander. Purveyors of fake news, after all, don't take drastic personnel moves following a bogus story. They rejoice in it.