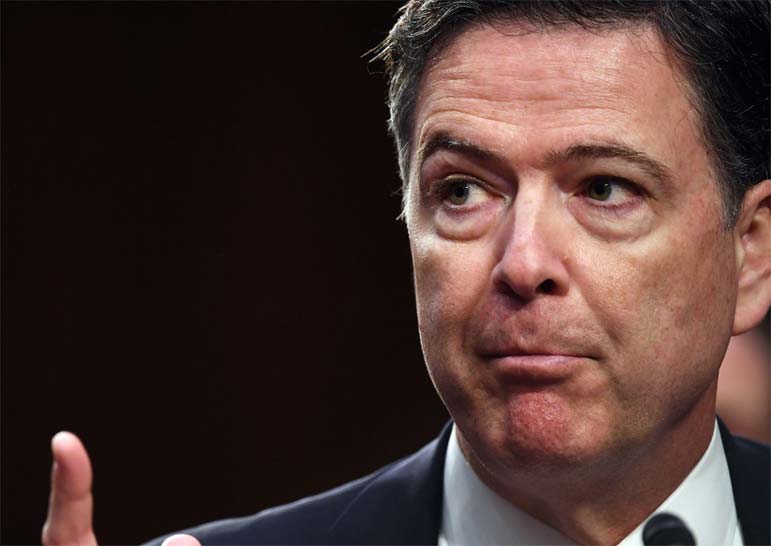 Readers have demanded to know what I think of the James Comey hearing. In the words of Daffy Duck, shoot me now.

Okay, the slightly longer answer is: I don't think about it. And there isn't enough money in the world to pay me to think about it. But, if you insist, I will make a couple of points:

1) The FBI should not be in the counter-intelligence business. There are, as Democrats never tire of pointing out, "17 intelligence agencies", which is, by my count, 15 too many. We should at least get it down to 16, by eliminating what's meant to be a domestic policing agency.

2) As I've pointed out in recent weeks, someone seems to be holding the US Constitution upside down: We have courtrooms presuming to be legislatures, and the legislature pretending to be a courtroom. Both perversions are part of the systemic dysfunction that obstructs proper representative government. The allegedly Republican Congress should investigate less, and try legislating some of the President's agenda.

3) On October 19th last year I called Comey "a 6' 8" gummi worm". That was very much on display on Thursday, as the straight arrow writhed and agonized over what he might have done had he been a "stronger man". He is far too psychologically weird and insecure ever to have got close to being FBI Director (far weirder than Hoover, even if you believe every single story about the guy), and the fact that he did ought to be deeply unnerving to Americans.

4) As everyone more sentient than an earthworm should know by now, "the Russia investigation" is Deep State dinner-theatre. I wrote a while back that, in today's Hollywood, what Hitchcock used to call "the MacGuffin" - the pretext that sets the caper afoot, the secret papers, the microfilm - has degenerated into a MacNuffin: there's no longer even a pretense that these stories are about anything. The "Russia investigation" is the ne plus ultra of MacNuffins, so smoothly transferred from Los Angeles to Washington that one vaguely suspects some studio vice-prez who bundled for Hillary came up with the idea as a reality-show pilot that accidentally bust out of the laboratory.

How do we know there's no there there? Well, consider Marco Rubio's question to Comey:

Rubio marveled at how many leaks have occurred during the Trump-Russia investigation, saying "we've learned more from the newspapers sometimes than we do from our open hearings."

"Do you ever wonder why, of all the things in this investigation, the only thing that's never been leaked is the fact that the president was not personally under investigation, despite the fact that Democrats and Republicans and the leadership of Congress knew that and have known that for weeks?" he asked.


It seems Comey doesn't ever "wonder" about it, being too busy - like everybody else - leaking stuff himself. The leaks, as have often been pointed out, are the only actual crimes here.

But Rubio's right: Trump is not "under investigation". That's a significant fact, and the only unleaked fact. Everything else leaks non-stop: Someone who met with someone who once worked for Trump in some hotel near Trump Tower two months before he launched his campaign once had business dealings with someone who knows a Kazakh oligarch who used to be close to someone close to Putin...

This is thin gruel. It only thickens and congeals and sticks if in the general atmosphere Trump himself is believed to be "under investigation".

He isn't, and never has been. Comey confirmed that to Trump three times. As far as I'm aware, I'm not a suspected Russian agent, but I know something about being mired under a cloud of suspicion. In the Mann vs Steyn case, I have made the point in court filings to the various lethargic jurists that being an alleged defamer is a serious slur on one's reputation that should entitle one to a speedy trial. To no avail, of course: we're about to enter our sixth year in the clogged toilet of DC justice, and no nearer a trial date in that joke jurisdiction than we were on Day One. Likewise, were my local paper to report "unnamed sources" claiming that the sheriff's department was investigating me as a suspected drug dealer, I would expect the sheriff to issue a statement saying that there was no such investigation. How much worse is it for the incoming chief of state of the global superpower when false rumors are circulating that he's a Russian agent? And these rumors are being disseminated with the express intent of crippling his incoming administration before it's even come in?

Comey's rationale for refusing to announce in public that Trump isn't "under investigation" was that that situation might conceivably change in the future. That's like the sheriff refusing to confirm that I'm not under investigation because he doesn't know whether I'll hold up a liquor store next week. Given the damage done by the leaking of every vague guilt-by-association rumor but not the central fact of the case, Trump was right to fire this guy - in the national interest.

As is now plain, it's a "Russia investigation" because Russia is the easiest MacNuffin. Anything else is too complicated: If Trump were alleged to be an agent of the ayatollahs or Kim Jong-Un, that would place it too close to the real world of actual geopolitical concerns. But "Russia" is just the generic Cold War bad guy from byzantine double-agent plots like Tinker, Tailor, Soldier, New York Real Estate Developer.

The real scandal here is that the vast all-seeing permanent bureaucracy is investigating its political opponents - for no good reason, only for a general fishing expedition. The "Russia investigation" is a misnomer for what it really is: a domestic investigation of US citizens without any probable cause. They've come up empty, or you'd know it by now.

5) So what exactly has "the Russia investigation" been investigating for over a year now? Aside from arseholing around at taxpayer expense leaking the identities of US citizens they've improperly surveilled, what the hell do they do all day, every day, for months on end?

If that's not a crime, it ought to be. But we do know that, whether or not the surveillance is improper, the leaks therefrom are certainly a crime. Yet they're now such an ingrained habit at the FBI that the lads occasionally forget themselves and leak stuff that's nothing to do with "the Russia investigation" - like the Manchester bombing info shared by the Brits that Theresa May got so mad about. Being flattered by ideologically simpatico journalists as an "unnamed source" can become addictive. Nevertheless, it's damaging US credibility with allied intelligence services, and that will have consequences.

6) What happens if Trump is impeached and removed from office? Easy: Having tasted blood, "the Russia investigation" will move on to Mike Pence, and Comey's successor will announce he can't confirm or deny whether Pence is under investigation. So Pence will be impeached and removed, and Speaker Ryan will become the next person whose status as crack Russian undercover operative can't be confirmed or denied, and so it will go all the way down through the President Pro Tem of the Senate and the Secretary of Transportation and the Director of the Bureau of Paper Clips. Oceania has always been at war with Eastasia, and Trumpiana has always been in league with Russia.

Or to return from Orwell to Hitchcock: in North by Northwest, Cary Grant plays a blameless New York advertising executive mistaken for a spy called "George Kaplan". There is no "George Kaplan": He's an invention of someone who describes himself as being "part of the alphabet soup" of federal agencies. To create the impression there is a real "George Kaplan", they check him into hotels across America and have his suits sent for drycleaning - in order to make the Russians expend vast resources chasing him from town to town. Sound familiar? All that's changed is that the roles have been switched, and the "alphabet soup" has now set Americans chasing imaginary Russians.

Okay, that's half-a-dozen points. But enough: This is the all-time greatest MacNuffin. I repeat the key question: What do the "invesigators" of the vast money-no-object "Russia investigation" do all day?

At this rate, we'll be so busy investigating whether a school chum of Barron's has parents who considered employing the sister of the Russian Embassy's Deputy Under-Assistant Charge d'Affaires' Hispanic nanny that Putin will steal the 2020 election for Reality Winner - and no one will even notice.