Gorsuch asserts himself early as force on Supreme Court's right: Newest justice proven himself to be a self-assured jurist unafraid of the big stage 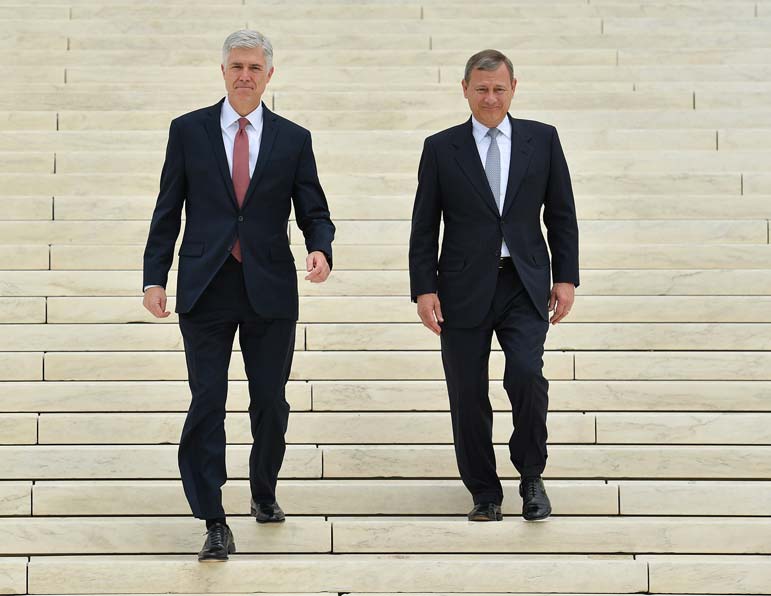 Associate Justice Neil Gorsuch, center left, is accompanied by Chief Justice John Roberts as they walk down the steps of the U.S. Supreme Court. Ricky Carioti -- The Washington Post

On Day 78 of his lifetime appointment, the Supreme Court's newest justice, Neil Gorsuch, revealed himself Monday to be:

• Skeptical about the reach of the court's two-year-old decision granting same-sex couples the right to marry;

• Further to the right than almost all of his colleagues on gun rights.

• Unwilling to lend his full support to Chief Justice John Roberts' opinion in a major separation-of-church-and-state case, because of disagreement over a two-sentence footnote.

• Willing to let President Donald Trump's travel ban be enacted as planned, without imposing the limits most of his colleagues required.

If the Supreme Court's compromise decision Monday on the travel ban grabbed the headlines on the court's final day, those who study the court were at least as focused on what they could learn about the 49-year-old Coloradan chosen by Trump to fill the seat of the late Antonin Scalia.

The bottom line, according to most accounts, is that Gorsuch is a Scalia 2.0, perhaps further to the right.

"The Gorsuch we were sold during the confirmation battle is the Gorsuch that we got," said Elizabeth Slattery, a legal scholar at the conservative Heritage Foundation.

And she meant that in a good way.

A view from the other side:

"Gorsuch claimed that he could be independent of the authoritarian, anti-Constitution president who nominated him, but he failed his first real test," said Elizabeth Wydra, president of the liberal Constitutional Accountability Center, referring to the travel-ban case.

And she meant that just the way it sounds.

Gorsuch has spoken of the humility that comes with putting on the "plain black polyester robe that we buy with our own money at the uniform supply store."

But in his short 2 1/2 months on the Supreme Court, Gorsuch has proved himself to be a self-assured jurist unafraid of the big stage. He asked 22 questions at his first oral argument. He writes frequently - and well, as even his critics acknowledge - and has been willing to go it alone in providing his own reasoning in an opinion even when he agrees.

"He's asserted himself in a way that is really without precedent for a justice in the modern court," said Ian Samuel, a former Scalia clerk who teaches at Harvard Law School.

Gregory Garre, a former solicitor general under President George W. Bush, cautioned against any "broad pronouncements" on Gorsuch. The justice did not take his place on the court until April 10 and thus participated in only one of the court's monthly oral-argument sessions.

He wrote one majority opinion for the court, which was unanimous.

The views he expressed on the final day came in dissents or concurrences he wrote or joined with other justices. He has sided far more frequently with Justice Clarence Thomas on the court's far right than with Roberts, closer to the center.

Garre said Gorsuch showed he "was perfectly willing to differ with his new colleagues, albeit 'respectfully,' as he was quick to point out."

Said Slattery: "In his early opinions, he's shown that he is committed to careful statutory interpretation. In his first majority opinion, he pointed out that it's the role of courts to 'apply, not amend, the work of the people's representatives,' in narrowly reading a federal law dealing with debt collection."

Jonathan Adler, a Case Western Reserve University law professor writing in The Washington Post, described Gorsuch as "a confident, committed textualist with a distinctive writing style - and a justice who is not afraid to challenge his new colleagues."

It does not mean he convinces them.

In a complicated case involving which court should hear complaints from federal workers who say they were wrongly terminated, Gorsuch dissented from an opinion by Justice Ruth Bader Ginsburg. He accused Ginsburg of tweaking the law as written to reach an outcome he acknowledged might be easier for everyone.

"Respectfully," he wrote, he "would instead just follow the words of the statute as written."

There was no need to tweak the statute, Ginsburg replied, but only "to read it sensibly." All justices except for Thomas agreed with Ginsburg.

Later, on the final day of the term, Gorsuch wrote a concurrence to one of the court's orders "for no reason other than to disagree with" Roberts, who had written a dissent, noted Samuel, the former Scalia clerk.

Daniel Epps, a law professor at Washington University in St. Louis who produces a podcast with Samuel about the Supreme Court called First Mondays, said he thought Gorsuch's opinion was "perfectly fine and respectful" - but also gratuitous.

"It was a strange hill to fight on for a new justice, and it makes me wonder about the dynamics between them if he was willing to spar so publicly with the chief," Epps said.

The court had only eight members in the 13 months between Scalia's death and Gorsuch's confirmation, and all agree it affected the court's docket.

"These days, blockbuster terms seem more like the rule than the exception," said Kannon Shanmugam, a Washington, D.C., lawyer who frequently argues before the court. "By that standard, this year was the exception. The court had few headline cases and a lot of meat-and-potatoes ones."

Added John Bursch, another Supreme Court practitioner, "It was clear the court was doing its best to avoid controversial issues and decisions that would result in 4-4 ties."

Roberts, the court's master strategist, was seen as instrumental in helping the court find a narrow path through a thicket of cases that seemed destined for deadlocks. He seems positioned to become the court's pivotal justice in the future.

"One of the most interesting things about Justice Gorsuch in the few decisions we have seen is the number of times he has joined forces with Justice Thomas," who is often on the court's far right, Garre said. "The chief justice, by contrast, has seemed more willing to find ways to broaden coalitions. ... The chief seems content to occupy more of the middle ground on the court, increasing his influence in closer cases."

But all of that leads to something that did not happen on the final day - any indication from Justice Anthony Kennedy, the court's justice-in-the-middle, that he is ready to retire.

"For all the talk of change with the arrival of Justice Gorsuch, the direction of the court remains very much tied to Justice Kennedy," Garre said.