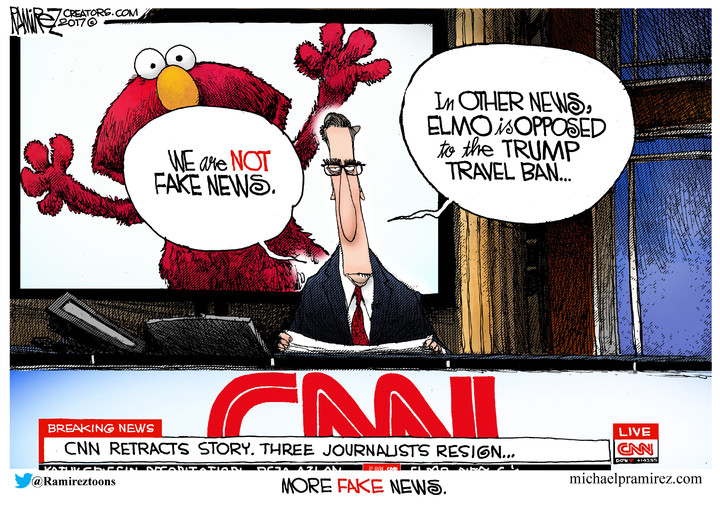 When I was a young reporter, in a climate full of great political change and anger and revenge and sniping from the shadows that was very much like the Washington of today, I learned a valuable lesson about sources.

It involved a mayor who threatened the established order of , a secretly recorded tape released to damage that mayor's reputation and unnamed sources.

The art of the leak is the way politics works everywhere, and I'm reminded of it now, as burns its credibility in its war with President with a botched anti-Trump story that has forced the resignation of three senior journalists.

Because in this modern war, waged by and much of what we call the Beltway journalism establishment, or simply The Hive, one thing stands out:

The use of anonymous government sources in the media's persistent effort to portray Trump -- without any evidence so far -- as something of a plaything of the Russians in the 2016 election.

How many anonymous sources have been used in this war, waged by and other media outlets for the hearts and minds and eyeballs of the angry anti-Trump demographic and the massive advertising revenue that demographic represents?

Are there dozens of sources, hundreds? Or has it been just a few, passed around?

And what are their motivations?

It's impossible to say, when you consider how just one story can be repeated countless times as absolute fact by countless political activists on TV who pretend to offer analysis but who generally just serve up the talking points.

In the hyperpartisan atmosphere of Washington, where Trump threatens the establishment and the establishment fights back, and speculation and anger run wild, the political motivations of sources are kept secret from readers and viewers of news.

Reporters know the motivations of their sources. They can be noble whistleblowers or craven political operatives, or both at the same time. It doesn't matter.

Sources provide a valuable service in a free republic and offer what journalists live on: information.

And it was information that came to the in the early years of then-Mayor first term.

It was a long time ago, in the 1980s, when women wore big hair and shoulder pads and red lipstick and men wore Armani.

Washington was the city's first black mayor, fighting with the established white Democratic power structure of led by Ald. , who is now, even at his advanced age, facing federal criminal tax charges.

Liberal historians call it a racial thing. Vrdolyak was the leader of the white bloc, the so called "Vrdolyak 29," but there was more to it than race.

It was about power. And I was a young reporter in the middle of it all.

Washington had a meeting with an ally, , asking him not to run for the office of alderman, which was held by a ridiculous personality, Ald. , a woman of impossibly big hats who once reportedly waved a handgun at voters.

Her wild talk often embarrassed Washington and made it easy for his opponents to lampoon him.

In their conversation, Washington mocked Tillman, but he told Burrell that he needed her where she was. Washington grew up in the Democratic machine, and though he presented himself as anti-machine, there he was, talking to like a machine boss.

What Washington didn't know was that Burrell had a tape recorder in his pocket, and the recording made its way to , now a columnist at the Sun-Times but then a columnist for the .

The Tribune's editor then was , who'd spent years in and later bred the winner Monarchos after he left the newspaper business. He was a mercurial personality who often terrified his deputies and thrived on what he called "creative tension."

He had a thick drawl when he wanted, and he used that drawl in a meeting of the political reporters when the Tribune was about to publish the transcript of the damning Washington tape.

He said we'd print it, but he also said that we'd say where it came from: the Vrdolyak camp.

I don't remember his exact words -- I was a kid trying to hold on to his job and I kept my mouth shut and stared into the carpet -- but I do remember the reactions of older reporters after we left the room.

They were furious. They snapped their suspenders. They stubbed out their smokes. They turned red, and a few sputtered.

It was a huge story in a city torn apart by politics, much as Washington is torn today.

And the old-timers asked: How could we burn our sources? How would anyone talk to us again?

But Squires understood what was important.

It wasn't the sources. And it certainly wasn't the feelings of politicians. It was all about our readers, and our credibility.

In the end, Burrell admitted secretly taping the conversation. But the Tribune made clear that the tape came to light through Vrdolyak's people.

If we hadn't told our readers where the tape came from, if we acted as if it some angel on a mission of truth just dropped it on the way back to heaven, we'd be doing a disservice to journalism.

I've been a reporter a long time now, and I'm certain that on occasion I haven't disclosed the motivation of every source I've used since then, but I haven't forgotten the lesson:

On stories like that one about the mayor, or stories like those of today, involving the intelligence leaks against the president, telling the consumer of news about the motivations of those doing the leaking wouldn't hurt.

It wouldn't hurt at all.