Bernie Sanders, the Left, Christianity and the Constitution 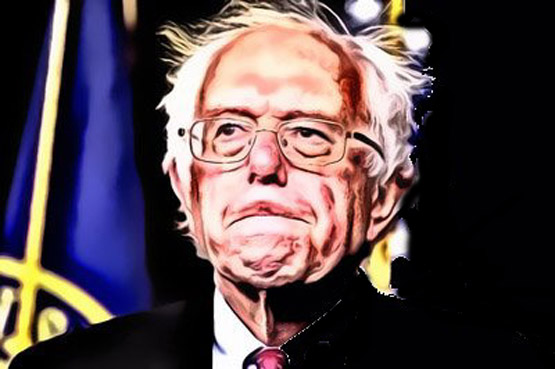 is almost here and, naturally, many are planning those barbecues.

By tradition, Americans will burn some meat and eat cob corn and drink beer. Some of us might even talk politics.

What if someone hears you?

So it's rather doubtful that your barbecue guests will bring up and his religious test for Christians in public office.

Instead, we'll wipe rib sauce from our lips with red-white-and-blue paper napkins as some precocious eighth-grade niece or nephew mentions the and the Bill of Rights. Another guest may offer bromides about the land of the free.

But not many will want to talk about what said.

Those who don't know won't care. Those who do know might avoid talking about it, because it may make people uncomfortable.

It happened a few weeks ago, in , during a confirmation hearing for , a devout and the president's nominee for deputy director in the .

Sanders, the socialist who vigorously challenged for the Democratic nomination for president, is an interesting and compelling figure in American politics.

If he were just some angry fringe lefty, I wouldn't be writing this. But comes off as a thoughtful man, and though I disagree with his politics and economic theory, anyone who stands up to the Clinton machine earns some respect.

Sanders is a de facto leader of the national Democratic Party. He's the one shaping it, and using his brand of populism to pull it ever further to the political left.

Because of his political influence, what Sanders said to and about Vought in their contentious exchange is frightening and depressing to people of faith.

Sanders became upset with what Vought wrote in 2016, on a conservative website called The Resurgent, about the firing of Larycia Hawkins, a professor at , a school in western suburbs.

Hawkins had expressed solidarity with Muslims, declaring that they and Christians "worship the same God." That was unacceptable to . Vought, in defending the college, argued that Muslims have rejected as the son of God, and therefore "they stand condemned."

Clearly, Vought used the word "condemned" to indicate that he believed non-Christians would not go to heaven. He was not using the word to suggest they are bad people who deserve to be mistreated.

But Sanders denounced Vought anyway, saying his statement was Islamophobic and horrible, and that such thinking disqualified Vought from a position with the federal government.

"In my view, the statement made by is indefensible, it is hateful, it is Islamophobic, and it is an insult to over a billion Muslims throughout the world," Sanders said. "This country, since its inception, has struggled, sometimes with great pain, to overcome discrimination of all forms." And then he said, "We must not go backwards."

In his questioning, Sanders aggressively zeroed in, asking Vought if he was "Islamophobic."

"Absolutely not, Senator," Vought answered. "I'm a , and I believe in a set of principles based on my faith. ..."

Sanders suggested that Vought was placing Christianity above other religions.

Vought responded: "As a , I believe that all individuals are made in the image of God and are worthy of dignity and respect, regardless of their religious beliefs."

That wasn't good enough for Sanders, who has since gone on to defend his position by saying incorrectly that Vought considers Islam "a second-class religion."

What was clear from Vought's remarks is that, as a , he disagrees with what a Muslim might say on the subject of salvation.

But that shouldn't be a surprise. People of different faiths often differ. One's religion has nothing to do with government accounting in OMB.

And it is why our founders added a clause to Article VI of the that states that "no religious Test shall ever be required as a Qualification to any Office or public Trust under ."

Many Muslims believe that those who don't embrace the teachings of the Prophet Muhammad are infidels. That alone should not disqualify them from government service.

The basic tenet of Christianity is the belief in as the son of God and that, without that belief, salvation is impossible. This should not disqualify them from government service, and the is quite clear on it, though Sanders was unmoved.

"I would simply say, , that this nominee is really not someone who is what this country is supposed to be about. I will vote 'no,'" Sanders said.

Sanders may have believed he was standing up against intolerance.

But is an expression of belief -- that is the key to salvation -- now to be condemned by the left, which has put its own faith in government?

Sanders lecturing a prospective government appointee on theology, and branding a man as hateful for his beliefs demonstrates a stunning misunderstanding of the nature of faith, and of the .

And that this view is held by a leader of the Democratic Party represents a threat to Americans of all faiths. Because it can properly be heard as a warning, by a senator, about the future of freedom of religion in America.

But I don't think many of us would want to touch this subject at our backyard barbecues. It would be much easier to simply drink another beer, and wipe that rib sauce off our lips with those red-white-and-blue paper napkins, and celebrate the birthday of the land of the free.