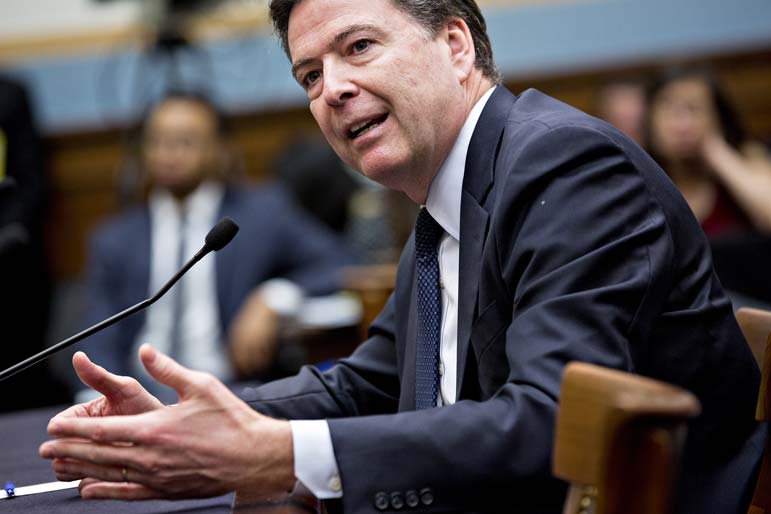 Here are 20 questions I would like asked by senators and answered by former FBI Director James Comey in the course of Thursday's hearing, preferably in this order and preferably without preamble or theatrics:

1. Mr. Comey, you have repeatedly testified before this and other congressional committees in 2016 and 2017 about aspects of the 2016 election and investigations into those matters. Have you reviewed those appearances and that testimony prior to appearing today?

3. Do you feel that President Trump intended at any time to obstruct your investigation into alleged ties between himself, his campaign, campaign associates or transition officials and Russia?

4. Is your standard for "intent" with regard to President Trump and obstruction the same as the standard you employed to determine "intent" in the matter of former secretary of state Hillary Clinton when it came to violating statutes concerning the handling of classified material?

5. If the standards of "intent" differ, could you please explain why ?

6. Did you keep notes about every interaction with President Trump?

7. Did you keep notes of every interaction with President Barack Obama?

8. If your standard for note-taking differed as to interactions with the two presidents, could you explain why?

9. Did you keep notes on interactions with any attorneys general you have served?

11. Did you authorize anyone to review your notes and discuss them with any media outlet?

12. If you did so, whom did you authorize and why?

13. If you did not, how did stories purporting to read from those notes become part of the media reporting?

14. Ought Americans to fear that FBI officials are keeping notes on every conversation they have with an agent of the bureau even when they are not the target of an investigation? Should anyone about whom a record of conversation is being made be informed of such an intent to create such notes?

15. Should contemporaneous notes of any conversation deemed to be in any way politically charged be shared with the inspector general of the Justice Department to assure that the notes are indeed contemporaneous to the conversations they purport to record and are in fact a reflection of the actual conversation that took place and not an exhibit in a false narrative later produced to advantage the note-taker?

16. Was the president a target of any FBI investigation at the time you left the FBI?

17. Was any member of the White House staff a target of any FBI investigation at the time you left the FBI?

18. Was the president or any member of his family a subject of interest in any FBI investigation at the time you left the FBI?

19. If so, did you inform the deputy attorney general of that situation?

20. The American people are intensely interested in whether the Trump campaign or any well-known adviser to it colluded with Russia in the attack on our election. In your opinion, did such collusion exist, and if so, by whom and what was the nature of that collusion?

Bonus Question: Can you name all of those people, if anyone, who helped you prepare for today via so-called murder boards or other such question-and-answer sessions, as witnesses frequently do?