It Could Happen to You

When he became moody and delusional, doctors feared dementia. His family doubted it. Were they ever right! 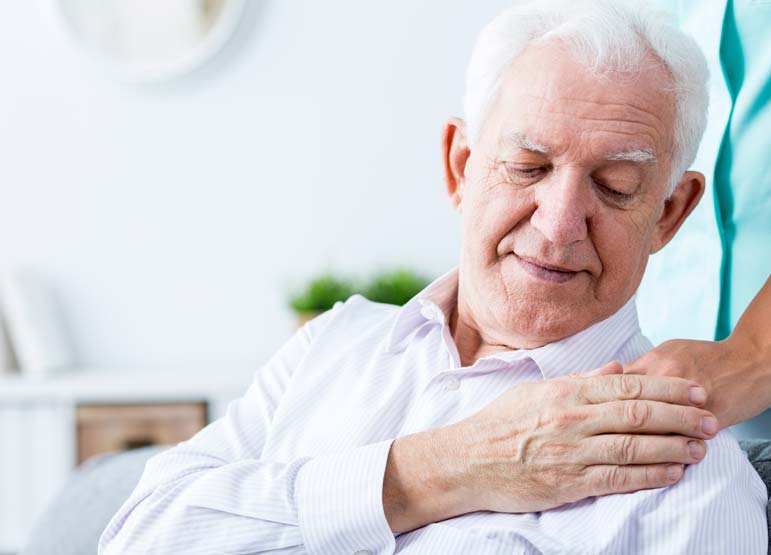 Richard McGhee and his family believed the worst was behind them.

McGhee, a retired case officer at the Defense Intelligence Agency who lives near Annapolis, Md., had spent six months battling leukemia as part of a clinical trial at MD Anderson Cancer Center in Houston. The experimental chemotherapy regimen he was given had worked spectacularly, driving his blood cancer into a complete remission. But less than nine months after his treatment ended, McGhee abruptly fell apart.

He became moody, confused and delusional - even childish - a jarring contrast with the even-keeled, highly competent person he had been. He developed tremors in his arms, had trouble walking and became incontinent.

"I was really a mess," he recalled.

Doctors suspected he had developed a rapidly progressive and fatal dementia, possibly a particularly aggressive form of Alzheimer's disease. If that was the case, his family was told, his life span would be measured in months.

Luckily, the cause of McGhee's precipitous decline proved to be much more treatable - and prosaic - than doctors initially feared.

"It's really a pleasure to see somebody get better so rapidly," said Michael A. Williams, a professor of neurology and neurosurgery at the University of Washington School of Medicine in Seattle. Until recently, Williams was affiliated with Baltimore's Sinai Hospital, where he treated McGhee in 2010. "This was a diagnosis waiting to be found."

McGhee isn't so sure. He wonders what might have happened to him had Williams not ordered a test that proved to be essential in discovering the reason for his dramatic deterioration.

"It happened really fast," recalled McGhee's only child, Melinda, a Defense Department contractor who lives in Northern Virginia. In July 2010, she spent a week at her parents' house while relatives visited from Arizona.

Soon after their departure, her father's behavior changed markedly. He began writing odd notes that he affixed to the refrigerator door. When he didn't like what his wife had made for dinner one night, he left a note on the table that said, "Don't make this again."

"We thought maybe he was upset about something" Melinda recalled, adding that she and her mother initially shrugged it off.

McGhee remembers little other than a feeling of overwhelming exhaustion. "I just wanted to sleep all the time," he said.

Within days, Melinda McGhee said, her father began acting "like a 2-year-old." He was cranky. He could not remember why he had gone into a room or if he had just eaten. He confused day and night.

"It was scary," she recalled. "He'd want to drive, and we had to hide the car keys." She began spending as much time as possible with her parents. Her mother, born in Japan,does not drive or speak English well. So it was their daughter who communicated with doctors, drove her parents to medical appointments and acted as her father's advocate, trying with her mother to make sense of what was happening.

In late July, braced by his wife and daughter because he was too weak to stand unassisted, McGhee was escorted into the office of his internist.

Alarmed by his condition, the internist - who had seen McGhee the previous month for a sinus infection - sent him straight to a local emergency room.

A CT scan was performed to check for a head injury or a stroke, along with an MRI scan of McGhee's brain. Based on his symptoms, doctors suspected he might have normal pressure hydrocephalus, an accumulation of cerebrospinal fluid in the brain that causes confusion and movement problems and can mimic dementia.

The internist, who had ordered numerous blood tests, found little of significance. Because hydrocephalus was high on the list of possible diagnoses, McGhee was referred to Williams, who was then director of the hydrocephalus center at Sinai Hospital.

Williams, who saw McGhee in mid-August, noted that his MRI showed atrophy in some areas of the brain suggestive of dementia. Hydrocephalus remained a possibility, but a form of rapidly progressive dementia, particularly Creutzfeldt-Jakob disease, seemed more likely.

Creutzfeldt-Jakob is a rare, devastating neurological disease that typically strikes people between the ages of 60 and 65. About 300 cases are diagnosed annually in the United States. Few victims live longer than a year after the onset of symptoms, which include rapid deterioration in memory, judgment and coordination.

The disease occurs when the normal structure of prion protein, which is found throughout the body, goes awry, destroying brain cells. Scientists do not know why this process occurs, and no treatment has been found to retard the disease. (One variant form of it, popularly known as "mad cow disease," occurred in England in the 1990s possibly as a result of the consumption of diseased cattle. The classic, dominant form of CJD is not linked to meat.)

"I have seen patients [with Creutzfeldt-Jakob] and it can indeed go that fast," Williams said of McGhee's precipitous decline. Other possibilities, he thought, included frontotemporal dementia, a disease that destroys the brain's frontal and temporal lobes, which govern personality and language, and rapidly progressive Alzheimer's. Hydrocephalus seemed less likely to Williams: McGhee lacked some of the telltale neurological signs, and the tremors in his arms and legs were not typical of it.

But there was no doubt that McGhee was confused and disoriented. He could not spell any words backward or perform "serial 7s" - counting backward from 100 subtracting by 7 - tasks that are part of a mental status exam and would have been easy for him only weeks earlier. He did not know the date - or even the year.

Concerned that McGhee's cancer might have recurred, Williams ordered a new round of tests. He also scheduled a spinal tap to check for infection and an EEG to rule out a seizure disorder.

"It's important to cast a wide net," Williams said, but not to order tests indiscriminately. "Premature diagnosis is how we often make errors. That's a reason we consider the differential diagnosis process," a cornerstone in medicine, in which doctors systematically weigh the possibility of one disease against others based on symptoms and test results.

When Williams saw McGhee a few weeks later, he was worse. McGhee needed a wheelchair and told Williams he thought he was at Travis Air Force Base in California or in Tokyo - places he had been in the past.

"When you see families" in such a situation, Williams noted, "they are scared" witless.

Around the same time, results of the blood tests Williams ordered had come back. Most were unremarkable, except for the Lyme disease screens. McGhee had elevated antibodies to Borrelia burgdorferi, the bacteria that causes Lyme. A Western blot test, which can confirm the diagnosis, was strongly positive.

Whatever else might be wrong, Williams decided, it was clear that McGhee had Lyme disease and would need treatment with IV antibiotics.

McGhee's spinal tap did yield some positive news: There was no indication of Creutzfeldt-Jakob disease, though there was evidence of an infection or inflammation. That did not rule out another form of dementia or other serious illnesses, including a recurrence of his cancer.

Because Williams was scheduled to be away for two weeks, a colleague temporarily took over McGhee's case and oversaw three days of inpatient testing.

In the hospital, Melinda McGhee said, doctors told her they were fairly certain that her father's confusion and other symptoms were the result of dementia.

"It just didn't make any sense," she recalled. How, in a matter of weeks, could he go from a man adept at managing his finances to someone who couldn't find his checkbook?

Doctors, she said, told her that while his deterioration looked sudden, it wasn't. "They would say things like, 'Your dad is a really smart guy, and he's been hiding it from you. It's been going on for a really long time.' "

Once home, McGhee, who had begun receiving two weeks of IV antibiotics, seemed to be getting better. His confusion began to clear, his short-term memory improved and his tremors abated. "I could feel myself recovering," he recalled.

On Sept. 29, he went back to see Williams, who was heartened by the improvement.

"He looked 1,000 percent better than when I last saw him," Williams noted. After reviewing the test results, he concluded that McGhee had been suffering not from dementia but from Lyme meningoencephalitis, a rare bacterial infection of the nervous system that typically occurs several weeks, or even months, after Lyme exposure.

"Spring and summer is when these teeny, tiny ticks come out, and 20 percent of people who are bitten don't have a bull's-eye rash," Williams noted. "And Lyme is on the list of the causes of rapidly progressive dementia," although it is unusual.

McGhee said he was unaware of any tick bite. He wonders if the disease might have taken hold because his immune system was suppressed by the chemo he underwent to treat his leukemia.

Williams said he doesn't think so, because McGhee's treatment had ended months earlier. "He just happened to get two bad things: cancer and Lyme disease," the neurologist said.

McGhee, now 82, made a full recovery and has had no problems since. He wonders where he might have wound up had Williams not ordered tests for Lyme disease.

"I really worry about other people," he said. "Would they just be put in some kind of facility and just waste away? I'm just so grateful that everything turned out so well and to Dr. Williams for making the diagnosis."

Williams said he believes that other doctors would have figured out what was wrong.

McGhee's case, he said, is gratifying. He was delighted to hear from his former patient after six years and to learn that "he's alive and kicking and doing quite well."

"That's part of the joy of medicine," he added.

Previously:
• For half her life, doctors told her to lose weight, but something horribly wrong was going on
• This fit young woman was having strokes, and doctors didn't know why
• With pain was so severe, he was afraid he was going to die. Some doctors didn't believe him. Others, couldn't -- or wouldn't -- help. Until one finally did
• A feeding tube kept her alive. Then a determined medical student figured out the problem
• Simple test proved that a teen with stomach pain wasn't a hypochondriac after all
• A mom's discovery about her daughter's odd teeth leads to a shocking revelation
• For more than two years, he lived with a diagnosis of fatal dementia. He never had it
• What caused a newborn twin's swollen legs