Gun control is fine except for not working 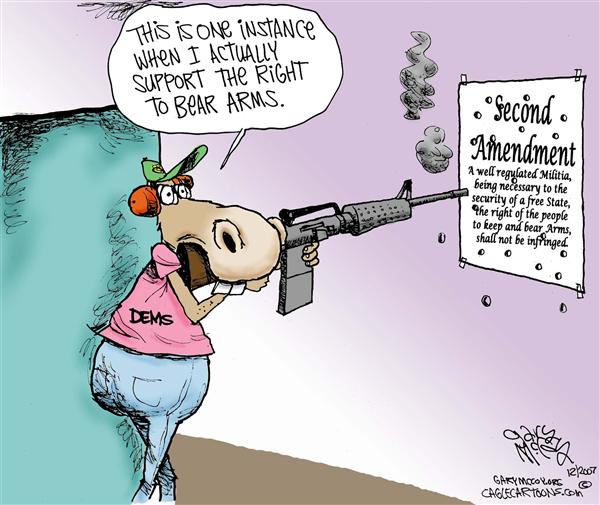 Whenever there is a shooting, liberals have an answer that is not an answer, namely the charade of more gun control. Fine, try it, and maybe some voodoo along the way, but it doesn't work very well, there are better alternatives, and what's truly absurd in this debate is the demeaning expression "gun nuts."

What about "gun control nuts?"

What about people who seem to think murders will go down if fewer guns are sold even though a major crime drop starting in the 1990s was accompanied by a huge increase in the number of guns?

What about people apparently not knowing that we have 300 million guns in this country and getting hold of one will continue to be easy short of mass confiscation that will not and should not happen? Criminals, by the way, mostly get their guns from such means as the black market or a family gift, not through store purchases.

What about people who don't get it that President Barack Obama's calls for gun control made him the biggest gun salesman in American history? Gun sales set records in the Obama years largely because of the fear he might make their purchase virtually impossible. Not a single law he wanted would have shrunk gun sales by a fraction as much as his rhetoric increased them.

What about the fact that a British ban on handguns saw killings increase for the next five years until more cops were finally put on the beat?

What about the fact that back in the days when it had a complete gun ban, Russia had four times as many murders as we had? In that case, does culture have more to do with gun violence than anything, just as culture probably accounts for us having more killings than the Europeans?

By the way, handguns are the first weapon of choice in crimes and mass shootings, and while there are mass shooters who favor the automatic lookalikes, they would still kill without them.

In fact, FBI numbers show knives are used to kill five times more people than all rifles put together and that fists and feet do the deed more than knives.

Finally, what about a 2013 study of studies by the Centers for Disease Control? It failed to find evidence that gun control laws worked but did find evidence for something else: People rescue themselves from crimes on a regular basis with guns, and guns work better than any other safety technique.

I myself do not object to more work on ways to keep guns out of the hands of criminals and the insane if Second Amendment limits are observed. Despite arguments to the contrary, the founders did believe gun possession was an individual right, militia or no militia.

It is also the case that the National Rifle Association does not have lobbying heft because it gets big dough from gun manufacturers but because it represents millions of gun owners who happen to vote.

The recent shooting of a congressman should cause consternation, but the best weapon against misuse of guns is cops with guns plus wise strategies and tactics like the kind that have been used in New York City. It led other big cities in a major way in reducing killings and incarceration through deterrence.