Amid the noise, is there middle ground for talks on U.S.-born terrorists? 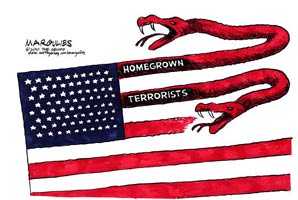 The dead were still being collected at the Pulse nightclub in -- the scene of the worst mass shooting in our nation's history -- when I thought I heard something.

On Twitter and the TV news, the facts were slow to arrive but the sweeping conclusions came instantly. , President and other members of the righteous right and left were pushing their agendas.

I recognized the sound of the politics. It was like the barking of dogs.

Perhaps you stayed glued to your screens, perhaps you're braver than I am, or more driven for detail. But after a few hours, I couldn't take the noise anymore.

So I walked out to my vegetable garden, where I could pray for the souls of the dead and put my hands to work in the dirt and try to think things out in a quiet place.

I mean no disrespect to the dead or their families. Nor do I mean to trivialize the weight of this tragedy. But working the dirt seemed better to me than listening to the barking on cable TV.

The dirt was dry from the heat of the day before. There were a few weeds. And there was a tomato plant that was withering, a gift from a friend at work that I hadn't had time to put in the ground.

I had to find the right place to plant it, a place with plenty of sun in a garden that is becoming crowded.

Its leaves had puckered and drooped. The tomato was still in a tiny pot that I'd watered, but it needed a true home. And I resolved to save it.

So I started digging while saying prayers for the dead, the trowel working in my hand as I spoke the words for them. Out there alone, on my knees, cutting the earth with that trowel, I sang an Orthodox hymn asking that their memories be eternal. And I thought of their families.

Perhaps you, too, said a prayer. Perhaps not. But I hope you thought about the dead and wounded, who were Americans, our brothers and sisters.

The shooter, , reportedly called 911, pledged his allegiance to ISIS leader , and then shouted "Allahu Akbar" as began pulling the trigger.

He took about 50 souls -- a number that might rise, since he wounded about 50 more before he was shot down by police.

, who has whipped the left into a frenzy by calling for a ban on Muslim immigration, bragged Sunday on Twitter that he was right about radical Islam after all.

Trump is putting himself at the front of the movement to do something -- anything -- about Muslim terrorists, but he isn't advocating an all-out war with Islam. In fact, he's a bit too non-interventionist for many of the establishment Republicans who dominated foreign policy in the Bush years. Some of them are already jumping to the Democratic war hawk, . Even among those who stay with the there's an impulse to target Islam, which could further demonize American Muslims and our allies like in the .

Meanwhile, Obama infuriates Trump and many others by refusing to mention "Islam" and "terror" in the same sentence. And the president refused again Sunday.

Obama's presidential address to the nation began with the proper reverential tone. But then he fell back on political tricks. He used his speech to make a push for gun control. And he avoided all mention of Islam.

I don't want a war with Islam, and I understand that many on the right would march us down that path or at least isolate the U.S. from the Muslim world.

But the president appears ridiculous here.

The 2009 terrorist attack at Ford , by U.S. Army Major Nidal Hassan -- killing 13 people and wounding more than 30 -- was deemed mere "workplace violence" by the military under Obama's command. Hassan referred to himself as a soldier of Allah.

By refusing to say the words "Islam" and "terror" in the same sentence, Obama stays his course and looks stubborn and foolish, as if he sees no pattern in the Boston Marathon bombing, the San Bernardino rampage and the massacre.

Truly, it would be wrong to target peaceful Muslims, but can't there be some rational middle ground for discussion on this point?

Self-radicalized terrorists with Islamic ties, born or raised in the U.S., are the new threat. We need a real debate on what to do. Because there will be more attacks like the one in . You understand this, don't you? The pattern is being repeated.

I put it out of my mind by concentrating on working with my hands. After I eased the withered tomato plant into its new home at the edge of the garden and filled in the dirt, it was time to water it in.

There were no barking dogs, just the sound of a cardinal on a wire. I watered the tomato slowly at the stem, until mud formed and water pooled and disappeared into the ground, and did this again and again.

It didn't take long. The plant sucked in the water, those curled and withered leaves becoming flat again, expanding, and eager for the sun. It was quiet out there.

But the quiet doesn't last long in America today. By all odds, this will happen again.