Hillary's the real risk. If we want to stop her, we can't dump Trump 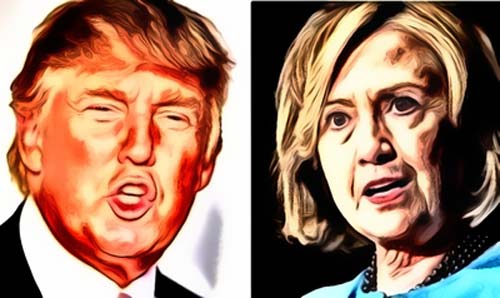 "Today, there's only one thing to discuss."

Thus began Donald Trump at New Hampshire's St. Anselm College on Monday, before he launched into his speech on national security after Sunday's slaughter at Orlando's Pulse nightclub.

He emphasized that political correctness - specifically, President Barack Obama's ongoing unwillingness to use the phrase "radical Islam" - was impeding our understanding of the massacre and our ability to address it. Trump reminded Americans that the principles of radical Islam are not consistent with our principles; they are anti-women, anti-gay, anti-Jewish and anti-Christian. As Trump bluntly put it: "We need to tell the truth about radical Islam."

And, crucially, he reminded Americans that he is not Hillary Clinton, who, for all of her years of government experience, is the candidate who poses the real risk to U.S. security. Not him.

With his undisciplined comments about federal district Judge Gonzalo Curiel the week before the attack in Orlando, Trump was losing ground and the confidence of many Republicans who have reluctantly backed him. But if he sticks with the tone and the focus of Monday's speech, Republicans will stay with him. Despite endless talk of a mutiny within the GOP, if Trump can forcefully expose the weak leadership and serial failures of Obama and Clinton on the fight against terrorism - the central issue of our time - he will not only consolidate support, he will make any talk of an intra-party coup obsolete. On Monday, as he did throughout the primaries, Trump spoke to the Republican base and the undecided middle in a way no other candidate has.

When Trump said, "I will be meeting with the NRA" to "discuss how to ensure Americans have the means to protect themselves in this age of terror," liberals may have blanched, but conservatives cheered. When he said, "I refuse to be politically correct," he returned to the theme that powered him to the top of GOP polls. Promising to provide "our intelligence community, law enforcement and military with the tools they need to prevent terrorist attacks," Trump sent the message that Clinton cannot, and will not, to a country demanding security.

It's not just that voters give him a polling edge on national-security issues, it's that this week he finally returned to what so many voters liked about him in the first place. He's not a policy wonk, and he's not an orator in the mold of Abraham Lincoln. But more than any other right-of-center politician, he relishes aggressively championing Republicans' national-security priorities.

With Monday's speech, a bookend to his strong words on religious liberty at Friday's Faith and Freedom Coalition forum, Trump has returned to a winning message and walled off the assorted "never Trump" holdouts trying to upend his nomination. Although there's been talk in recent weeks of implementing new rules at the Republican convention in Cleveland that would allow party leaders to replace Trump - talk that I've entertained - the appetite for that sort of drastic measure is gone. House Speaker Paul D. Ryan, R-Wisconsin, and Senate Majority Leader Mitch McConnell, R-Kentucky, want no part of a coup, so there won't be one. Yes, party rules allow for last minute rules changes and tricky procedural maneuvers. But for Republicans to root for a coup at this point would be more than just futile, it could be completely self-defeating. No Ryan, no McConnell, no mutiny. Period.

Despite reservations, Ryan, McConnell and others have judged the cost of trying to make a change at the top of the GOP ticket to be higher than the cost of betting that Trump will ultimately see that his path to the White House is a return to big themes - not small arguments and inflammatory rhetoric. They understand that Republicans have to stick with Trump if they want to avoid capitulating to Clinton, who has demonstrated again and again that she is unfit to lead, and that at this stage, Trump alone can run successfully against her. If Ryan and McConnell have wagered wrong, we'll soon know. But events of the past few days suggest that they are right.

Clinton can't respond effectively to Trump's blunt assessment of terrorist threats because Americans know that her positions over the years - on Egypt, Iraq, Syria and especially Libya - have directly contributed to the dangers we face.

Trump is positioned to make the case that Clinton's cavalier approach to State Department email security has compromised her ability to combat terrorism, particularly if, according to new reports, she discussed sensitive operations, such as planned drone strikes, via non-secure communications. He is positioned to make the case that, according to former CIA deputy director Michael Morell, our adversaries' intelligence services could "have everything on any unclassified network that the government uses," including hers, meaning that anyone who sent her anything may have been compromised as well.

Trump will make sure that the Clintons' serial scandals: the Clinton foundation's questionable dealings, the appointment of an unqualified Clinton ally to the International Security Advisory Board and obscene multimillion-dollar payments made to former president Bill Clinton as "honorary chancellor" of for-profit Laureate International Universities, are never far from voters' minds. Add in the latest revelation of the Russians' hack of the Democratic National Committee's computers, and the public's concern over the former secretary's server skyrockets.

Trump alone can draw a real contrast with Clinton about what government will look like going forward. Either would bring in thousands of federal appointees. In his or her first weeks, the next president will nominate not just one Supreme Court justice to succeed Antonin Scalia but also dozens of vacancies on the federal bench. The new president brings a cabinet, military commanders and hundreds of appointees into a new administration. If he wins, Trump would have the opportunity to bring individuals, such New Jersey Gov. Chris Christie or Sen. Tom Cotton, R-Arkansas, along as vice president; former senator Jon Kyl as defense secretary; former U.N. ambassador John Bolton as secretary of state; or former senator Joe Lieberman to head the nation's top intelligence agencies - leaders who would swiftly and dramatically reverse our failing foreign policy.

Even those with less than complete faith in Trump have to think that a team like that would do more than any team Clinton could name to make an urgently needed course correction. And they should have faith a vote for him makes the country safer. If anyone doubts that, they should be reminded that several of her current and former staffers are, right now, caught up in the ongoing FBI investigation of her conduct of State Department business on a personal email account, using an unauthorized, at-home server, risking the spilling of classified information and opening up Clinton and her closest confidants to potential manipulation, or even blackmail, by foreign intelligence services.

The tragedy in Orlando shifted the nation's attention back to the enormous threat posed by radical Islam, and Trump demonstrated that unlike Clinton and Obama, he understands the magnitude of the crisis. What is happening in real time is a return, by Trump to a sharp focus on national security and immigration reform, a focus that brought him victory after victory in the fall. If he stays on those themes, and the ĂĽber-theme of shoving aside political correctness, Trump's appeal will steady and then climb. Why? Because Americans are tired of having a president who won't level with them about the so-called "jayvee team" that became a global threat.

Trump's task now is clear: It's time to abandon his off-the-cuff remarks, disengage from his battles with the media and methodically prosecute the case that throughout her career, Clinton has consistently displayed a disqualifying lack of judgment. He needs to develop this argument, detail it and drive it home.

Because ticket-splitting has dropped to all-time lows, the GOP can't afford to abandon a Trump candidacy. Without him, Republicans risk low voter turnout in November and losses in statehouses across the country - scuttling the chance to advance conservative priorities at the state level, regardless of what Trump does while in office.

No doubt, I've had a few collisions with Trump during this campaign season. But conservatives expect candor about the choice ahead of us, and the prospect of another President Clinton, especially a Clinton who is so mired in scandal, compromised on national security and is the author of so many foreign-policy meltdowns, has a way of concentrating the mind. For the good of the country, Republicans have to be clear about the binary choice in front of us, close ranks around Trump and encourage him to eschew the frivolous and move ahead with a serious message.

Two weeks ago, in her own national-security speech, Clinton said that the United States can't "roll the dice" when choosing our next commander in chief. She's right. But in this election, it's she who represents the dangerous choice, not Trump. As more Republicans, and all voters, recognize that risk, the more they will wholeheartedly back the one man who can beat her.