Our Biggest Problem Is A Lying, Stinking Media 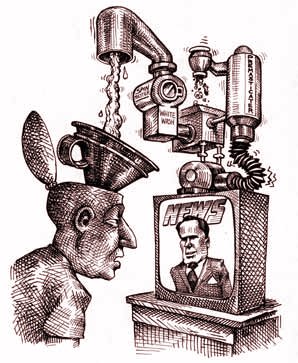 I'm pretty sure that many on the right think this column refers to the biased, criminal reporting by the media on racial issues. That disreputable corruption of journalism has led to widespread anarchy and violence around the entire nation by the mainstream media's blatant misreporting of facts since that Trayvon Martin/Zimmerman incident. But the truth is that the lies of the press are nothing new. It can be traced back to the 1930's with Stalin apologist Walter Durant's lies about the Soviet Union that won him a Pulitzer Prize. Yes, he was a New York Times correspondent, of course.

It has taken over seventy years for the Pulitzer Prize committee to review Durant's denial about the desperate condition of the Russian people under Stalin and to consider revoking that prize but why bother since that prize has been a joke for many years? The Pulitzer Prize was awarded to the Times-Picayune newspaper for totally fraudulent reporting of the Katrina disaster. Even though the salacious reports of gang-rapes and overflowing bodies was quickly debunked by eyewitnesses, there has been no retraction by the paper or review by Pulitzer committee. Blogger Nicholas Stix wrote a concise column about the deceit titled A Pulitzer Prize, Hurricane Katrina and Journalistic Fraud. Google it for specific details.

If there were once genuine investigative reporters in the mainstream media, there sure aren't any now. Most remember Carl Bernstein and Bob Woodward as those intrepid newshounds portrayed by Dustin Hofmann and Robert Redford in All the President's Men and since I did not appreciate Richard Nixon then, I admired these two. In retrospect, I regard their diligence as a result of their antipathy towards a Republican president that rarely reared it's head towards Jimmy Carter or Bill Clinton.

The media elites have perfected the modus operandi of targeting any who tried to expose the encroaching Marxism in the federal government and academia. Their successful demonization of Senator Joe McCarthy is a prime example of Nazi Joseph Goebbels' rule of propaganda; ""If you tell a lie big enough and keep repeating it, people will eventually come to believe it."

This why the MSM does whatever it can to keep the truth at bay. Even so-called impartial pundits like Fox News Bill O'Reilly continue to link Sen. McCarthy with the House Un-American Committee (HUAC) even though McCarthy was a senator. It is the MSM who ties McCarthy with what Joseph Welch said to him in the Army-McCarthy hearings in 1954 misquoting him as saying, "Have you no shame?" In actually he said. "Have you no sense of decency?" But what really angered Mr. Welch was McCarthy had the audacity to say: " But in view of Mr. Welch's request that the information be given once we know of anyone who might be performing any work for the Communist Party, I think we should tell him that he has in his law firm a young man named Fisher whom he recommended, incidentally, to do the work on this Committee, who has been, for a number of years, a member of an organization which is named, oh, years and years ago, as the legal bulwark of the Communist Party, an organization which always springs to the defense of anyone who dares to expose Communists."

In this case Joe McCarthy was the truth teller and had to be destroyed. So too, was Whittaker Chambers, editor of Time magazine, and a former communist spy who warned of the infiltration of communists in the Washington elite and one of the persons he named was Alger Hiss. He was involved in the establishment of the United Nations both as a U.S. State Department and U.N. official. In February 1945, as a member of the U.S. delegation headed by Stettinius, Hiss attended the Yalta Conference, where the Big Three, Franklin D. Roosevelt, Joseph Stalin, and Winston Churchill, The communist spy wasthis close to FDR at this important conference and no one bothered to vet him because the media was probably covering for him.

Just as in 1960, the MSM knew every little peccadillo that JFK was involved in and never told the public of his lascivious nature or his ill health. Considering the fact that it was such a tight race, JFK would never have received the support of the nuns in my school and the little old ladies who loved Jackie and thought JFK did too. Lies, all Lies. Would Nixon have sent us into Vietnam? Something to think about.

And the lies and the media fawning over a community organizer with no experience but with the right color skin has brought us to this chasm in our glorious history. We have become a nation too afraid to offend anybody especially those belonging to a religion that beheads innocents or flies planes into workplaces or belongs to a minority or a specific gender..

Do those low-info voters who only get their news from the alphabet networks, CNN, MSBNC even know that NBC edited the 911 call from Zimmerman so that it sounded like he had made a racist remark? It took forever for the press to show Trayvons' picture as an adult instead of a 12 year boy. President Obama jumped him calling Martin his would-be son because the networks called this a white on black shooting.

When Michael Brown was shot by a white cop in Ferguson, his friend lied that Brown had his hands up to surrender but forensic evidence proved otherwise. Nevertheless the media and dumb celebrities started promoting and wearing 'Hands up, don't shoot' t-shirts and every time, their pictures showed up all over the press. Riots followed and the town burned down. The mayor of Ferguson, James Knowles III told radio host John Catsimatidis, ""When this all started back in August…many of us who live here…noticed that there were a lot of people from outside," Knowles said. "Only a handful were even from Ferguson," he said. "And so we started asking the question: Where are these people coming from, and who's supporting this?" "And as the months have played out, we've seen that MoveOn.org, Organization of Black Struggle — national groups have openly and surreptitiously funded a lot of what's been going on," Knowles said. "The mainstream media continues mostly to ignore this fact."

We can expect a lot of misreporting, slander and downright lying in the next year as the race to 2016 heats up. The media will cover up the Democrat candidate's negatives and attack all the Republicans. After all, they managed to get Obama elected twice by fooling us once, then twice.

So are there any investigative reporters left? Yes, but they're not in the mainstream media. I found illuminating data about Ferguson, Baltimore and other hotspots around the country in reports by blogger Sundance writing for conservativetreehouse.org., an Andrew Breitbart inspired site.

While the MSM is following Goebel's propaganda rules, we must remember what he also said about the antidote:

The future of our country depends on the truth and it is nowhere to be seen in a lying, stinking media.