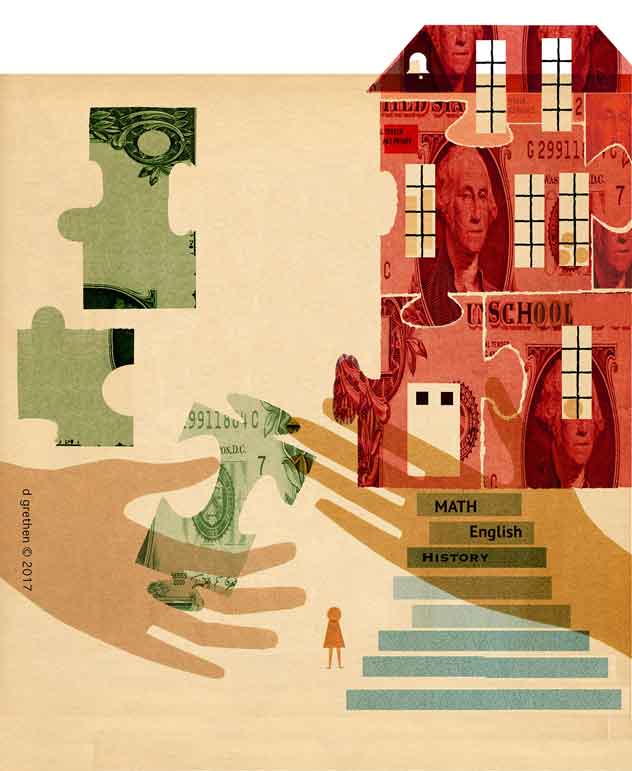 It's one of several examples of DeVos using the relief funding to advance her longtime goals, including taxpayer support for private and religious schools. On Thursday, she defended her controversial decision on how to distribute the federal money.

She also has used $180 million from the stimulus fund for a "microgrant" program for parents to pay for educational expenses, including private school tuition. Critics say they are akin to vouchers.

Earlier in the week, she said her goal was to advance her broader agenda.

In an interview with Cardinal Timothy Dolan, the archbishop of New York, on Sirius XM radio, Dolan asked DeVos if she was trying to "utilize this particular crisis to ensure that justice is finally done to our kids and the parents who choose to send them to faith-based schools."

"For more than three decades, that has been something I've been passionate about," she said. "This whole pandemic has brought into clear focus that everyone has been impacted and we shouldn't be thinking about students that are in public schools vs. private schools."

Congress allocated roughly $13.5 billion to K-12 schools as part of the Cares Act, a stimulus package meant to mitigate the economic damage from the coronavirus crisis. Most of the funding was to be distributed to elementary and secondary schools based on a formula driven by how many poor children they serve.

The formula has long allocated some funding for poor children attending private schools. But in guidance sent to the states, DeVos said states should use a calculation that takes into account the total number of students private schools serve, not just the number of poor students attending.

The result is that millions of dollars that would otherwise assist high-poverty schools in the Title 1 program will instead be shared with private schools, regardless of the economic needs of their families.

On Thursday, Sen. Lamar Alexander, R-Tenn., chairman of the Senate Education Committee and a DeVos ally, said her interpretation of the law is at odds with his own.

"My sense was that the money should have been distributed in the same way we distribute Title 1 money," he said. "I think that's what most of Congress was expecting."

Harsher words came Thursday from leading Democrats, who asked DeVos to immediately revise her guidance to conform with the law.

The guidance "seeks to repurpose hundreds-of-millions of taxpayer dollars intended for public school students to provide services for private school students, in contravention of both the plain reading of the statute and the intent of Congress," wrote Reps. Robert Scott, D-Va., chairman of the House education committee, and Rosa DeLauro, D-Conn., chairwoman of the House Appropriations subcommittee, as well as Sen. Patty Murray, D-Wash., the top Democrat on the Senate Education Committee.

They cited Louisiana as an example. The state will spend $23 million on students at private schools, they said, which is $14.4 million more than would be the case under the normal Title 1 formula.

The guidance holds considerable sway, but states are not required to follow it.

Subsequent legislation passed by the House would overturn the DeVos guidance, but that legislation is part of a large aid package whose prospects are unclear.


DeVos defended her reasoning in a question-and-answer session with reporters Thursday.

"It's our interpretation that [the funding] is meant literally for all students, and that includes students no matter where they're learning," she said.

She made her comments after an online discussion about remote education across the nation that featured officials with private companies, private schools and charter schools, as well as traditional public school leaders.

DeVos has long been a vocal supporter of school choice programs that allow tax dollars to follow children to private and religious schools. She argues that this gives parents more options, though critics say it drains public schools of badly needed resources.

She has made a range of controversial choices about how to allocate funding to aid higher education, including barring aid to undocumented students, which Democrats and other critics say was not Congress' intent. She also made funding available to some very small, private universities without demonstrated need.