Israel-bashers fail to see the Arab train leaving the station 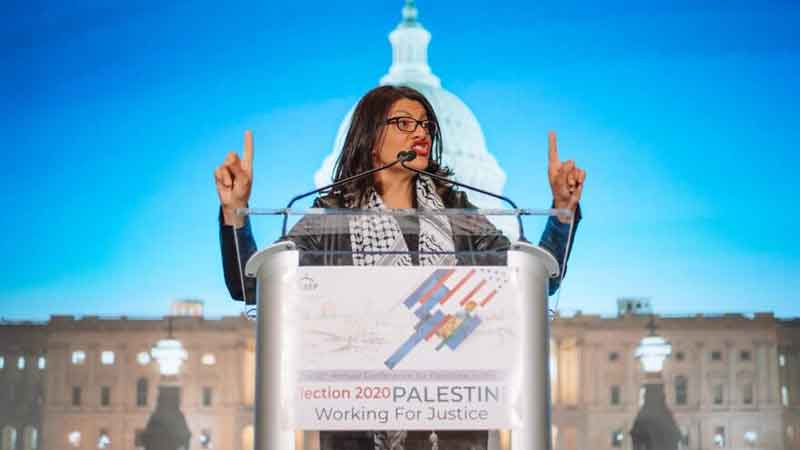 It's a busy time for Israel-haters. So what's new? Well, a lot.

Rep. Rashida Tlaib (D-Mich.), the Democratic congresswoman who has a lengthening record of lies about Israel, last week tweeted the boiler-plate falsehood that Israel's foundation in 1948 had entailed the "ethnic cleansing" of the Palestinian Arabs who were "indigenous" to the land.

The Jews, of course, are the only people for whom the land of Israel was ever their national home. And the Palestinian Arabs' displacement took place in the war of extermination against the nascent State of Israel, waged by Arab states who told them to leave on the basis that they would return as conquerors.

Yet Tlaib's ahistorical rubbish is standard discourse among Western Israel-bashers. In Britain, more than 130 MPs have signed a letter drafted by the Council for Arab-British Understanding calling for sanctions against Israel if it proceeds with its proposal to extend Israeli law over parts of the disputed territories.

Their claim that this "annexation" is contrary to international law is also demonstrably untrue. It would actually belatedly enforce international law, by restoring the legal right to settle these territories that in the 1920s the international community gave to the Jews alone.

Nevertheless, the European Union (with objections from Hungary and Austria) has repeatedly condemned Israel for the plan. The British government has denounced it. Liberal American Jews fulminate against it.

The presumptive Democratic presidential nominee Joe Biden says he would "reverse" U.S. President Donald Trump's Israel policies that he claims damage the chances of a peace agreement, while hedging this with enough caveats to render deniable his hostility to Israel's best interests.

At the same time, the man they all refuse to condemn for his record of supporting terrorism, inciting mass murder and breaking his undertakings — Palestinian Authority leader Mahmoud Abbas — declared that the Palestine Liberation Organization was now absolved of all its agreements with Israel and the U.S. over the proposed "annexation."

Even his followers realized the absurdity of this latest such empty bombast. An exasperated P.A. official said: "How many times can you repeat the same threat? How can you renounce the same agreements you said you renounced five years ago?"

Meanwhile, undetected by the Israel-bashing West, the train is in fact leaving the station. Recently, Palestinian Arab leaders met the head of the Samaria Regional Council, Yossi Dagan, to discuss Trump's Middle East "deal of the century," and Israeli sovereignty over Judea and Samaria.

Among participants were Sheikh Abu Khalil Tamimi of Ramallah, Mohammed Massad of Jenin and Israeli-Arab activist Sara Zoabi, as well as other leaders who hid their identities in fear for their lives.

"We want to get ready for the regional changes, to concentrate on economic cooperation," said Sheikh Tamimi. "Also with the settlers, led by Yossi Dagan, we need to think together what our common future will look like."

Muhammad Massad, head of the Palestinian Workers' Union, said: "If the Israeli worker and the Palestinian worker work together caring for each other, together in joy and together in difficult moments, then our children will be ashamed of the fight. Peace negotiations will not be necessary because there is peace."

And said Sara Zoabi: "I think the deal of the century is the right thing for Arabs and Israelis. I know that a large percentage of Palestinians are interested in the program and applying sovereignty, and even pray for it."

Such positivity was echoed in a video meeting this week between Israel's President Reuven Rivlin and the heads of 130 companies participating in the Collective Impact Partnership for Arab Employment, which seeks improvements in the employment of Arabs in Israel's largest companies.

Its co-chairman, Dr. Sameer Kassem, said early fears that Arab society would be disproportionately hit by the COVID-19 virus had not been realized. "In the last few days, we have seen the strength of Israeli society, our society, that has taken care of its workers — Jews and Arabs alike."

Even more significant is the train gathering steam in the Sunni Muslim world over the Palestinian Arab issue.

Two recent TV drama series broadcast by the Dubai-based Saudi MBC, "Umm Haroun" and "Exit 7," have been at least reasonably sympathetic to the Jewish people and Israel while criticizing the Palestinians.

"Umm Haroun" covers the establishment of the State of Israel, depicted as a monumental event that disrupts the harmony between Muslims and Jews and leads to the murder of a Jewish resident. The main character in "Exit 7" says he does business with Israel because it is not really an enemy. Hinting at the Palestinians, he says the real enemy is "someone who doesn't appreciate you."

These shows, which have provoked an uproar, are trial balloons designed to test public opinion over normalizing relations with Israel.

In a similar vein, Saudi writer Abdulhamed al Ghobain, a political activist who reportedly shares the viewpoint of the reformist Saudi Crown Prince Mohammed bin Salman, told BBC Arabic TV: "There is a deluge of opinions against the Palestinian cause. . . . Unfortunately, the Palestinians have lost. The Palestinians have not contributed anything. We can say that they are emotional people whose behavior is governed by their feelings . . .

"People say out in the open that they do not care about the Palestinian cause and about the Arabs in general, and that we must steer our relations in keeping with our interests. Israel is an advanced country and we can benefit from it. We should deal with reality. The relations with Israel have become warm. It is no longer just about normalization."

Earlier this week, news broke that an Etihad Airways plane on a direct flight from Dubai landed in Tel Aviv to deliver a consignment of virus aid to the Palestinians. This was the first known direct commercial flight between Israel and the United Arab Emirates.


Tellingly, this further move towards normalization was rejected by the P.A., which refused to accept the aid. "If the UAE wants to normalize with Israel, then it shouldn't be on our backs," a Palestinian source told Kan News.

So implacable is their hatred of Israel that they are prepared to sacrifice their own people's health. And they remain blind to the reality that the Etihad flight and all the other Gulf state trial balloons are so clearly signaling — that the Arab world will no longer support them.

Of course, this progress towards sanity should not be exaggerated. The Gulf states have a tactical interest in normalization because they need Israel and America in their struggle against Iran. And the Arab and Muslim world still heaves with anti-Jewish and anti-Israel feeling. Recent polling suggests that a large majority of Palestinian Arabs in Gaza and a small majority in the disputed territories support a new terror campaign against Israel.

Nevertheless, the moves towards normalization with Israel are immensely significant. For decades, the Arab world has used the Palestinian cause to protect its ruling elites from the anger of its people. Now it sees that its interests actually lie elsewhere, the Palestinians have become disposable. Their only supporters now are Iran and the useful idiots of the West.

Mahmoud Abbas and his P.A. continue to pretend to themselves that they haven't lost, but are instead on the path to victory. A steadily increasing number of Arabs, including Palestinians, no longer want to be losers. Western liberals, however, don't even understand that's what they themselves have become.

For more than three decades, long-time JWR contributor Melanie Phillips has served as Britain's political conscience. A journalist and author, in 1996, she was awarded the prestigious Orwell Prize for journalism. This first appeared on Jewish News Syndicate.