In Front of a Philadelphia Abortion Clinic, Democratic Lawmaker Shows Us the Darkness of the Cultural Divide 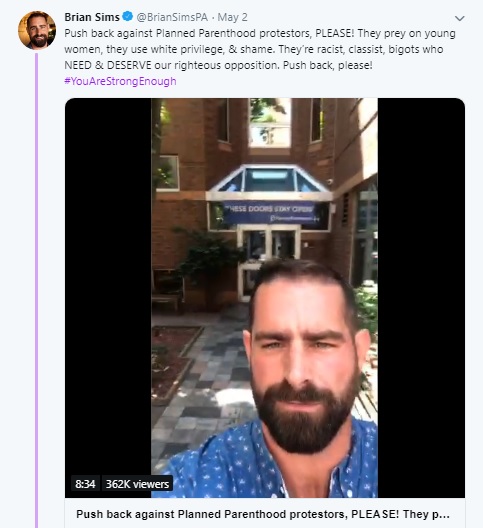 PHILADELPHIA — When Brian Sims first ran for state representative in 2012, he ran as a new pro-business voice. He was going to be a bridge builder, brimming with common-sense ideas on pocketbook issues.

He never met that promise.

Instead, he became many other things: an outdoor adventurer who climbed Mt. Kilimanjaro; a partisan attack dog who accused fellow state Rep. Martina White of saying she wanted to deport all immigrants, something his staff had to admit she never said; and a celebrity activist whose lucrative, nationwide speaking circuit earned him an ethics investigation.

He also became the guy who tweeted a photo of himself wearing a suit and a smirk and raising his middle finger to Vice President Mike Pence.

Sims captioned the photo saying: "(L)et me be the first to officially welcome you to the City of Brotherly Love and my District! We're a City of soaring diversity. We believe in the power of all people. Black, Brown, Queer, Trans, Atheist, & Immigrant. So ... get bent, then get out!"


Last week, Sims decided to film his own harassment of a woman outside an abortion clinic here in Philadelphia, calling her an "old white lady" and her beliefs "grotesque" to her face and to the camera. The clear plan was to incite his audience against this peaceful protester, whom he saw as clearly bigoted and evil.

For Twitter observers, the whole act opened the window into a dark, dark place in American culture, a gaping divide none of us quite know how to navigate.

And while Sims' harassment was, on the one hand, shocking, it was expected. A politician abusing his power thusly to crush religious conservatives is exactly what so many of us have been bracing for.

This was no outburst in the heat of a debate. He wasn't reacting to a stressful situation. It also wasn't a talk-show appearance that went sour, nor was it a barroom brawl. He wasn't caught off guard at his home or his office or a campaign event.

This was an emboldened, out-of-touch, arrogant elected official who woke up one day last week and made a conscious decision to go to Planned Parenthood for the express purpose of fighting and badgering.

And he chose a woman standing by herself. And he didn't start a dialogue. He didn't introduce himself. He badgered her. Repeatedly. Relentlessly. Angrily. He badgered an enemy he himself described as an old lady.

Then he badgered women younger than he, asking his Twitter following to identify them and expose them for the crime of being anti-abortion.

Sims not only chose to do this; he did this with malice aforethought.

And how do we know that? Because he himself filmed it. This wasn't caught on film by an anti-abortion activist or passerby. Sims filmed it all on purpose. Then, having done these things, having behaved this way and presumably, viewed this film, he released it with great fanfare, regaled himself for what he had done and asked people to send money to, in essence, support their shared views, values and cause.

We must reflect on this. This is the extreme left acting out in public in exactly the manner they ascribe to conservatives: confrontational, intimidating, with police tactics, berating women, threatening the First Amendment.

This stunning behavior — premeditated, confrontational, abusive of the power of office, targeted toward women, contrived to gain political benefit — occurred and has not been criticized by anyone on the left. No elected Democrat has come out and condemned Sims publicly.

This is not about anti-abortion and pro-abortion. This is about behavior that is so out of step, so out of line, so shocking to most of America but is allowed to occur without a word of disapproval from half the country.