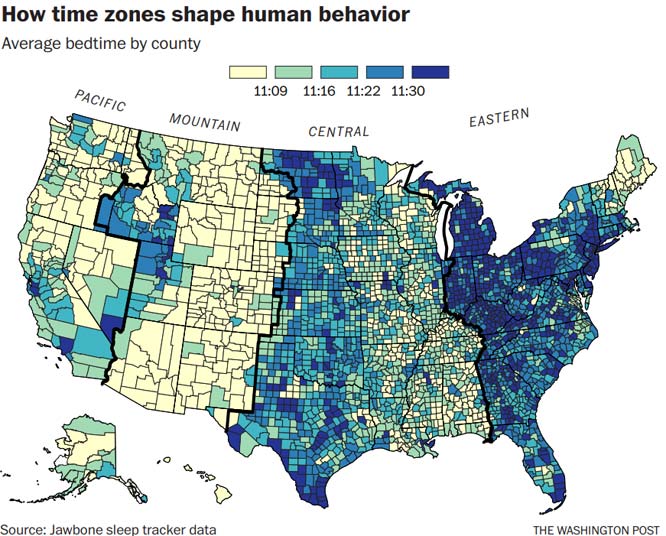 Sleep scientist Matthew Walker has observed that "human beings are the only species that deliberately deprive themselves of sleep for no apparent gain." We stay up late to watch our favorite TV shows. We wake up early to get to work or school on time. And twice a year we change our clocks, to the bewilderment of our circadian rhythms.

We also set up conflicts between our natural and social clocks in other, less obvious ways, a fact underscored in research published this month in the Journal of Health Economics. It turns out, the study found, that living on the wrong side of a time zone's boundary can have negative consequences on a person's health and wallet.

The culprit? More natural light in the evening hours.

Panama City, Florida, for instance, is located on the far eastern end of the Central time zone, while Pecos, Texas, sits on the far western side. This week, the sun set in Panama City about 7:12 p.m. Central time. In Pecos, it set more than an hour later, at 8:25 p.m.

Sunset is a powerful biological trigger: The fading of natural light causes the body to release melatonin, a hormone which induces drowsiness. As a result, people on the eastern side of a time zone, where the sun sets earlier, tend to go to bed earlier than those on the western side. The data below, derived from about 1 million users of the now-defunct sleep tracker Jawbone, illustrates this point, showing how bedtimes shift from east to west, with a sharp reset happening once you cross into a new time zone.

Giuntella and Mazzonna wanted to know how changes in bedtimes might affect a person's physical and economic well-being, so they conducted some tests.

Data from the American Time Use Survey by the Bureau of Labor Statistics, in which respondents keep detailed diaries of how they spend their days, confirms what the Jawbone data suggest: Those who live in the geographical area of a time zone with a later sunset went to bed, on average, 19 minutes later than people who live with earlier sunsets.

The problem for folks who go to bed later is that they generally cannot make up lost sleep on the back end: Work and school have set start times, whether you live in Pecos or Panama City.

Roughly speaking, 19 minutes of lost sleep a day translates to 115 hours of lost sleep per year. Given what's known about the importance of sleep for good physical and mental health, it's no surprise that Giuntella and Mazzonna found a greater incidence of health problems in areas where the sun sets later.

People on the late side of sunset across U.S. time zones were 11 percent more likely, on average, to be overweight and 21 percent more likely to be obese. Diabetes was more prevalent, and the risk of heart attack increased by 19 percent. Breast cancer rates were slightly elevated, too - about 5 percent higher than average.

The authors also found economic differences. Sleeping less is known to adversely affect productivity. As a result, the researchers found, "wages tend to be 3 percent lower on the late sunset side of the time zone border, suggesting negative effects on economic productivity."

Economic data suggests people don't put much of a price tag on living on one side of a time zone or the other. Housing prices and commuting times are comparable, for example.

But it's not all bad for the late folks. Giuntella and Mazzonna speculate later sunset times may pay for themselves in terms of the enjoyment people get out of them. "Individuals may derive more utility from enjoying leisure time with more natural light in the evening," they write. In other words, an extra hour of daylight for recreation may at least partially offset the loss of sleep.

"As long work hours, work schedules, school start times and the timing of TV shows can create conflicts between our biological rhythms and social timing, our findings suggest that reshaping social schedules in ways that promote sleeping may have non-trivial effects on health and economic performance," the researchers wrote.