The outsize influence of cable news 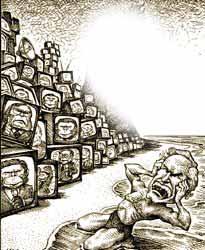 With their limited, aging viewership, you might think cable TV news would be a political afterthought and a business washout.

Instead, revenue is astronomical - $5 billion in 2017, according to Pew Research, for the big three: Fox News, CNN and MSNBC.

And the cable networks, undeniably, develop the kind of engagement that marketers call "mindshare" - especially in the political realm.

"Cable TV news has an influence today that is outsized to the literal audience that is watching it," said Tom Rosenstiel, executive director of the American Press Institute.

They often spawn political controversy or are at the center of things themselves: whether Democratic presidential candidates go on Fox News town halls, the fallout of a CNN reporter having his press pass revoked, and MSNBC's months-long obsession with the Mueller report.

All of this despite the fact that their actual audience is relatively small and quite old - the typical Fox News and MSNBC prime-time viewer is 66, with CNN's somewhat younger.

And viewership is a fraction of the audience still flocking to the three nightly news half hours on CBS, NBC and ABC: There are more than 9 million viewers for David Muir's top-rated ABC show, "World News Tonight," compared with cable's top-rated competitors, Sean Hannity and Rachel Maddow, who each draw about a third of that number.

Nor is it at technology's cutting edge. By the end of this year, mobile devices will surpass television as the medium attracting the most viewership, according to eMarketer research. So why do they loom so large?

First: the watcher in chief, President Donald Trump, whose feedback loop with Fox and whose bashing of its cable rivals is well documented. Cable news has an immediate and direct effect on the president of the United States, and everyone knows it. That gives it enormous power. Another element is that when politicians or pundits make news - or commit gaffes - it's often cable that captures these moments first.

"Cable can bring a second-screen virality - it's an incubator for moments that go viral" on social media, said Peter Hamby, a former CNN political correspondent who left the network to develop news content for Snapchat. His vastly younger audience, he told me, has little awareness of cable TV news shows and personalities.

Controversy sells: CNN just expanded its partnership with Twitter, giving advertisers "the opportunity to buy ads around the most buzzworthy Twitter videos from CNN," Axios reported, "like a hot one-liner from a presidential debate or a dramatic moment during an exclusive interview."

As for scoring political points, candidates need face time on every screen and medium available, and the way information flows today, cable TV can be an entry point for coverage that spreads far and wide.

Who's that guy who is running for Senate, a voter may think? Oh, he's the one that's always on TV. (Recall the advice offered decades ago by author/provocateur Gore Vidal: "Never turn down a chance to have sex or go on television.")

What's more, true audience size is hard to pin down.


"Airports and doctor's offices and bars have Fox on all the time - there's a multiplier effect," said journalist and author Anne Nelson, whose upcoming book, "Shadow Network: Media, Money and the Secret Hub of the Radical Right," examines the profound influence of right-wing media in United States' "news deserts," where traditional news sources have disappeared.

"All of the numbers are soft," Nelson told me. "How would you even really measure that?"

And while cable's older viewers may not be the preferred "demo" for advertisers, in TV parlance, they matter as primary elections approach. It's older, politically engaged people who are most likely to vote in primaries, after all.

Previously:
• 03/18/19: Social-media platforms were used like lethal weapons in New Zealand --- that must change now
• 01/08/19: Campaign journalism needs an overhaul. Here's one radical idea
• 10/07/18: Nate Silver will make one firm prediction about the midterms, but most journalists won't want to hear it
• 09/07/18: A messy journalistic dilemma if New York Times reporters find out the identity of anonymous op-ed author
• 07/23/18: Mark Zuckerberg is a horror show, but there's a glimmer of truth hidden in his latest blunder
• 06/11/18: Shocked by Trump aggression against reporters and sources? The blueprint was made by Obama
• 05/14/18: Symptoms at NBC hint at a larger sickness
• 10/18/17: From the pen of an 18-year-old Harvey Weinstein: An aggressor who won't be refused
• 01/12/17: BuzzFeed crossed the line in publishing salacious 'dossier' on Trump
• 11/09/16: The media didn't want to believe Trump could win. So they looked the other way
• 11/02/16: Nate Silver blew it when he missed Trump --- now he really needs to get it right
• 10/20/16: How the Committee to Protect Journalists broke its own rule to protest Trump