Biden: The end of the beginning 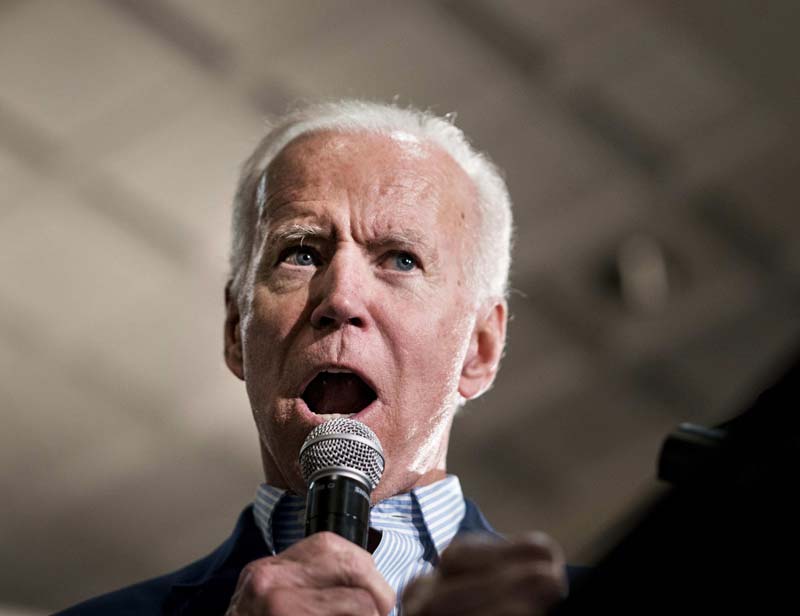 The location in Philadelphia was heavy with symbolism. "So why do we begin this journey in this place - Philadelphia? Because this was the birthplace of our democracy. It was here that two of the most important documents in the world's history were written," he began. It's also in a critical state Biden almost certainly needs to win in order to get to 270 electoral votes. He has chosen to plant his headquarters in Philadelphia as well.

Despite the picturesque setting near the steps of the Philadelphia Museum of Art, the same steps Sylvester Stallone climbed as Rocky, Biden chose the backdrop of the Benjamin Franklin Parkway, with William Penn's statue perched on top of City Hall. An enthusiastic crowd, which a Biden security official pegged at 6,000 (although the city refrains from estimating crowd size), was tightly packed in risers and a fenced space close to the stage.

This was not meant to compete with the 20,000-strong throng that showed up for Sen. Kamala Harris' kickoff in Oakland, California. The press was strategically situated out of easy reach of voters. Biden knows that the vast number of voters never see in person, let alone meet, presidential candidates. They view the campaign like a movie or TV show about a campaign. This was a classic made-for-TV event.

A slick film with Jill Biden kicked off the event, and then she appeared onstage to raucous cheers. She stressed her Philly roots, in case anyone missed that Pennsylvania is a critical swing state. Joe Biden bounded onto the stage - in case anyone was skeptical about his fitness - and immediately peeled off his sport coat. He promised no one would work harder.

Biden unabashedly stressed unity throughout the speech, contrasting President Donald Trump's attempt to divide America with his own desire to unify the country. This was a sunny but tenacious Biden. "Some say Democrats don't want to hear about unity. That they are angry - and the angrier you are, the better," Biden said. "That's what they are saying you have to do to win the Democratic nomination." He declared, "Well, I don't believe it. I believe Democrats want to unify this nation. That's what we've always been about. Unity."

He painted Trump as a threat to the nation and to democracy. "The threat is real," he said, ticking off Trump's attacks on the press, courts and Congress; about the last, he added "without a whimper from Republicans in Congress who know better." He contrasted Trump's actions (e.g., child separation, moral equivalence between neo-Nazis and protesters) with what Americans believe. He asked the crowd whether they believed in Trump's actions. The crowd roared " No!" Biden responded, "No we don't, but Trump does!"

Using the Gettysburg Address, he said the question was now whether this generation would let a "government of, by and for the people perish from the world." "Not on my watch! Not on your watch!"

That sentiment sits well with a gay, middle-aged couple from Philadelphia. "We need someone to get rid of the current president," says Larry Kincus. Is America ready for a gay president? "No way," says Peter Simpkins. "I don't think it's ready for a woman president, either." Their neighbor, who declined to give her name, chimed in, "I like his message. He appeals most broadly to Democrats, independents and Republicans.

For some in the crowd, a good deal of Biden's appeal is intensely personal. Voters like him, a lot. Barbara from Kentucky, visiting her daughter Samantha who now lives in Philadelphia, is a dyed-in-the-wool fan. "I respect Joe Biden. I think he's a good politician. This is the first I feel this way about a candidate." Her daughter Samantha is still surveying the Democratic field. For her, health care and women's rights top the list of issues. "[Trump] makes me cringe," she says. "The tweets are a big deal with me." Barbara interjects, "I'm a grandmother with five grandsons." She says she's "very disappointed with the current president" as a role model for her grandsons.

Morgan Rocco, 25, a University of Delaware alumna who now lives in Philadelphia, says, "He went to Delaware, I went to Delaware." She likes "how progressive he is," but it's Biden himself who's the draw. "We just love him," she enthuses.

With front-runner status comes intense media focus and a gantlet of debates with lesser-known candidates ready to take their shot. Biden's biggest challenge may be to maintain discipline and focus and avoid providing opponents, including Trump, with ammunition. Trump has littered his presidency with gaffes, inanities and lies; the standard for Democratic candidates is inarguably higher - and for a former vice president and a front-runner, even higher. His recent aside that China wasn't really "competition" (meant as a put-down, a reaffirmation that the U.S. economy is second to none), was immediately seized upon as evidence of his supposed cluelessness about China.

Biden will also need to confront the media narrative that he's somewhat to the right of the base. As we've written many times, the actual Democratic electorate is far more moderate than progressive activists and their Twitter chorus would have you believe.

Biden stressed his devotion to fighting climate change, making clear the threat has to be addressed "now." He joked that at the top of his climate change proposal would be "Beat Donald Trump." It was among his biggest applause lines. Although his opponents have been trying to paint his not-yet-released green-energy plan as too moderate, Biden senior adviser Symone Sanders stresses that he never said on climate change that he was going "to take the middle ground."

The Biden team rejects the notion that he is out of step with the base. "The broad base of the party would like us to win," Sanders said. "The base is united on that." She cautions that he has yet to roll out a series of polices.

Health care will certainly be among them. Biden claimed joint ownership of the Affordable Care Act and argued that we don't need to "start over." He signaled support for a public option for Medicare.

In short, Biden is betting that the desperation to kick Trump out of the White House, his personal connection with voters and his perceived electability will lift him to the nomination. He's going to continue to remind voters how horrible the incumbent president is - an implicit affirmation that the most important consideration for voters is booting him out.

Perhaps his campaign slogan should be: Win, baby, just win.