In this wildly popular game, you kill a journalist: 'Make him famous in a different way' 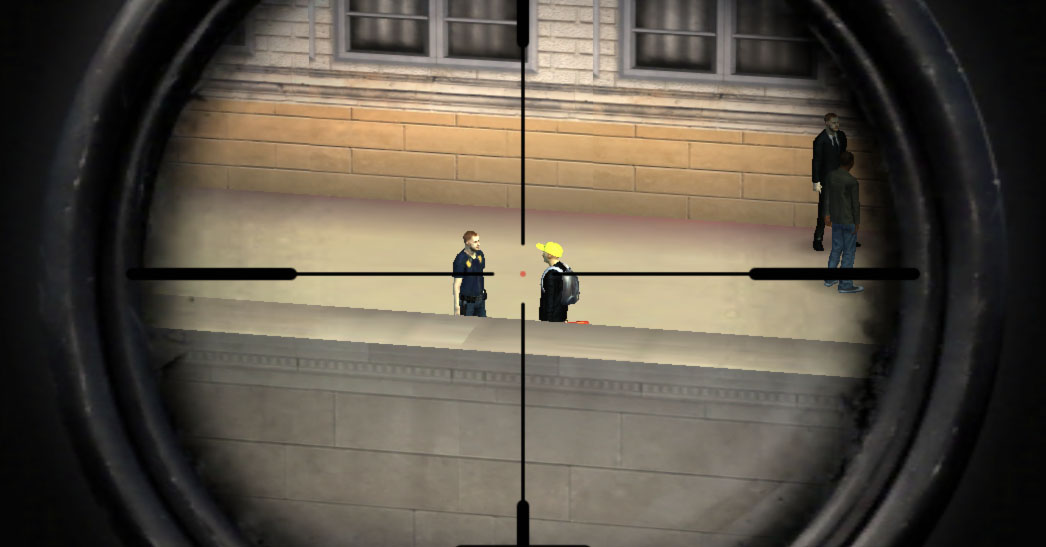 The mobile game "Sniper 3D Assassin," showing the "Breaking News" mission, in which the player is told to kill a journalist who "bribed a cop and will pick up a briefcase from the cop." Angela Fritz/Sniper 3D Assassin

The mission is called "Breaking News." It's the seventh mission in the game, and it comes after you've upgraded your sniper rifle to shoot at a distance of nearly 1,000 feet with accuracy.

By now, you've already taken out, among others, a gunman who allegedly killed several people at a pizzeria last year, someone who stole a backpack from a tourist, a sniper who (without a trace of irony) is killing innocent people, and three men who were guarding a gang's weapon arsenal.

"Breaking News" has a clear goal: kill a reporter.

"A journalist bribed a cop and will pick up a briefcase from the cop," the mission says. "The briefcase is full of sensitive documents. Make him famous in a different way." (In reality, journalists don't pay sources for information or material. There would certainly be no bribing.)

"Sniper 3D Assassin" is a mobile game on iOS and Android. It has a rating of about 4Â˝ stars, with a combined 12 million reviews on both platforms. The app launched in 2014 and reached 10 million downloads in the first month, according to the developer, TFG Co., which is based in Brazil. In 2016, the developer claims it was the most-downloaded game in the App Store.

"Take your sniper, aim and start shooting your enemies," the game description reads.

New York Times editor Jamal Jordan shared an image of the game on Twitter and said his nephew invited him to play. "My nephew is 10, and we had a very long talk after," Jordan told HuffPost.

The Apple Store has guidelines that address violence in games, and it notes that "if you're looking to shock and offend people, the App Store isn't the right place for your app."

Specifically, the guidelines say "apps should not include content that is offensive, insensitive, upsetting, intended to disgust, or in exceptionally poor taste." As examples, the guidelines cite "realistic portrayals of people or animals being killed, maimed, tortured, or abused, or content that encourages violence. 'Enemies' within the context of a game cannot solely target a specific race, culture, real government, corporation, or any other real entity."

Neither Apple nor Google responded to email inquiries. TFG Co., did not immediately respond to an email inquiry.

Attacks and threats against journalists have skyrocketed since 2017, when Donald Trump became president. Trump has continued to call journalists "the enemy of the people," despite criticism and fear that he is stoking tension and violence.

On June 28, man shot multiple journalists at the Capital Gazette in Annapolis, Maryland. Five people died and two were injured. Before the shooting, the alleged killer had sent letters to courthouses and a law firm stating: "I further certify I then did proceed to the office of respondent Capital-Gazette Communications ... with the objective of killing every person present," according to the Baltimore Sun.

In October, a pipe bomb was found in the CNN mailroom at the Time Warner Center in New York. The package was addressed to former CIA director John Brennan, who works as an analyst for NBC News and MSNBC.

Charging documents included details suggesting that the suspect was critical of the media. The suspect's van was "covered with images including images critical of CNN," the complaint said.

Trump later told reporters that he didn't think he was responsible in any way for stoking the suspect's rage at the news media. "No, not at all," Trump said. He then attacked CNN on Twitter for suggesting that he was inciting violence against journalists.

The same month, Washington Post contributor Jamal Khashoggi was killed by Saudi government agents. The Post later confirmed that the CIA determined Saudi Crown Prince Mohammed bin Salman had personally ordered the killing. Trump has denied the intelligence, despite having been shown evidence. Jared Kushner, the president's son-in-law and senior adviser, "enjoys a close relationship" with the crown prince.