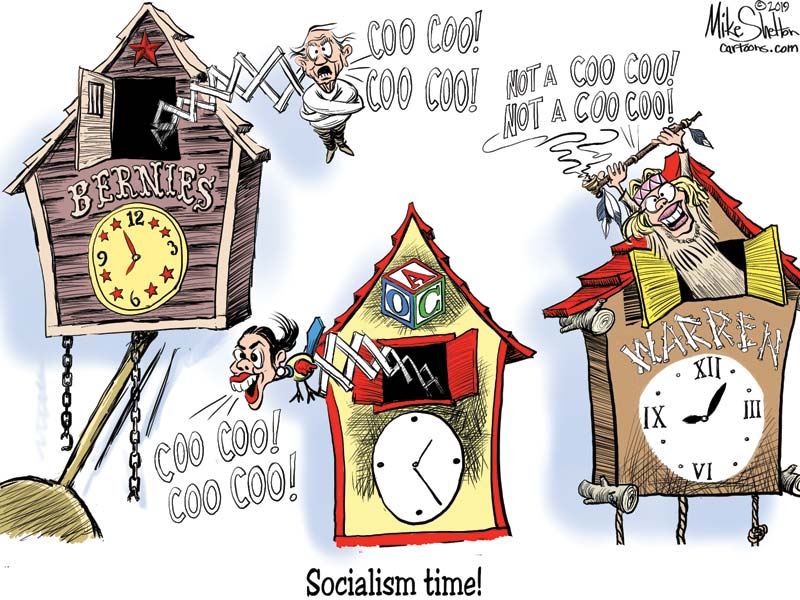 As we are now in the early stages of the presidential sweepstakes, it seems beyond doubt that President Donald Trump — notwithstanding his shaky approval ratings — will emerge as the Republican standard bearer in the 2020 election. On the Democratic side, the polls give this surprising message: The entry of Joe Biden into the campaign has turned things around overnight.

Even though former President Barack Obama — rumored to support Kamala Harris — has not uttered a syllable on behalf of his former vice president, all major polls put Biden ahead of Bernie Sanders by margins that run between 8 and 32 points with an average margin of 23 points. None of the next four candidates — Harris, Elizabeth Warren, Pete Buttigieg and Beto O’Rourke — cracks 10 percent. In effect, the race looks over before the first primary ballot is cast.

The results are not all that surprising. Joe Biden is seen as a stand-up guy. He not only spurns the outlandish proposals of his rivals, but he also understands the bread-and-butter economic issues that the more ferocious wing of the Democratic Party ignores. So here is the great disconnect. The runners-up in the presidential derby are the dominant voices shaping popular impressions of the Democratic Party. It is not just that they want to get rid of Trump by impeachment, if necessary. It is also that they want to put into place a set of untested, but grandiose entitlements and social reforms.

Alexandria Ocasio-Cortez has a Green New Deal. Warren offers plans that would allow the government to take over the boards of corporations with more than a billion dollars in assets, coupled with an annual wealth tax on large holdings in good years and bad. Bernie Sanders has a program of “Medicare for All,” with the catch that it abolishes the private delivery of health care that more than 180 million Americans depend on for services. He tops that off with a promise for free college. The entire Democratic House appears to support the misnamed Equality Act, in which self-selected gender identity trumps traditional biological sex markers in everything from bathrooms to athletic contests. Any one of these proposals will break the bank, upend traditional social arrangements or both. Taken in combination, the nervous remarks on how the new American socialists will make this country look like Cuba or Venezuela really start to hit home.


So just how did Democrats get into this untenable state? Here are three factors.

First, they so resent Donald Trump. The Democratic left sees him as vulgar, fraudulent, jingoistic and bigoted. So they find it galling that the stock market has moved forward and the tight labor market has driven up wages, especially for minority youth, ex-cons and individuals with, at most, high school educations.

Second, they still bristle at the nasty way a corrupt and inept Hillary Clinton strong-armed Bernie Sanders out of the nomination in 2016. Even though she ran to the left of Barack Obama, her ties to Goldman Sachs and her unwillingness to match Sanders program for program led them to rally around his progressive/socialist banner. It does not help that AOC — already a household set of initials — proudly flaunts the socialist label in a way that makes House Speaker Nancy Pelosi wince.

Finally, never underestimate the corrosive effects that identity politics, often with a strong anti-Semitic strain, exerts on elite academic institutions where Republicans are a near-extinct species in the humanities, social sciences and law.

It may be that a socialist program of an endless cornucopia of free goods and social transformation plays well on liberal university campuses and in old-line publications such as The New York Times and The New Yorker. But will it play well anywhere else? Judging from the Biden surge, it seems as if it will not.

Biden and Pelosi represent the conservative wing of the Democratic Party, and both seem to know that if they get drawn into the maelstrom, the party will carry at most the vocal bicoastal states. Which raises these three prospects: a virtual certainty that the Republicans will retain control over the Senate; a better-than-even chance that Trump will get re-elected by a combination of core supporters and a large group of pragmatic voters who, in light of the general good economic news, regard him as both a known quantity and the lesser evil; and third, a respectable chance for the Republicans to retake the House of Representatives, especially if the hotheads in the Democratic caucus force Pelosi’s hand on the Trump impeachment.

Biden can help avoid these results, but, rest assured, the left won’t surrender without a fight. Instead they will make him run against his own political past. A belated apology to Anita Hill won’t cut it with those who thought they could block the appointment of Clarence Thomas to the Supreme Court. And a facetious, spiffy joebiden.info website graced by a smiling picture of Uncle Joe really wants you to think of him as Uncle Joe Stalin: Take note of his long list of mock achievements stretching back close to 40 years: AGAINST Gay Marriage (1996); FOR Mass Incarceration (1994); AGAINST Abortion Rights (1982); AGAINST School Busing (1970s); FOR Iraq War (2003); FOR Death Penalty and Harsh Drug Sentences (1986, 1988).

The modern American left is long on bitterness and contempt, but short on compassion and forgiveness. One supposed sin cannot be erased by years of admitted good deeds. The great Kate Smith, whose rendition of “God Bless America” rallied Americans in the dark days of World War II, had her statute unceremoniously removed by the Philadelphia Flyers and the New York Yankees for her 1931 rendition of “That’s Why Darkies Were Born,” even though the great black singer and activist, Paul Robeson, covered the song as well. These are the folks who will come gunning for Joe Biden. I don’t think that they are strong enough to stop his nomination. But they could cripple him for the general election by exerting enormous influence in the overheated precincts of the Democratic Party.

Joe Biden deserves better—and so do the American people.