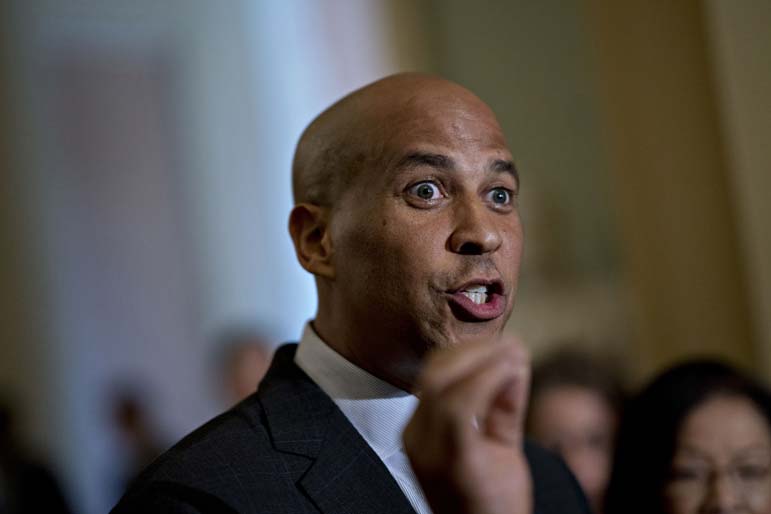 Sen. Cory Booker, a Democratic presidential candidate, struck a more cautious note than one of his rivals on Sunday when asked about whether the federal government should break up major companies such as Facebook.

"I don't care if it's Facebook, the pharma industry, even the agricultural industry. We've had a problem in America with corporate consolidation that is having really ill effects," Booker said on ABC News' "This Week" with George Stephanopoulos.

But, Booker added, "I don't think that a president should be running around pointing at companies and saying breaking them up without any kind of process here. It's not me and my own personal opinion about going after folks. That sounds more like a Donald Trump thing to say - 'I'm going to break up you guys.' "

Booker, N.J., insisted his comments were not meant as criticism of Sen. Elizabeth Warren, D-Mass., another Democratic presidential contender, who has called for major tech companies that have grown with mergers, such as Facebook, Amazon and Googl

e, to be unraveled with stricter regulations. "She is my friend," Booker said. "Let her discuss and debate her positions."

Still, he said that rather than call for companies to be broken up with a sweeping policy proposal, like Warren offered in March, he would encourage the Justice Department to take the lead and use "antitrust legislation to do the proper investigations and to hold industries accountable for corporate consolidation."

Meanwhile, Sen. Kamala D. Harris, D-Calif., who is also running for president, told CNN's "State of the Union" on Sunday that it is time to "seriously take a look" at breaking up Facebook, underscoring how the 2020 Democratic field is grappling with this debate.

"There's no question in my mind that there needs to be serious regulation and that has not been happening," Harris said. "It is essentially a utility that has gone unregulated. As far as I'm concerned, that's got to stop."

Booker's remarks came days after Facebook co-founder Chris Hughes wrote in a New York Times opinion piece that Facebook chief executive and co-founder Mark Zuckerberg has enabled the company to grow into a monopoly and sacrificed "security and civility for clicks."

"Today's big tech companies have too much power-over our economy, our society, & our democracy," she wrote Thursday. "They've bulldozed competition, used our private info for profit, hurt small businesses & stifled innovation. It's time to #BreakUpBigTech."

While Booker is liberal, he has established a reputation in the Senate, and during his time as Newark's mayor, as a business-friendly Democrat who engages with tech leaders and woos them to invest in New Jersey, including Zuckerberg.