The Truth about Trump's Economy 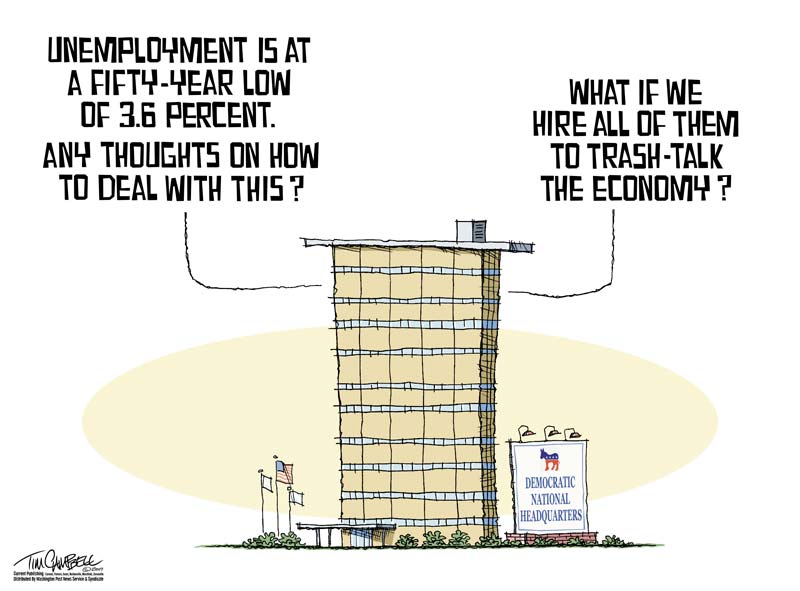 While Nancy Pelosi and other Democrat leaders dismiss the Trump economy as just benefiting the wealthy, my perspective is quite different.

Since I have always resided in or near the inner cities of New York, it is quite obvious that these leaders have no idea what is happening in these neighborhoods. Help Wanted signs are posted in about every small business which no longer has to suffer the Obamacare mandates. Houses are undergoing renovations for the first time in years. The nearby housing project parking lots are filled with brand new vehicles. Restaurants now have packed dining rooms and waiting lists with many of their customers being people of color.

My adult children are enjoying larger paychecks and bonuses but most importantly more favorable tax returns.

Taxpayers previously filing short forms because they do not have sufficient real estate deductions now find their standard deductions and child exemptions doubled. The booming economy has also benefited senior citizen homeowners. One parishioner in my neighborhood told me that for the first time in her life she has enough money to pay all her bills on time. The wolf is no longer at her door because she was able to secure a reverse mortgage she couldn't qualify for before.

The booming economy caused her house value to zoom and bought developers streaming into our area.

Nevertheless, the lapdogs in the mainstream media continue to spread doom and gloom and skepticism in every column and broadcast. A very sage young man I know, who happens to belong to a minority group said to me, "I don't give a s***t if the corporations get tax breaks. They the ones who hire people like me.” Likewise, no one I know, Dem or Rep, gives a fig about Trump's tax returns.

In fact, if the government wants to prolong the boom, they should offer an even lower corporate tax rate, perhaps, one even lower than anywhere globally. Imagine what would happen. All American companies would come back home. Alleluia!

The most asinine response from the leftist Dems is their claim that the great economy belongs to President Obama. What this president is responsible for is 8 years of stagnant growth thanks to Obamacare and its god-awful mandate that crippled small businesses. Did anyone you know ever get funds from the Obama stimulus package? Probably not. But plenty of Democrat donors like Solyndra got millions from the taxpayers and when it failed, we took the loss. The only thing that grew in the Obama years was unemployment and people on food stamps.

2020 presidential candidate Corey Booker said recently, ""You have people on my block — I'm the only presidential candidate that lives in a low-income inner-city neighborhood. Talk to folks, and they'll tell you: 'I have to work two jobs just to try to keep myself in housing. And, by the way, that housing isn't reflected in any of my family.'"

Booker also said on CNN's State of the Union: "Americans are struggling. Their wages are too low ... for the last four decades, I don't think they've budged that much ... We've got to make sure that this is a shared recovery, because, right now, it definitely is not."

Spartacus is full of it. He actually grew up in a middle class household but voluntarily moved into a housing project. Why you may ask? To get real, I suppose; to get down with his brothers so he could get elected which has worked for him in the past. I suspect that his poor, downtrodden neighbors view him as an inauthentic, wannabee soul brother.

Here's the fact that Booker and the Democrat elites just don't get. If there are any able-bodied individuals not working it's because they are not looking. All types of jobs are available but let's face it. It's so much easier to collect a government check, government housing subsidies and food stamps than it is to leave Uncle Sam's plantation.

Booker may be the only presidential candidate who lives in a low-income inner city neighborhood but I will claim to be the poorest conservative pundit and I'm not even that poor anymore.

My neighborhood in Staten Island has been designated the Wu-Tang Clan district. The housing project a few blocks from my home once sheltered two cop killers. All six of my children attended an inner city parochial school which the archdiocese stupidly decided to close. I have never earned more than 35K a year but all my children are earning considerably more. Thank the Lord.

Whenever I visit Costco or other giant warehouses in New York and New Jersey, I see people of all colors wheeling out shopping carts full of food, computers or wide screen TV's. The Chinese restaurant I dine out frequently has a once empty party room that is now booked solid with celebrations of every ethnic holiday. Yet the media continues to hawk the Democrat talk that the tax breaks and the economy isn't reaching the poor.

Both in the Christian and Hebrew Bibles, we are told that the poor will always be with us What the Democrats don't seem to realize is that poverty will not be erased by government handouts.

Deuteronomy 15:11 ; For the poor will never cease out of the land: therefore I command you, saying, You shall surely open your hand to your brother, to your needy, and to your poor, in your land.

What the Trump booming economy has done is give all Americans the opportunities, abilities and resources to help others and ourselves without begging for help from a soulless government. We are truly blessed.