How Europe's 'Identitarians' are mainstreaming racism 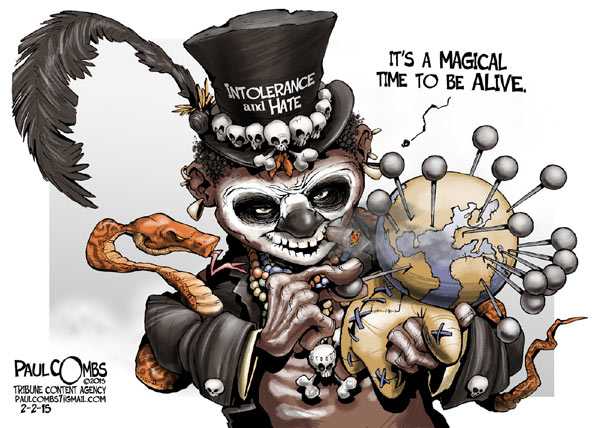 Was it an invitation to cocktails or the start of a far-right conspiracy? In Europe, these days, it can be hard to tell. But this last week Austrian media are reporting that the links between Martin Sellner and Brenton Tarrant were rather more extensive.

Sellner is the clean-cut leader of the Austrian Identitarian Movement; Tarrant is the man charged with shooting up two mosques in Christchurch, New Zealand. The two exchanged emails in 2018 after Tarrant made a donation to the Identitarians; Sellner sent Tarrant a link to his YouTube page and invited him for a beer in Vienna. Tarrant booked a hotel in Vienna, though we don't know if he got there.

Why does it matter? Because Sellner represents a curious phenomenon in European politics: the far-right middleman. Unlike the neo-Nazis of old, the Identitarians don't wear jackboots, don't shave their heads, don't lurk in the shadows.

They have slick websites, professional videos and formal organizations in several European countries, including Britain, France and Germany, as well as Austria. They attract attention with "happenings" - interrupting a play performed by refugees and pouring fake blood on the stage - rather than just marching and shouting. They claim they aren't racists, that they respect all cultures - and insist that they just want to preserve their own.


Quietly, they maintain links with extremists like Tarrant while also socializing with the now-mainstream politicians of the "far-right" Austrian Freedom Party, which is a part of the current Austrian ruling coalition. And, in practice, they are steadily pushing racist, conspiratorial thinking from the fringes of the internet into the political mainstream - and not just in Austria.

Of course they deny that this is what they are doing. In a video he made in English - the Identitarians are keen to be in touch with their white-supremacist American counterparts - Sellner describes himself as a "patriot," shows off the lovely Austrian countryside, and talks about free speech and cultural identity. Everyone else denies that this is what they are doing, too: Heinz-Christian Strache, the Freedom Party leader and vice chancellor of Austria, sued to stop the circulation of a photo of himself having dinner with several Identitarians. The suit failed; but Strache has just been taped musing, among other things, about how he might take control of the Austrian press, so perhaps he'll find a way.

Nevertheless, the movement's ideas have crept into the Freedom Party's official language. Pay attention when you hear the phrase "Great Replacement," which Strache has used in Facebook posts: This is a secret plot, believed to be orchestrated by Jews, to replace white Europeans with Muslims, and it is the central Identitarian myth. Also pay attention when you hear talk of "defending Europe" from "invasion," and of the need for "remigration" (or, less politely, ethnic cleansing).

These are Identitarian ideas, too, and they are spreading quickly. The Institute for Strategic Dialogue in London has tracked online references to the "Great Replacement" and discovered some 1.5 million on Twitter alone. The institute has also tracked the term "remigration," which began spreading in Germany following meetings between the Identitarians and the Alternative for Germany (AfD), the far-right party that is now the third-largest group in the German parliament.

Not all of this is new: Jacob Davey, the author of a forthcoming Institute for Strategic Dialogue paper on this subject, told me that fears of "white genocide" date back decades. But new communications technologies, plus the new international coordination of the far right, plus current politics - the migration crisis and jihadist terrorist wave - have created a perfect storm. Davey calls it a "linking tool" that taps into different debates all over the world. It also radicalizes.

The "Great Replacement" conspiracy theory provides a path from mainstream conversations about the impact of migration and the compatibility of Islam and democracy to calls for mass "remigration" - to the legitimization of murder. Most people won't be radicalized all the way, but a few will. To its more unbalanced adherents, fears of a "Great Replacement" create a sense of urgency, of an existential crisis that requires immediate, violent action.

I'm explaining all of this because it's also the hidden background to a number of recent news stories. The "manifesto" published by Tarrant referred explicitly to migrant "invasions." The synagogue shooting suspect in Poway, California,said he believed that "global Jewish elites" were secretly plotting to change the ethnic composition of the United States.


The Pittsburgh synagogue shooting suspect also said Jewish organizations were bringing in "hostile invaders." The obsession with the Jewish financier George Soros, a feature of far-right propaganda everywhere from Hungary to Alabama, is linked to this set of ideas.

All of this presents a dilemma for Austrian police and, indeed, American police. Sellner is not a terrorist. But does his movement inspire terrorism? Clearly he is entitled to freedom of speech. But is that speech shaping the political debate in ways that could lead to violence? He has been banned from entering the United States and is under investigation in Austria.

But the questions he poses aren't strictly legal; they are moral, political or, perhaps, digital. And, as of yet, we don't have answers to them.