Rep. Liz Cheney confronts a dilemma and the GOP wonders: How high can she go? 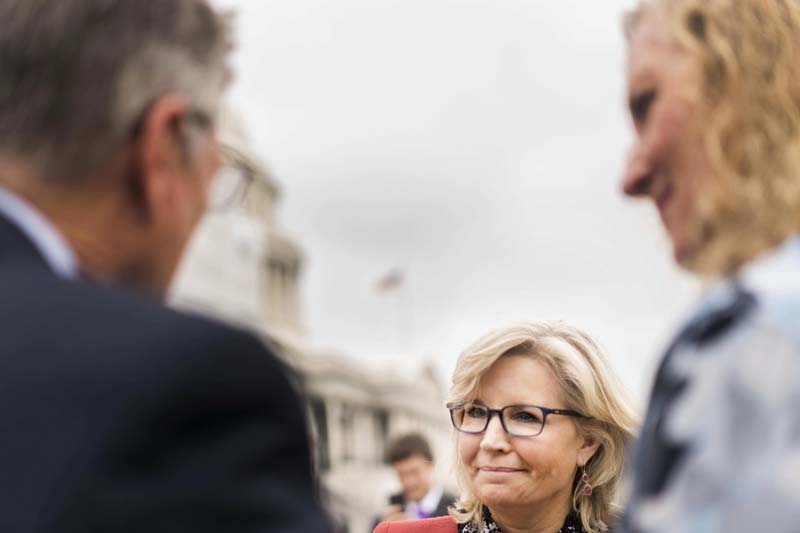 Rep. Liz Cheney has spent only six months as a senior House leader, winning rave reviews from fellow Republicans. Now she's suddenly facing a dilemma over whether to take her talents to the other side of the Capitol.

The decision - whether to continue her quick ascent in the House leadership or instead seek to succeed retiring Wyoming Sen. Mike Enzi next year - is not only momentous for Cheney, but it's one her entire party is watching closely.

The daughter of former Vice President Richard Cheney, as the Republican Conference chairwoman, is one of only a handful of GOP women who have risen in the highest ranks of Washington politics and might credibly appear on a national ticket in the near future.

And while she has stood squarely behind the populist policies of President Donald Trump, Liz Cheney has also forged a profile focused on a strong national defense and muscular foreign policy - leading some Republicans to see her as a figure who could, after Trump's departure from the public stage, bring the party back to its hawkish roots.

Cheney "represents what normal people think of as a statesman, voice and presence for the future of the party," said Mary Matalin, the veteran GOP consultant and a family confidant. "Liz has that rare policy-political 'leader gene.' . . . She could go in any direction."


Cheney, a 52-year-old mother of five, is not shedding any light on her thinking in the immediate aftermath of Enzi's surprise decision not to seek a fifth term. She declined an interview request and brushed off questions about her future at a news conference this week.

Ruling nothing out, she instead pivoted immediately into the blunt, focused messaging that has won her fans across the Republican firmament.

"We really are at the opening phases of a huge ideological battle in this nation, and it's one that Nancy Pelosi and the Democrats in the House have clearly come down on the side of socialism," she said, adding: "I don't have any announcements to make beyond that."

Still, the outlines of her choice are clear. Staying in the House would maintain a Cheney family tradition - her father represented the state's at-large district for a decade, rising to minority whip before leaving Congress to serve as defense secretary - and give her an excellent opportunity to someday become the first Republican female speaker.

But Cheney has eyed the Senate before, launching an abbreviated primary run against Enzi in 2014, and it's the rare politician who prefers running every two years to every six years. Crossing the Capitol would also give Cheney, who served as a senior State Department official in the George W. Bush administration, a more prominent platform on national security. Her profile would undoubtedly exceed her status as the junior senator from the nation's least populous state.

Another fact of political life: Not since Rep. James Garfield, R-Ohio, won election in 1880 has a sitting member of the House been elected president.

"She is on a shortlist of Republicans you can say with assurance will be at the top at some point, whether it's in the House, the Senate or the White House," said Josh Holmes, a former top aide to Senate Majority Leader Mitch McConnell, R-Ky. "She's got a really unique set of skills and knows how to use them. My sense is that she is, at some point, going to be leading everything in D.C. It's just a matter of from what perch."

Cheney has plenty of time to decide - Wyoming's filing deadline is a year away - and aides say she wants to be respectful of Enzi's retirement announcement as she deliberates. But potential rivals for the Republican nomination - which is tantamount to election in Wyoming, particularly in a presidential election year - may not be so patient, and Republicans expect Cheney to make her intentions known well before the end of the year.

"She's terrific, and she'll make a decision and make an announcement when she feels the time is appropriate," said Sen. John Barrasso, R-Wyo.

Her predecessor in the House - former Rep. Cynthia Lummis, who has a base in the southeastern part of the state - is reportedly pondering a run, while former Gov. Matt Mead and businessman Foster Friess could also join the race.

Should Cheney decide to run for Senate, it would pose a twin headache for House Republicans. Under House GOP rules, she would have to immediately resign as conference chairwoman - the No. 3 post - upon seeking statewide office, sparking a potentially divisive leadership race in the middle of a presidential campaign cycle. More worrisome to some Republicans, that would also mean losing the only woman in the House GOP leadership and one of its most effective messengers.

"I want to keep her here. We have big plans for Liz. The country has big plans for Liz," said Rep. Steve Womack, R-Ark., the ranking member of the House Budget Committee and a close friend. "That's the selfish part of me. The more selfless part of me is, she needs to make the decision based on where she believes she can make the difference. And I don't care where she is, she's going to make a huge difference."

Cheney's blunt, no-nonsense approach - and her aversion to identity politics - was on display last week as she led a news conference honoring Gold Star families ahead of Mother's Day. Standing behind a podium emblazoned with the phrase "SECURITY MATTERS," she criticized those who draw a narrow definition of "women's issues."

"We should never presume that national security is not a women's issue," Cheney declared to the cameras, with a half-dozen House colleagues and White House counselor Kellyanne Conway beside her. "We aren't going to only talk about certain issues when it comes to women. We don't, on our side of the aisle, believe in that."

Adding to her sharp words highlighting national security matters and decrying the doings of left-wing Democrats, she has also emerged as a fierce critic of anti-Semitism and bigotry. She was among the first Republicans to call for sanctions for Rep. Steve King, R-Iowa, after he made comments sympathetic to white nationalism, but most of her fire has been trained at Democrats - particularly freshman Rep. Ilhan Omar, D-Minn., whose criticism of Israel has veered into offensive territory for many lawmakers.

On Friday, after Omar took a swipe at Cheney on Twitter, Cheney fired back by calling Omar "an anti-Semitic Socialist who slanders US troops and carries water for Hamas and Maduro," a reference to the Venezuelan President NicolĂˇs Maduro. That hair-trigger has won her fans on her party's right flank.

Rep. Mark Meadows, R-N.C., chairman of the House Freedom Caucus, questioned this week whether Cheney faced much of a dilemma given that there's no guarantee that Republicans regain the House majority in 2020 while the Senate GOP is in better shape.

"I mean, being GOP conference chair in the minority versus being a senator? Pretty easy call for me," he said.

But one Republican, who spoke on the condition of anonymity to discuss factors weighing on Cheney's thinking, said it was not a foregone conclusion that she would leave the House, saying she's "getting to like it more than she thought she would."

"I don't think it's an uncomfortable place for her as it has been for many, but if she has national ambitions, the House is incompatible with that," the person said. "At the age and the trajectory and the pedigree that Liz Cheney has, I think you have to look seriously at the national stage. And if that's what you're looking at, the Senate would make a lot more sense."

Multiple Republicans all said that these are all considerations that Cheney knows well, and they note that there is probably not a lot that anyone who is not in her own family - including McConnell or other Republican leaders - can say to swing her one way or the other.

"We're not guidance counselors here in high school trying to help somebody figure out what's next," said Rep. Mark Walker, R-N.C., the conference vice chairman. "I think her family's been around for a little bit in the political arena."